Big 12 has 2 games this week, 1 delayed and 1 just scheduled 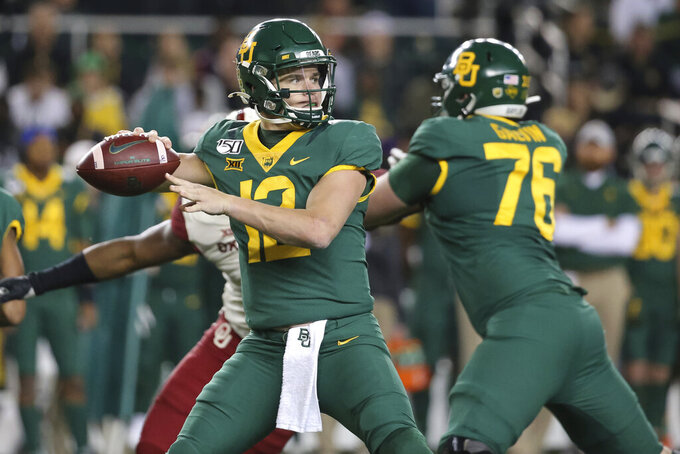 FILE - In this Nov. 16, 2019, file photo, Baylor quarterback Charlie Brewer (12) looks for a receiver during the first half of the team's NCAA college football game against Oklahoma in Waco, Texas. Baylor and Houston play this week for the first time since 1995, when both teams were in the Southwest Conference. Brewer enters his senior season with 7,742 yards passing, third in school history behind 2011 Heisman Trophy winner Robert Griffin III (10,366) and Bryce Petty (8,195). (AP Photo/Ray Carlin, File)

There are two unexpected games in the Big 12 on Saturday, which was initially scheduled as an open date for all 10 teams between the opening of the pandemic-delayed season last weekend and the start of conference games Sept. 26.

— Baylor vs. Houston. The former Southwest Conference rivals are playing for the first time since 1995, the last season of that league. This sudden reunion, plus an additional home-and-home series, only came about last weekend after the Bears and Cougars both had games called off because of opposing teams dealing with COVID-19 outbreaks. The debut of new Baylor head coach Dave Aranda was supposed to be last Saturday against Louisiana Tech, which had a widespread outbreak in the aftermath of Hurricane Laura last month that affected Ruston, Louisiana, more than 200 miles inland. Houston had been scheduled to play this Friday night at Memphis, which also had numerous positive tests. Dana Holgorsen is in his second year as Houston's coach after leaving Big 12 team West Virginia, where he was eight seasons.

— No. 11 Oklahoma State vs. Tulsa. This game was initially scheduled last Saturday, but was postponed five days before that to allow the virus-affected Golden Hurricane more time to prepare for the season. Tulsa had multiple positive COVID-19 tests that led last month to a nine-day pause in workouts and limited the team to seven practices over a 17-day span. Oklahoma State hasn't lost at home to the Golden Hurricane since 1951 — a span of 21 consecutive wins. The Cowboys have preseason AP All-America running back Chuba Hubbard (2,094 yards rushing and 21 TDs) and receiver Tylan Wallace, who had 53 catches for 903 yards and eight TDS in eight games before an ACL tear.

One team still will not have played a game after this week: TCU, which postponed its scheduled Sept. 11 opener against SMU after a cluster of Horned Frogs players and team support staff tested positive for COVID-19. Their first scheduled game is now the Big 12 opener against Iowa State on Sept. 26. ... 0-3 vs. Sun Belt Conference teams, with opening losses by Iowa State, Kansas and Kansas State. ... In the four opening weekend victories for the Big 12, No. 3 Oklahoma, No. 9 Texas and West Virginia won by an average margin of 50 points, and Texas Tech held on 35-33 over FCS team Houston Baptist.

Baylor quarterback Charlie Brewer enters his senior season with 7,742 yards passing, third in school history behind 2011 Heisman Trophy winner Robert Griffin III (10,366) and Bryce Petty (8,195). Brewer can become only the second player in Baylor history to lead the team in passing four consecutive seasons. JJ Joe did that from 1990-93.