Big 12 revenue lower again in pandemic at $34.5M per school 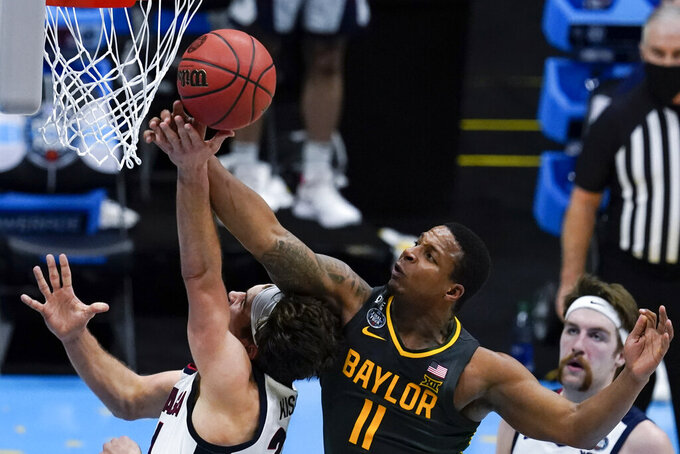 FILE - In this Monday, April 5, 2021 file photo, Baylor guard Mark Vital (11) blocks a shot by Gonzaga forward Corey Kispert during the second half of the championship game in the men's Final Four NCAA college basketball tournament at Lucas Oil Stadium in Indianapolis. The Big 12 Conference is distributing about $345 million of revenue to its 10 schools, the second year in a row the number has been lower because of the COVID-19 pandemic. Commissioner Bob Bowlsby said Tuesday, May 25, 2021 at the end of two days of league board meetings held virtually, that the overall revenue was about $50 million short of what had been expected before COVID-19. (AP Photo/Michael Conroy, File)

The Big 12 Conference is distributing about $345 million of revenue to its 10 schools, the second year in a row that figure has been lower because of the COVID-19 pandemic.

Each school will get about $34.5 million for the 2020-21 fiscal year, down from $37.7 million announced at this time last year when COVID-19 numbers were still on the rise and the NCAA had canceled showcase events including the NCAA men’s and women’s basketball tournaments.

Commissioner Bob Bowlsby said Tuesday, at the end of two days of league board meetings held virtually, that overall revenue was about $50 million short of what had been expected before COVID-19. But considering the uncertainty of things when the current school year began last fall, before widespread vaccinations and lower infection rates, things could have been much worse.

“Looking at it at this time last year or even a couple, three months later than this, if we could have signed up for $35 million, we would have done it in a heartbeat,” Bowlsby said.

While acknowledging there are still variables and unknowns, Bowlsby anticipates Big 12 revenue distribution pushing above $40 million per school next year.

The revenue shortfall of about $50 million this school year was primarily because of reduced money from TV contracts, lower ticket sales and not having a team in the College Football Playoff. There were restrictions on the number of the fans, if any, who could attend games. There were also fewer games to televise during football season.

Each Big 12 football team had a 10-game regular season schedule, with only one nonconference game around its round-robin league schedule. Four league teams played only eight of nine scheduled conference games.

Even without a team in the College Football Playoff, the Big 12 won national championships in men’s basketball (Baylor), men’s swimming and diving (Texas) and women’s tennis (Texas). Oklahoma gymnastics and Texas volleyball were national runner-ups.

While calling it a long and hard year — “There isn’t any way to put a good face on it,” Bowlsby said — the commissioner commended athletes, coaches, trainers and doctors for all they did.

“It’s gratifying in that a whole lot of people had their hands on the oars and worked really hard throughout the year,” he said. “We competed at a very high level this year in a whole bunch of different sports. ... Not because of the achievements, but because we were playing, it almost feels like we didn’t let the virus win.”

The Big 12 didn't provide supplemental revenue distribution like the Southeastern Conference did last week by giving each of its 14 member schools $23 million to help offset the financial impact of COVID-19 on their athletic programs.

Bowlsby said the Big 12 board, made up of the schools' presidents and chancellors, decided last summer to help on an institution-by-institution basis, as needed, rather than an outright supplement to all of them.

“They didn’t want to have to mortgage any of our future in order to take a loan or borrow against TV money or any of those things,” he said.