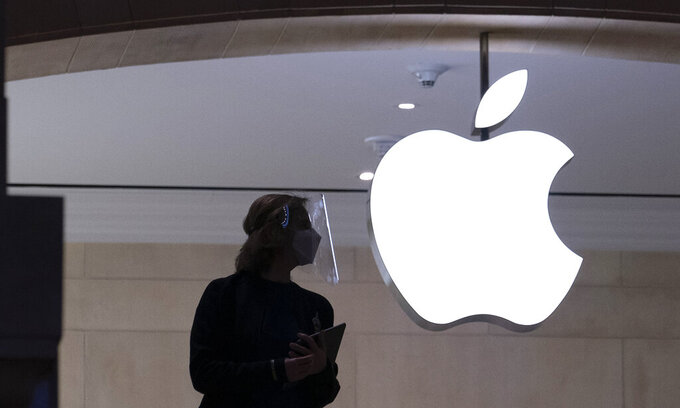 NEW YORK (AP) — Big Tech stocks are flexing their enormous strength again, after getting knocked around a bit earlier this year.

Apple, Microsoft, Amazon, Google's parent company and Facebook all gave profit reports this week that blew past investors' already high expectations. Apple earned 40% more than what Wall Street forecast, for example, leading one analyst to call it a “drop the mic” performance.

The blowout reports are forcing the spotlight back onto this group of stocks that dominate the market like no fivesome ever has before, especially after they lagged behind earlier this year. Shares of each of the Big Five companies jumped between 7% and 16.5% in April, easily beating the S&P 500′s 5.2% rise over the month.

The financial results give some validation to investors who bid up the stocks through the pandemic on expectations they'd weave themselves deeper into everyone's lives, even as the broader economy collapsed around them. Amazon's $108.5 billion in sales last quarter helps show that it “is emerging from the pandemic in an even stronger position than it was before,” UBS analysts led by Michael Lasser said in a report, for example.

Altogether, the five companies make up 21.6% of the S&P 500's entire market value, according to FactSet. That's actually down from the nearly 24% they accounted for at the end of August. But it's a reassertion of their strength after that figure shrunk to 20.7% at the end of March, according to S&P Dow Jones Indices.

It might sound academic, but it's a huge deal for investors and their 401(k) accounts. They've increasingly put their money into funds that precisely mimic the S&P 500 and other indexes. That means someone putting $100 into an S&P 500 index fund now is devoting nearly $22 to just five companies.

Investors saw the downside of concentrating their bets in such a way earlier this year, when Big Tech stocks suddenly lost momentum amid a sharp rise in interest rates.

Apple fell 8.1% in February, for example, while Amazon was virtually flat in March, when the S&P 500 was jumping 4.2%. The sluggish performance for Big Tech held back index funds, and on some days the group singlehandedly sent the S&P 500 to a loss instead of the gain.

As the shine was coming off Big Tech, investors flocked instead to stocks set to benefit more from a reopening economy. Coronavirus vaccines and massive support from the U.S. government and Federal Reserve made investors more interested in banks, airlines and oil companies that could see bigger profit growth than Big Tech, which had remained remarkably steady through the pandemic.

A sharp climb in interest rates also made investors less interested in stocks that looked expensive relative to their earnings, which hurt Big Tech.

But interest rates have leveled off. The yield on the 10-year Treasury has dropped back to 1.62% after topping 1.75% last month. And this week's huge profit numbers for the Big Five mean their stocks don't look quite as expensive relative to their earnings as they used to.

Apple, for example, is trading at its cheapest level since July, when comparing its price against its earnings over the prior 12 months. It's still trading at a pricier level than it has historically, however.

Going forward, though, many professional investors say they're still focusing on other areas of the stock market more than Big Tech. Local governments are removing more restrictions on businesses, the job market is strengthening and Wall Street sees the economy only improving more, which should tilt the strongest growth to smaller companies, banks and other businesses whose profits are more closely tied to the strength of the economy.

Plus, inflation is on the way up again. That has Wall Street anticipating the Federal Reserve will have to slow its monthly purchases of $120 billion in bonds that are meant to keep interest rates low.

That could put pressure on Big Tech stocks, whose climb in market value has tracked in a very similar fashion to the size of central bank balance sheets, according to strategists at BofA Global Research.