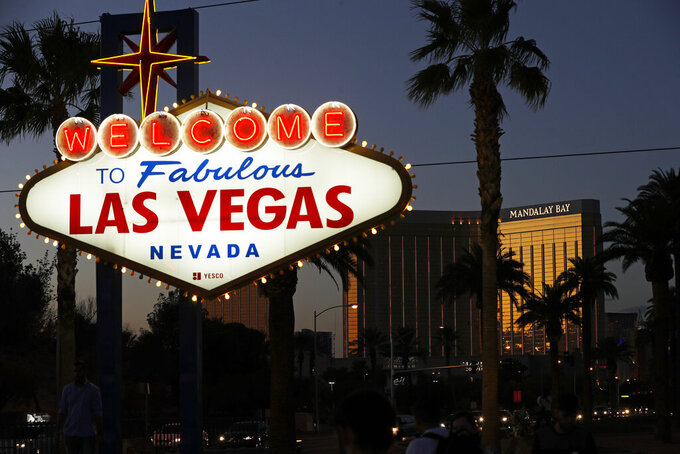 FILE - In this Sept. 21, 2018, file photo, the Mandalay Bay hotel and casino reflects the last sunlight of the day along the Las Vegas Strip in Nevada. Casino owner MGM Resorts International is bringing the coronavirus vaccine to its Las Vegas Strip employees, with the opening of an inoculation clinic at the Mandalay Bay resort convention center. Easing vaccine availability for perhaps thousands of hotel and hospitality workers comes with the University of Nevada, Las Vegas setting a July 1, 2021, date to return to in-person activities. (AP Photo/John Locher, File)

Easing vaccine availability for thousands of hotel and hospitality workers in Nevada’s tourism-dependent city comes with the University of Nevada, Las Vegas setting a July 1 date to return to in-person activities and city workers fanning out following the lifting of sports restrictions to install basketball hoops again at city parks.

MGM Resorts International said Tuesday it saw vaccinations as “a critically important tool in helping to end the pandemic and accelerate our community’s economic recovery.”

Caesars Entertainment Inc. said it will start offering shots Thursday at the Rio for all company workers, with a goal of 10,000 vaccinations in April. It will partner with Albertsons supermarkets to administer up to 2,000 shots per day by appointment only.

MGM Resorts, the largest employer in Nevada, has nine major resorts on the Las Vegas Strip. It had more than 50,000 workers before closures began in March 2020 to stem the spread of COVID-19. The company laid off about one in four of its 70,000 employees nationwide as the pandemic continued. Not all employees have returned to work.

“We’re committed to doing all that we can to help get as many people vaccinated as quickly as possible by removing barriers to access and bringing vaccination clinics directly to our employees,” company spokesman Brian Ahern said in a statement.

He said MGM Resorts would initially be allotted enough vaccine to administer 700 vaccinations a day for five days, or 3,500 doses, the Las Vegas Review-Journal reported. The company vaccinated 1,000 employees during a two-day pilot program last week.

The health district reported nearly 920,000 vaccine doses have been administered in Clark County, and about 334,000 people have completed vaccinations. That’s about 14.4% of the regional Las Vegas population of 2.3 million.

Statewide, more than 18% of people ages 16 and older have been vaccinated, according to the Nevada Department of Health and Human Services.

Vaccination eligibility has expanded in tiers since mid-December. It will open to everyone age 16 and older on April 5.

Nevada has tallied nearly 303,500 cases of COVID-19 in the last year, including 221 cases reported Tuesday. Two more deaths were reported statewide, bringing the number to 5,239.

The state’s 14-day positivity rate, which tracks the percentage of people tested for COVID-19 who are found to be infected, was 4.2%. That is below a World Health Organization goal of 5% before governments relax restrictions.

Cassell estimated the casino, hotel and hospitality industry in Las Vegas may have as many as 180,000 employees. “If everybody was willing to get vaccinated … I would think we would have a very large dent in this in a three- to four-week span,” he said.

Casino companies have to submit clinic plans to the Nevada Gaming Control Board before approval by the health district. A board spokesperson declined to comment Monday.

Wynn Resorts has vaccinated about 3,000 employees at a site operated by University Medical Center since mid-January at the Encore hotel, spokesman Michael Weaver said.

Local casino operator Station Casinos opened permanent medical clinics for employees and their families in December at two of its 10 properties in southern Nevada.