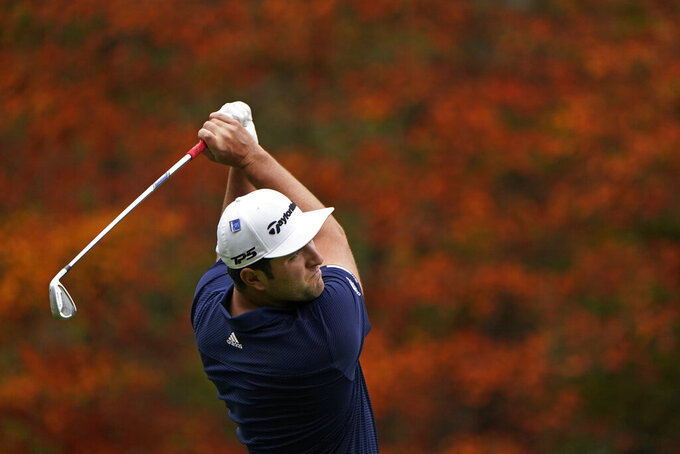 Jon Rahm, of Spain, tees off on the 11th hole during a practice round for the Masters golf tournament Tuesday, Nov. 10, 2020, in Augusta, Ga. (AP Photo/Chris Carlson)

Jon Rahm would love to add his name to the list.

“There’s such Spanish history of champions here, with three great champions and three idols of mine,” Rahm said Tuesday before a practice round at the Masters. “Five green jackets go out to Spain. Hopefully, I can be the sixth.”

A two-time winner this year who rose to No. 1 in the world for the first time in his career, Rahm's lack of a major victory remains the biggest hole in his resume.

He has come close at Augusta National, posting top 10s in his last two trips here, including a fourth-place finish in 2018.

And so far, he's having quite a week.

In practice Monday, Rahm made a hole-in-one on the fourth hole with a 5-iron. And then on Tuesday, during the traditional attempt to skip a ball over the pond in front of the 16th green, Rahm hit 4-iron that bounced four times on the surface of the water, clipped the embankment and rolled all the way around the back of the green and into the hole.

“The craziest thing. The second hole-in-one of the week,” he said. “It could go two ways, right? Something special going on, or I’m just running out of luck already. So I don’t know.

"I knew it would be a special week given it’s my birthday today, so I’m hoping it’s the beginning of a lot of good things to come.”

Rahm, who turned 26 on Tuesday, said he hasn’t lost the thrill of playing at Augusta National.

“I always get the same feel as I did the first time when I go down Magnolia Lane,” he said. “Each day: Yesterday, today, tomorrow, and every day this week, I’m still going to have those butterflies in my stomach because it’s such an iconic place for golfers.”

Rahm arrives at Augusta after a breakthrough year in which he won the Memorial and the BMW Championship — his first season with multiple PGA Tour victories — to finish fourth in the FedEx Cup standings. He has 11 wins worldwide since he turned pro in 2016 and joins Justin Thomas, Bryson DeChambeau and Dustin Johnson as the only players with at least one PGA Tour win in each of the past four seasons.

Rahm finished second in his last event, the Zozo Championship at Sherwood.

“I can’t lie, I’m feeling pretty confident,” he said. “I think the best way I can explain it (is) I’m simply happy, outside the golf course, I’m happy, within the limits of now this pandemic, and I’m also happy on the golf course. ... Hopefully something special happens this weekend.”

Garcia said he began to have a sore throat and a cough when he was driving home to Austin, Texas, on Saturday night after missing the cut in the Houston Open. It’s the first major Garcia will miss since the 1999 U.S. Open.

“A little bit sad that Sergio is not going to be able to be part of this. My heart goes out to him,” Rahm said. “Knowing how special this week is for him, hoping a speedy recovery for him.”

Rahm said he has barely eaten out since the pandemic started — and even then, only when he can be sure it is safe. He uses his own towel and doesn’t approach anyone on the tee box.

Although he high-fived a caddie after his hole-in-one on Tuesday, that will have to do it for the hoopla.

“Hopefully, because of being the week that it is and what’s going on in the world,” he said, “I think all celebrations are going to have to be postponed to when it’s obviously a little less dangerous.”