Black Lives Matter faces test of its influence in election 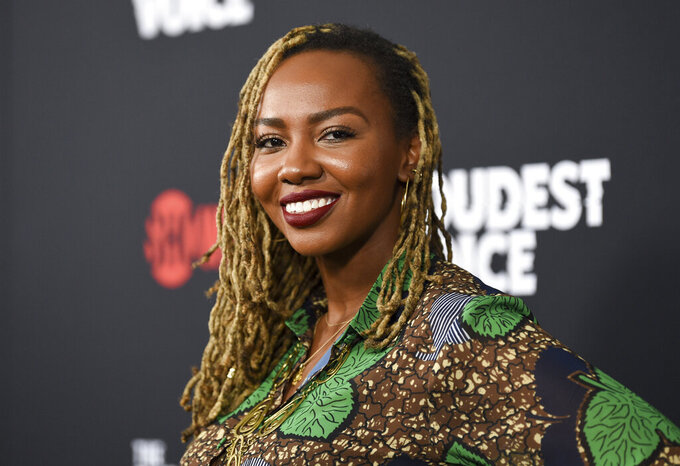 FILE - In this June 24, 2019, file photo, Black Lives Matter co-founder Opal Tometi attends the premiere of the ShowTime limited series "The Loudest Voice" at the Paris Theatre in New York. Several years since its founding, BLM has evolved well beyond the initial aspirations of its early supporters. Tometi was one of the three women who founded BLM. (Photo by Evan Agostini/Invision/AP, File)

NEW YORK (AP) — Black Lives Matter has been a lot of things in its brief, fiery life.

It has been a slogan, a rallying point. A movement that led protests coast to coast, calling for America to get serious about preventing Black deaths at the hands of law enforcement. A heaven-sent resource for people like Helen Jones, desperate for justice after her son died in a Los Angeles County jail.

“Black Lives Matter saved us, because we had nobody,” said Jones.

Now, BLM’s influence faces a test, as voters in Tuesday’s election consider candidates who endorsed or denounced the BLM movement amid a national reckoning on race.

“We’re a very young organization with a whole lot of visibility in a really short amount of time,” Patrisse Cullors, one of three BLM co-founders, told The Associated Press. It would be “false,” she said, “for anyone to put it on us solely around what happens in this election cycle.”

And in fact, many Republican and Democratic candidates vying for federal, state and local office have moved vociferously toward the political center or further to the right, making it clear that they “back the blue” or do not support calls for defunding the police. Neither President Donald Trump nor former Vice President Joe Biden would reduce police budgets in local communities.

Still, there are reasons for BLM supporters to feel optimistic, some activists say. The group is flush with cash, which it is using in the hopes of playing a significant role in the election. There is a growing roster of candidates who’ve been nurtured, inspired or supported by the movement: For example, St. Louis area residents are all but certain to elect Cori Bush, a Ferguson protester who is running for Congress.

“For the first time, people can hear and consider candidates who will come out and acknowledge the fact that police commit harms against Black and brown folks,” said Tiffany Cabán, a national political organizer for the Working Families Party who helped the party recruit progressive-minded prosecutors.

In the blink of an eye, BLM has gone from social media hashtag to an immensely influential movement and an organization with millions of dollars at its disposal to push messaging around defunding police departments as a way of addressing systemic racism.

It began just seven years ago, with the emergence of the movement amid its organizers’ outrage over the acquittal of George Zimmerman, the Florida man who killed 17-year-old Trayvon Martin.

A year later, BLM marched onto the global stage after an uprising in the wake of Michael Brown’s death at the hands of a white police officer in Ferguson, Missouri.

The three women who founded BLM were already activist powerhouses. Cullors had established her own social justice organization in Los Angeles, Power and Dignity Now. Opal Tometi had been executive director of the Black Alliance for Just Immigration, advocating for social and economic prosperity of Black immigrants to the U.S. Alicia Garza, had been a special projects director at the National Domestic Workers Alliance, fighting for the rights of professional nannies and other caregivers.

They saw the need to make BLM more than a slogan, Garza said.

“We were getting people who were wanting to start chapters, and they were from all over the place,” she said. “We would be asking them, ‘Well, what else do you have in your community?’ And they would say, ‘Nothing.’ We were in the middle of a literal storm and needing to fly a plane as you’re building it.”

BLM formed a network of chapters in 2015, building infrastructure and an organization that drew funding from celebrities like Beyoncé, Jay-Z and Prince.

Its first-ever Los Angeles chapter came to the aid of Helen Jones. She believes her 22-year-old son, John Thomas Horton III, was murdered in 2009 through neglect of sheriff’s deputies who stuck him in a closet-sized, windowless cell and left him in solitary confinement for weeks. Though officials determined that Horton hanged himself, Jones said injuries on his body suggest that he was brutally beaten.

She needed a champion to keep her son’s case in the spotlight. Enter Black Lives Matter. She worked with local movement organizers and other victims’ families to demand stronger civilian oversight of the county jails via a 2020 ballot initiative. Voters approved the measure in March, granting a sheriff oversight commission subpoena powers to investigate civilian complaints.

BLM’s profile increased quickly. In 2017, the founders were awarded the Sydney Peace Prize.

In 2018, Cullors appeared on stage at the Academy Awards ceremony with prominent voices in the #MeToo and transgender rights movements. Across social media platforms, the Black Lives Matter movement boasts a following of millions.

“I think over the past seven or eight years, so many people within Black Lives Matter have been asking what started out as questions that were only ever asked in academia — questions like, ‘What can we do about police brutality?’ and 'What to do when we feel we can’t call the police,'" said Janaya Khan, the network’s international ambassador and co-founder of its Canadian branch.

“So now in this time of pandemic, when so many people are experiencing a kind of precarity, one that so many Black people already know intimately, there are questions that they’re asking and we have some answers that we can offer,” Khan said.

Since the wave of protests sparked by George Floyd’s death at the hands of Minneapolis police in May, BLM has undergone a somewhat quiet transformation. As the words “Black lives matter” began appearing in city-sanctioned street murals coast to coast, the BLM network banked millions of dollars from a surge of donations — so much that Cullors established a grant fund of more than $12 million.

While Garza and Tometi stepped away from day-to-day stewardship of BLM years ago, Cullors remains executive director of the Black Lives Matter Global Network Foundation. Its existing chapters, including those in Los Angeles, Chicago and Detroit, are now autonomous entities that are eligible to receive funding from the network, Cullors said.

Broad visibility and influence have come at a high personal cost for prominent BLM voices. “Black Lives Matter,” as a slogan, elicited “All Lives Matter” and “Blue Lives Matter” responses from foes. It also meant Cullors, Garza, Tometi and many others associated with the BLM movement have faced threats, as well as surveillance by local and federal law enforcement, Cullors said.

Days before the election, Cullors released a video announcing she and Garza had been contacted by the FBI after their names were found on a list of activists a white supremacist allegedly intended to harm.

“No threats against me or my movement will stop this revolution,” Cullors said in the video. “And we will be here. We will show up to the polls and we will organize.”

BLM has launched a political action committee to support candidates, campaigns and legislation. And as the voting wraps up, the organization is hosting pandemic-safe drive-in rallies, text-banking voters and leveraging its millions to run ads focused on increasing the Black vote.

One aim is to press sweeping federal legislation known as the BREATHE Act, a bill drafted by the policy table of the Movement for Black Lives, a coalition formed in 2014 that now includes more than 150 affiliate organizations that make up the broad Black liberation struggle.

The act, not yet introduced in Congress, would divest federal resources from incarceration and policing, including the elimination of a Department of Defense program that allows local law enforcement agencies to obtain excess military equipment — equipment that has been used against BLM protests.

At the state and local level, the Working Families Party, a coalition member, said it expects a stellar Election Day performance from its slate of progressive district attorney candidates in Texas, Illinois, Missouri, Michigan, Colorado and Florida. The candidates, some of them incumbents, have pledged to take up or continue policies such as declining to prosecute low-level drug offenses, not seeking cash bail, and holding police accountable for brutality.

There is some concern that the results of the presidential election might be misinterpreted as either an endorsement or a rejection of BLM.

“I do worry that people will see a Biden victory and say that it shows Black Lives Matter was supported,” said Justin Hansford, a Ferguson protester and law professor who now serves as director of the Thurgood Marshall Civil Rights Center at Howard University. “That’s sort of like the most twisted thing you can think, because he has adamantly stated that he will increase police budgets.”

Biden has supported providing more funding to law enforcement so that they can hire and train officers to better deal with calls involving emotionally distressed or mentally ill citizens. Trump has threatened to pull federal funding from cities that vote to decrease police department funding.

“If there’s going to be any sort of success for Black Lives Matter on a political platform,” Hansford said, “it’s going to be traction at the local level, in cities and states across the country.”

Morrison is a member of the AP’s Race and Ethnicity team. Follow Morrison on Twitter at https://twitter.com/aaronlmorrison.