Black men's votes courted as some search for political home 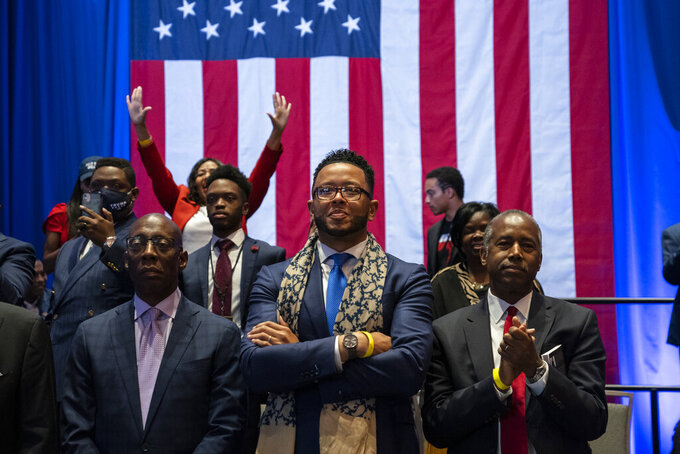 FILE - In this Sept. 25, 2020, file photo, supporters listen as President Donald Trump speaks during a campaign event at the Cobb Galleria Centre in Atlanta. Following an unprecedented surge of protests against racial injustice and the killing of Black people by law enforcement, partisan and nonpartisan organizations have poured significant resources into increasing Black men’s participation in the election. (AP Photo/Evan Vucci, File)

As an activist and organizer who gained acclaim after leading protests in Florida over the 2012 shooting death of Trayvon Martin, Agnew sees an opportunity to keep the 14.4 million Black men of voting age politically engaged well beyond 2020.

That effort begins with keeping it real about this year’s candidates. Trump’s positions on race and Biden’s decades-old controversial record on criminal justice make neither candidate particularly attractive to Black men.

“You don’t lie, you acknowledge the truth, and admit that the choices before Black people in the year 2020 are abysmal,” said Agnew, an organizer with Black Men Build, a group created to empower Black men.

His group has paid to run targeted ads on TV and music-streaming services such as Hulu and Spotify, supplemented by mailers and organizers on the ground. The message is geared toward Black men who feel politically homeless.

“We are not choosing a champion, we are choosing an opponent,” Agnew said, adding that he is also telling Black men that “a Biden presidency allows for terrain to organize under that is more favorable.”

Following an unprecedented surge of protests against racial injustice and the killing of Black people by law enforcement, partisan and nonpartisan organizations have poured significant resources into increasing Black men’s participation in the election.

And they’re doing so with an acknowledgement that no major political party can lay claim to being a consistently loyal advocate for Black men and women. Whoever comes out ahead among Black men, advocates say, will have succeeded in reaching more of those who are apathetic or feel politically left out.

Iraq War veteran Leo Dunson is a 35-year-old Black conservative activist and former Democrat who feels both parties have forgotten Black men. Dunson said he's not planning on voting for Biden or Trump, and is disappointed with how both major parties handled providing relief for Black Americans during the coronavirus pandemic.

Black men “would be job creators too, if you gave us $100 million,” he said, criticizing the relief funding that went mostly to large, white-owned corporations.

In a political party, Dunson said he now wants “to find something that is going to work for us.”

There’s evidence that get-out-the-vote campaigns targeting Black men have worked. As of Wednesday, more than 67.1 million votes had been cast in the 2020 general election, with Black voters making up about 9% of that total — a proportion that is similar to the number of registered voters who are Black.

And 39% of those votes were by Black men — a similar gender breakdown to numbers reported in the 2016 general election. Turnout has been boosted by traditional grassroots organizing within venues like Black churches, where “souls to the polls” campaigns have stressed voting early, in-person or absentee.

Energizing Black men as a voting bloc has been important to both campaigns. While 81% of Black men voted for former Secretary of State Hillary Clinton in 2016, that's still less than the 98% of Black women who did so, according to a Pew Research Center analysis.

And in more than a dozen Black Voices for Trump Community Centers placed in African American neighborhoods, the president’s campaign has been drawing contrasts with Biden and Sen. Kamala Harris on issues of criminal justice and economics.

“In 2016, President Trump asked Black Americans, ‘What the hell do you have to lose?’ The answer was everything,” Kamau Marshall, director of strategic communications for the Biden campaign, said in a statement to The Associated Press.

“Trump has shown us who he is and the American people, along with Black men, won’t fall for more empty promises.”

But Biden isn’t particularly popular among Black men, largely because of his role in passage of the Violent Crime Control and Law Enforcement Act of 1994, federal legislation that lengthened sentences for violent crimes, helped fill prisons and flooded Black communities with police officers. Harris’s tenure as a top prosecutor in California includes the disproportionate incarceration of Black men for drug offenses.

Trump’s appeals to Black men have included touting economic policies early in his administration that led to historic lows in their unemployment rates, funding for historically Black colleges and universities, and setting up so-called opportunity zones for economic redevelopment in distressed Black communities.

“That’s what every Black man wants for his own family,” said Paris Dennard, senior communications adviser for Black media affairs with the Republican National Committee. “To have generational wealth to pass on, to create a business, whether it’s a barbershop or a clothing line.”

But these have been eclipsed by Trump's overtures to white supremacists and denunciation of Black Lives Matter, as well as his response to the coronavirus pandemic, which has disproportionately killed Black people and left many Black men jobless.

In 2008 and 2012, at least nine in 10 Black men and women voted for former President Barack Obama, according to the American National Election Studies surveys of the electorate.

But Black men’s overall election participation has mostly been in decline since 2012, when 61% turned out to vote, according to an AP analysis of the Census Bureau's Current Population Survey data. Turnout fell to 54% in 2016.

In addition, one in 16 Black people of voting age are without the right to vote because of a felony conviction — a disenfranchisement rate 3.7 times higher than that of other races, according to a recent Sentencing Project report. Not only are Black men more likely to be stopped, searched and arrested by police, they were about 2.5 times more likely than white men to be killed by law enforcement between 2013 and 2018, according to a 2019 study published by the National Academy of Sciences.

But, advocates point out, Black men of voting age care about many issues beyond criminal justice and economic prosperity. Health care, education and housing are also on the list.

That's why some desire a new political home where they don’t feel taken for granted or ignored, said Wes Bellamy, national co-chair of the newly launched political platform, Our Black Party.

“We know that there are a lot of Black folks, and Black men in particular, who feel politically homeless,” said Bellamy, who also serves as chairman of the political science department at Virginia State University.

“What we want to say is that, ‘Yes, this is a home for you,’” he said. “We want to endorse and support candidates. And even if we get to the point of getting ballot status later on, we want to make sure we are running folks who put Black first.”

AP data journalist Angeliki Kastanis in Los Angeles contributed. Morrison is a member of the AP’s Race and Ethnicity team. Follow him on Twitter: https://www.twitter.com/aaronlmorrison.