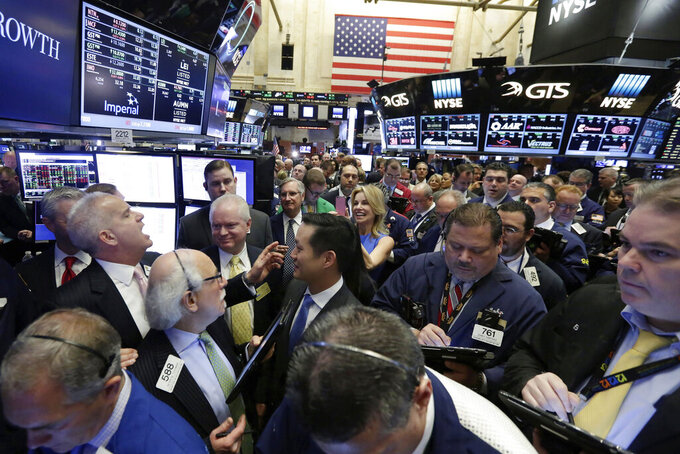 FILE - New York Stock Exchange floor governor Rudy Maas, left, calls out prices during the IPO of MGM Growth Properties on the floor of the NYSE, Wednesday, April 20, 2016. Wall Street has rolled out the welcome mat for companies going public this year, boosting proceeds from initial public offerings to the highest level in six years. Companies that have gone public this year have averaged a return of 53.8% above their IPO price, including a return of 23.4% after their first day of trading, according to Renaissance Capital, an IPO research provider. (AP Photo/Richard Drew, file)

LOS ANGELES (AP) — Wall Street has rolled out the welcome mat for companies going public this year, boosting proceeds from initial public offerings to the highest level in six years.

IPOs slowed sharply in the spring due to the pandemic, but they surged in the summer as the market recovered from a steep slump and rallied to new highs. And so far, betting on IPOs has paid off.

Companies that have gone public this year have averaged a return of 53.8% above their IPO price, including a return of 23.4% after their first day of trading, according to Renaissance Capital, an IPO research provider.

In the 10 years prior, however, the average return after the first day of trading was 3.2%, a track record that includes some flops and is why many analysts caution investors not to follow an IPO just because of the hype.

Household names like DoorDash and Airbnb are the latest IPOs to whet investors’ appetite for solid returns. DoorDash shares surged nearly 86% above their offering price of $102 in their market debut Wednesday. Ahead of the IPO, the delivery service projected it would raise $3.37 billion in the offering. That edges out Snowflake for the biggest IPO so far this year, according to Renaissance Capital.

Airbnb’s own market debut on Thursday could end up blowing past that.

“This year had a lot of large IPOs,” said Matthew Kennedy, senior IPO market strategist at Renaissance Capital. “And its had the most billion-dollar IPOs ever.”

This year is projected to finish with 210 IPOs raising about $80 billion combined, Kennedy said. That would be up from 160 IPOs and $46 billion in proceeds last year, and the highest level since 2014.

The backdrop for companies going public this year has been more than welcoming. The Federal Reserve has kept interest rates near zero since this spring in a bid to support the economy through its pandemic-driven recession. That helped pave the way for stocks to climb to new highs and gave companies confidence to go public.

Airbnb put off a market debut in the spring when the pandemic crippled global travel. It's hoping to raise as much as $3.4 billion in its IPO. The San Francisco company expects to price its shares between $56 and $60 each, up from a planned range of $44 to $50 issued last week.

Some 18 company IPOs have brought in over a billion dollars, including DoorDash. Four others, including Airbnb, are also expected to cross the billion-dollar threshold.

Still, individual investors may want to consider waiting a few days after a company has its IPO, if not longer.

Consider that about half of U.S.-based companies that went public from 2015 to 2019, including Uber Technologies, Fitbit and Blue Apron, were trading below their IPO prices a year later. It took Facebook 15 months to trade above its IPO price.

“Looking back at history, it’s pretty much been a coin toss as to how these stocks perform a year after they go public,” said Lindsey Bell, chief investment strategist at Ally Invest.

Investors need to make sure they are buying into an IPO because they believe in the company’s prospects for earnings growth and avoid being swept away by the hype that tends to form around big-name stocks.

Another consideration is whether a company has proven it can make a profit. Uber, which raised $8.1 billion in its market debut last year, has yet to get out of the red.

“I wouldn’t count out an IPO that was losing money, but I would want to make sure that company has a solid plan to get to profitability within a couple of years or whenever you feel comfortable,” Bell said.

And while it may be tempting to buy stocks of companies whose products or services we see or use often, that’s also not a sound approach. “Investing in what you know” doesn’t mean buying DoorDash because you order food every other day. It means knowing whether DoorDash will get enough customers at high-enough prices to remain profitable, and at what level.

One way for investors to get a slice of a hot IPO prospect is to wait beyond the company's market debut until the stock makes its way into index funds, which own baskets of many stocks and generally come with low fees.

The Renaissance IPO ETF, which tracks an index that holds companies that have had an IPO within the last two years, giving more weight to bigger ones, is up 108% this year. The S&P 500 is up about 14%.

“Trading on an IPO day tends to be full of emotion, and most investors should steer clear of emotional investing,” said Willie Delwiche, investment strategist at Baird. “Allow some time to pass and get a sense of what’s going on with a stock or with a company.”