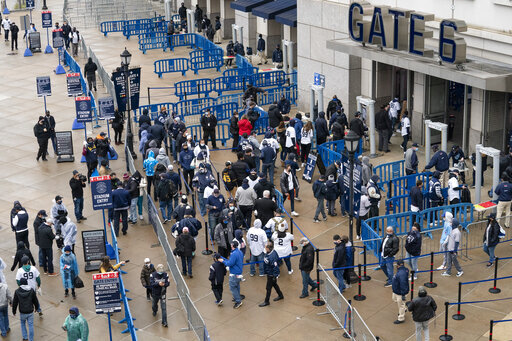 Spectators wait on a security line outside Yankee Stadium before an opening day baseball game against the Toronto Blue Jays, Thursday, April 1, 2021, in the Bronx borough of New York. Fans are back at the ballpark in limited numbers after they were shut out completely during the regular season last year due to the COVID-19 pandemic.(AP Photo/John Minchillo) 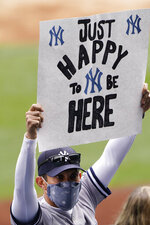 NEW YORK (AP) — Randal Grichuk led off the 10th with an RBI double, and the Toronto Blue Jays took advantage of the second year of starting extra innings with a runner on second to beat the New York Yankees 3-2 Thursday in the major league opener.

Fans returned to Yankee Stadium for the first time since 2019. Capacity was limited to 20% because of coronavirus protocols, and the attendance was announced as 10,850.

Jordan Romano (1-0) escaped trouble in the ninth with the help of third baseman Cavan Biggio. After pinch-runner Michael Tauchman stole two bases, he was thrown out at the plate by Biggio trying to score on a grounder by AL batting champion DJ LeMahieu. Romano then struck out Aaron Judge to strand two runners.

Nick Nelson (0-1) relieved to begin the 10th and with pinch-runner Jonathan Davis on second, Grichuk lined his second pitch over Judge in right.

Julian Merryweather struck out Aaron Hicks, Giancarlo Stanton and Gleyber Torres on 11 pitches for the save.

Teoscar Hernández hit a tying homer in the sixth off Gerrit Cole as Toronto improved to 23-22 in openers.

New York lost for the first time in four openers under manager Aaron Boone. The Yankees had not played an extra-inning opener since 1987.

Fans were at Yankee Stadium for the first time in 532 days since the loss to Houston in Game 5 of the AL Championship Series on Oct, 18, 2019. They had to show proof of complete vaccination at least two weeks earlier or a recent negative COVID-19 test. Masks were required and groups of fans separated by empty seats into pods.

On an afternoon with a game time temperature of 43 degrees, some fans entered the stadium with navy Yankees blankets that were still wrapped in plastic. Some wore jerseys with famous retired numbers such as 5 (Joe DiMaggio) and 8 (Yogi Berra). Many stopped by the concession stands; there were no vendors in the aisles.

Players lined up on the baselines for the traditional introductions that were dispensed with during the pandemic-shortened season, the Yankees in their pinstripes, the Blue Jays in powder blue.

There was no traditional bunting or opening day logos, and the nationals anthems were played on video.

A reduced group of Bleacher Creatures shouted the Roll Call from the right-field seats in the top of the first, and first baseman Jay Bruce raised his right arm in a spirited response. Cole turned to the bleachers to survey the scene when Biggio’s foul ball provided a momentary break.

The pitcher’s parents, Mark and Sharon Cole, planned to be in the stands for their first chance to watch him pitch at Yankee Stadium along with sister Sharon Cole and mother-in-law Lynn Crawford, the mother of San Francisco shortstop Brandon Crawford. Lynn Crawford was going to see grandchild Caden Cole, born last June 30.

Cole, starting the second season of his $324 million, nine-year deal, allowed two runs and five hits in 5 1/3 innings with eight strikeouts and two starts. He fell behind on Lourdes Gurriel Jr.‘s RBI single in the second and allowed Hernández’s 437-foot home run in the sixth.

Toronto’s Hyun Jin Ryu gave up two runs and four hits in 5 1/3 innings, and David Phelps escaped a bases-loaded jam in the seventh by getting Judge to ground into an inning-ending double play.

Gary Sánchez hit a two-run homer in the second. Sánchez didn’t homer until his 10th game last year, part of a miserable season in which he hit a career-worst .147 with 10 homers and 24 RBIs in 156 at-bats.

After playing home games last year at the field of their Triple-A team in Buffalo, due to Canadian government coronavirus restrictions, the Blue Jays have shifted their first three homestands this season to their spring training ballpark in Dunedin, Florida.

Aroldis Chapman was suspended for the first two games by Major League Baseball for throwing a 101 mph fastball near the head of Tampa Bay’s Mike Brosseau on Sept. 1, and Zack Britton is recovering from March 15 surgery to remove a bone chip from his pitching elbow.

MOVING ACROSS THE DIAMOND

Marcus Semien, making his Blue Jays’ debut, made a diving stop in his first game at second base since Sept. 26, 2014, and threw out LeMahieu for the final out of the fifth with two on.