Blue Jays expect to play in Florida, Buffalo and Toronto 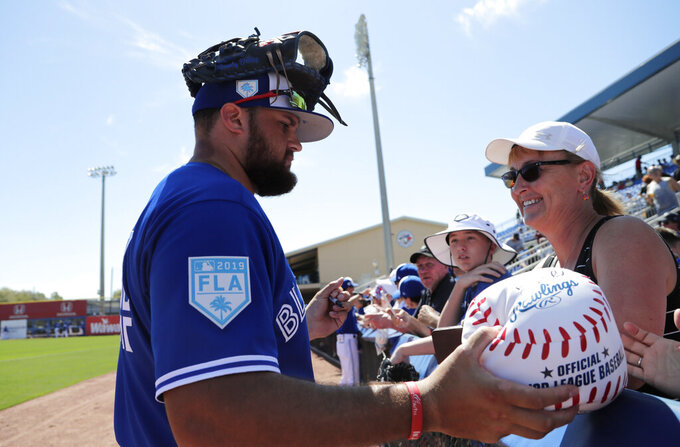 FILE - Toronto Blue Jays' Rowdy Tellez signs autographs for fans before a spring training baseball game against the Philadelphia Phillies in Dunedin, Fla., in this Thursday, Feb. 28, 2019, file photo. The Toronto Blue Jays will play their first two homestands of the season at their spring training facility in Dunedin, Florida, because of Canadian government restrictions during the pandemic. The team said Thursday, Feb. 18, 2021, it has been planning different scenarios for home games and had hoped to see improvements in public health. The Blue Jays cited the “ongoing Canada-U.S. border closure” in making the “difficult decision." (AP Photo/Lynne Sladky, File)

TORONTO (AP) — The Blue Jays expect to split the home portion of this year's regular-schedule among their spring training complex in Dunedin, Florida, their Triple-A ballpark in Buffalo, New York, and the Rogers Center in Toronto.

Toronto announced Thursday it will play the first two homestands of the season in Dunedin because of Canadian government restrictions during the pandemic.

Team president Mark Shapiro said a return to Buffalo is a likely option in June because of the heat and humidity in Florida. He hopes for games in Toronto at some point during the summer.

“The alternatives for our season lie with some combination of Dunedin, Buffalo and Toronto," Shapiro said.

The Blue Jays played home games during the shortened 2020 season in Buffalo and were 17-9 at Sahlen Field, home of their Buffalo Bisons Triple-A farm team. The Canadian government didn’t allow the team to play at home because of the risk of spreading COVID-19, citing frequent travel required in the U.S. during a baseball season

Shapiro said he didn't ask the Canadian government to start the season in Toronto because public health has not yet improved sufficiently and the border remains closed to non essential travel.

After starting the season with three-game series at the New York Yankees and Texas Rangers, Toronto’s schedule has a homestand with four games against the Los Angeles Angels from April 8-11 and the Yankees from April 12-14.

The Blue Jays follow with a trip to Kansas City, Boston and Tampa Bay, then have home games against Washington on April 27-28 and Atlanta from April 30 to May 2. That is followed by a 10-game trip to Oakland, Houston and Atlanta.

It remains unlikely they would gain approval to play May games in Toronto. A return home in the second half may be more realistic, after players and large segments of the population in the U.S. and Canada are vaccinated.

"That's where we want to be," Shapiro said. "That’s just not a realistic possibility right now with the circumstances being what they are and with the border being closed,”

Shapiro said Buffalo might not have to be used as an option if the Blue Jays are allowed to play in Toronto sooner expected. He said the Triple-A affiliate team in Buffalo would shift games elsewhere if the major league team plays in Buffalo, and the Blue Jays would need to build a permanent weight room if fans are allowed to attend games in Buffalo. A temporary weight room last season was located on Sahlen Field's concourse.

The border remains closed to nonessential travelers who are not Canadian citizens. Canada requires those entering the country to isolate for 14 days. And starting Monday, air travelers who arrive in Canada will be forced to quarantine in a hotel for up to three nights as they await the result of a coronavirus test.

Ongoing challenges with the pandemic and how that affects the process of crossing the border between the U.S. and Canada will also keep the Toronto Raptors in their adopted Tampa, Florida, home for the remainder of the regular season, the NBA team said last week.

Blue Jays ace Hyun-Jin Ryu signed with the team before the 2020 season and has yet to pitch a game in Toronto.

“Last season we had a new park and adjustments that we had to make,” Ryu said through a translator in Dunedin. "All these struggles we need to overcome."

“It plays a little smaller,” he said. “We're going to have to deal with it.”

Jansen said the team is spoiled to have a newly renovated complex in Florida.

"It's obviously nicer weather here than it is in Buffalo," he said.

Blue Jays manager Charlie Montoyo is happy to know where home games will be after not knowing last year until just before the season’s start.

“That was kind of tough on everyone,” Montoyo said.

The Blue Jays went went 32-28 last season, finishing third in the AL East behind Tampa Bay and the Yankees and qualifying for the expanded 16-team postseason. The Blue Jays were swept in two games by the AL champion Rays in a first-round series.