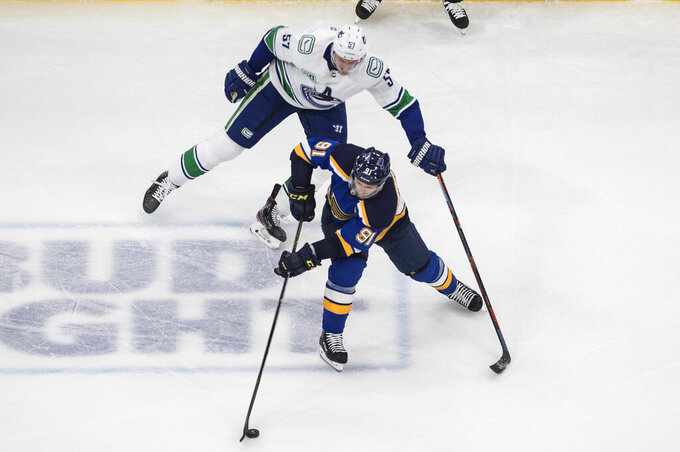 St. Louis Blues winger Vladimir Tarasenko is in jeopardy of missing the start of next season because he is facing shoulder surgery for the third time in less than three years.

General manager Doug Armstrong said Wednesday the 28-year-old Russian is scheduled to have another operation on his left shoulder and won't be re-evaluated until five months after surgery. Tarasenko missed the vast majority of this season after having the dislocated shoulder operated on in October, and his absence after aggravating the injury contributed to the defending Stanley Cup champions being knocked out in the first round of the playoffs.

There are still questions about when the 2020-21 season will begin, though the league has tentatively scheduled training camps to open Nov. 17 with opening night Dec. 1. Even if that gets pushed back, Tarasenko could miss a significant chunk of games.

“It’s a concern in the sense that he’s had three surgeries or is going to have three surgeries,” Armstrong said. “We’re hoping that he gets back to the level that he was at before. I’m not concerned about the work ethic and the approach he’s going to take to put himself in a great spot. But time is going to tell on how quickly and the impact he can have when he gets back.”

Tarasenko was among the Blues' leading scorers with 11 goals and six assists during their 2019 Cup run. St. Louis still finished first in the Western Conference during the shortened 2019-20 season despite him playing just 10 games.

He attempted to play in the NHL's restart but didn't look right, putting up no points and 10 shots. The Blues sent Tarasenko home from the Edmonton bubble to St. Louis to see team doctors, and the result of that evaluation wasn't positive.

“He was very obviously limited,” Armstrong said. “He rehabbed, he came back, we had to do another MRI. He wasn’t feeling good. That surgery didn’t take the way that we had hoped. It wasn’t successful.”

Tarasenko previously had his left shoulder operated on in April 2018 . There's now concern about whether the five-time 30-goal scorer will ever be the same.

“It’s certainly not a positive,” Armstrong said. “It’s his third surgery. We just know that he prepares and trains hard and needs to get back and play well for us.”

The Blues won't try to replace Tarasenko during the offseason, largely because they don't have the salary-cap space to do so. The cap ceiling will remain flat at $81.5 million because of revenue losses incurred leaguewide during the pandemic. St. Louis already would have to shed salary to re-sign pending free agent captain and top defenseman Alex Pietrangelo.

Beyond Pietrangelo, the rest of the core is signed for next season. Armstrong now hopes a young player like Jordan Kyrou can fill the void until Tarasenko returns.

“He has to take that opportunity and run with it,” he said.

Armstrong also revealed Wednesday that roughly 20% of the Blues' regular players contracted COVID-19. He believes that contributed to their losing seven of nine games when hockey returned.

“It affected each of the players differently,” Armstrong said. “Some lost a considerable amount of weight. They all felt some form of a symptom. It wasn’t that they had it and they didn’t feel anything.”