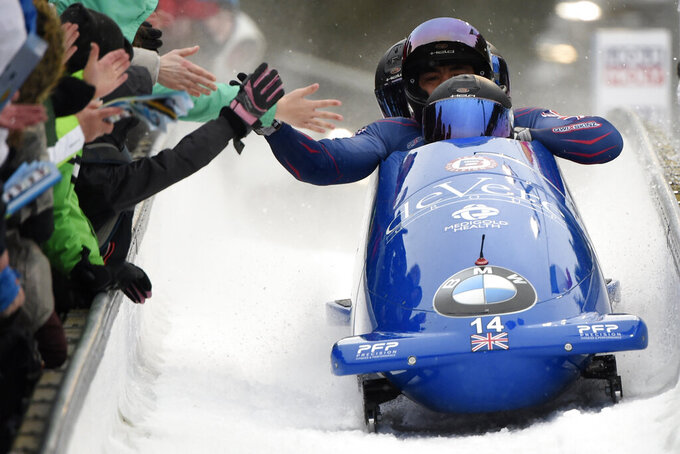 This season’s bobsled and skeleton world championships were awarded Tuesday to Altenberg, Germany, and moved out of Lake Placid, New York, because of concerns across many winter sports about the coronavirus pandemic and potential travel complications for those coming to North America.

The International Bobsled and Skeleton Federation said it made the move “to protect the health of athletes and spectators across the globe.” Lake Placid will be awarded the 2025 world championships instead.

“The decision wasn’t easy, as you can imagine,” said Heike Groesswang, the IBSF’s secretary general.

The IBSF also reworked the World Cup schedule for the coming season on Tuesday, and the other U.S. race planned for this winter — in Park City, Utah — is no longer going to happen. Double races will be held in Sigulda, Latvia, and Igls, Austria, with two events in Germany, another in Switzerland and the last scheduled for China in March.

“I think in a perfect world we want to be competing against the world’s best in front of a home crowd,” USA Bobsled and Skeleton CEO Aron McGuire told The Associated Press. “And so, it’s disappointing to not be able to compete on home ice this year, but we certainly understand, and we want to make sure that the athletes are in the safest environment as they can be.”

Concerns with going forward with the event in Lake Placid as planned included the possibility that athletes from some nations would be unwilling or unable to come to the U.S. during the pandemic; an uncertainty about whether Mount Van Hoevenberg — the site of Lake Placid’s sliding track — would be able to have fans present; and the lack of clarity about whether a lengthy quarantine period would be required for those coming into the area for the championships.

Most of the athletes in the world championships would be coming from Europe.

“Our strategy was to have less time spent in quarantine,” Groesswang said.

Giving Lake Placid the 2025 world championships keeps the same timeline as would have been in place this year, with the Adirondack Mountain village playing host to worlds in the season immediately before an Olympics.

“I was super excited for a home world champs ... but I’d be super happy and all on board for taking it back to Altenberg as well,” Humphries said.

Both world championship events in sliding for this winter have now been moved from North America. Luge’s world championships, which were scheduled for this coming February in Whistler, Canada, will now be held in Konigssee, Germany — also primarily because of concerns about quarantines for foreign athletes. Konigssee was announced as the new site Tuesday when a revamped World Cup luge schedule was revealed, a list that includes a possible World Cup in Lake Placid in January.

Luge condensed its schedule considerably, now planning two races at Igls, including the annual season opener; two in Konigssee including worlds; and possibly two in Oberhof, Germany. It's highly unusual for tracks to host two races in the same season.

For now, Lake Placid remains only as a World Cup candidate for luge this season. Luge officials said a race weekend set for Jan. 16-17 would take place in either Oberhof or Lake Placid. But it seems unlikely that Lake Placid will be a host, given how there's racing the weekend before in Latvia and the weekend after in Austria.

Sliding, skiing and skating have all now been forced to largely abandon plans for World Cups in North America this season — an important season in the Olympic cycle, with the Beijing Winter Games set to happen in February 2022.

Alpine skiing redid its schedule earlier this summer to remove all its planned North American stops this season, including races in Killington, Vermont, and Beaver Creek, Colorado, as well as others in Alberta.

Speed skating also canceled four planned North American races for its coming season — one in Salt Lake City and three in the Canadian cities of Calgary, Laval and Montreal.