The body clock of France thrown off-kilter by autumn tennis 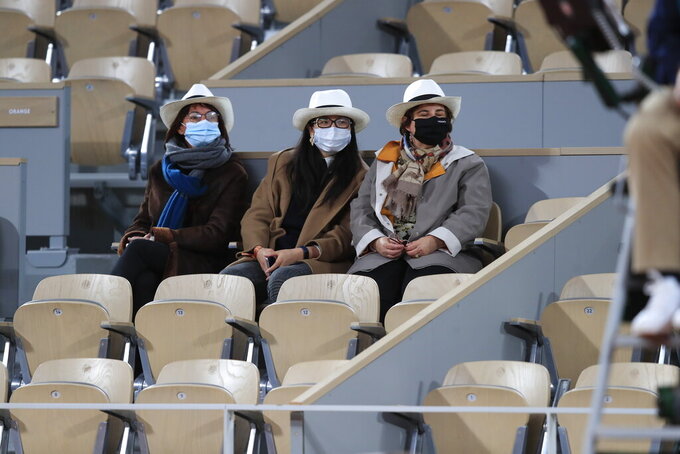 Three spectators watch a fourth round match of the French Open tennis tournament at the Roland Garros stadium in Paris, France, Monday, Oct. 5, 2020. There will still be small crowds at Roland Garros for the final week of French Open, after the Paris police chief decided Monday not to further reduce the limit of 1,000 spectators per day, as part of new measures to slow coronavirus infections in the French capital. (AP Photo/Michel Euler)

PARIS (AP) — Practically alone with a buffet of tennis to gorge on at the pandemic-skewered French Open like no other, Christophe Bailly glanced at his watch and reluctantly realized that not only was it past bedtime for his 9-year-old but that the reception from his wife would be frosty if he didn't get their son home ... Darn! It's already past 9?

Problem was, Theodore was nowhere to be seen, having vanished again with his giant Day-Glo souvenir tennis ball, for one last appreciative gaze from the stands so empty that the kid was able to get close enough to actually see the ochre brick-dust being kicked up by the players' thumping shots and hear their every mutter and cry of “Come on!”

“He’s hooked, like me," said Bailly, a 54-year-old computer consultant who also was taken as a lad by his dad to his first French Open and was now passing on that flame at what he guessed was his 50th and, without a doubt, most memorable visit to Roland Garros, the temple of clay-court tennis on Paris' western fringe.

From the fallen shiny horse chestnuts littering the sidewalks that lead to the French Open's home since 1928, to the porcini mushrooms as fat as fists on sale at market stalls across from where the players train, most everything has been thrown off-kilter by the virus-caused shift to autumn. The tournament is usually the second Grand Slam of the year, not the last, traditionally played in May-June and not in the cold and damp of September-October.

Normally, underfoot as they queue in late spring, crowds would be treading on the nose-tickling, cotton-like fallen pollen of plane trees that are now preparing to shed their leaves, trailing in that autumnal race behind the already golden chestnut trees that have VIP views of the courts. And the 30-acre site would be wall-to-wall people, not the ghost town of a mere 1,000 masked and gelled spectators allowed each day this year, mostly chosen by lottery.

The market vendors would be selling the first summer berries, not the last. Students would have one eye or — don't tell teacher — both on the tennis as they crammed for baccalauréat high-school final exams. Instead, they are wondering who is beating who at the tennis while they're stuck in class with face masks in a new academic year.

And workers who'd be reserving their summer getaways when the boss wasn't looking, reminded by the French Open that the nation's long and lazy annual July-August switch-off was just around the corner, are instead mourning the fading of their tans.

In short, the country's whole body clock has had to adjust to the postponement not only of the tennis but also of the Tour de France. The three-week cycling race, launched in 1903 before the tennis tournament opened to foreign players in 1925, got bumped by the pandemic from July to September, by which time the work-not-play grind of “Métro, boulot, dodo” — subway, work, sleep — conspired with the virus and social distancing to thin out the roadside throngs.

And for the players, well, how much time have you got? Suffice to say that some have adapted better than others to the thermometer stuck in the teens Celsius-wise (50 to 60 Fahrenheit), the rains that have pulled them on and off courts rendered clammy and the swirling winds that throw off their finely-tuned shotmaking and serves.

Florida-based Victoria Azarenka set the tone among the grumblers in the very first hour of play, retorting “What’s the point? Sitting here like ducks” when a match supervisor asked that she wait on court for a downpour to pass. Azarenka was gone in round two.

And among the few that took to the conditions like ducks to water — “Ten, 15 degrees, I love it,” Dominic Thiem said after his first match — even Thiem, from mountainous Austria, was taken aback when he woke at 7 a.m. for a match and discovered that dawn had yet break, as it would have done by then in May.

"Everything dark," said the U.S. Open champion who plays Diego Schwartzman from Argentina in the quarterfinals. “It shows how special and how unusual everything is in this year and in general."

For Bailly, as he reflected on his memorable day with Theodore, among the reasons this French Open “will, for me, remain exceptional among the 50 I have been to” is because they were among the lucky few who experienced it.

On Court Philippe Chatrier, with its new retractable, $55 million (50 million euros) roof that has already proved to be a sound investment, the ushers shepherded them to the vacant court-side seats so Rafael Nadal wouldn't feel quite so alone.

“We were very, very close. It was phenomenal," Bailly said.

And after dark fell, they couldn't drag themselves away from the outside courts given night lights this year so matches can continue after the autumnal early setting of the sun.

“Usually there are so many people that it’s like walls of humanity and you see nothing. And now, suddenly, everything is visible and accessible,” he said. "I don’t want to go home. But the kid has school tomorrow.”

“We’re probably going to get told off by my wife,” he added, "but that’s the way it is.”