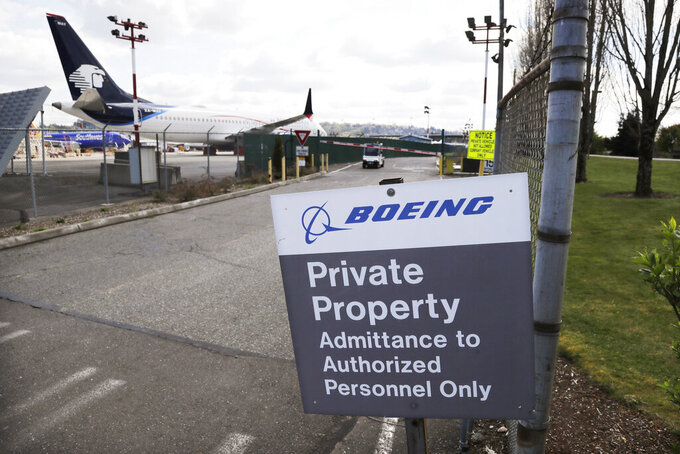 FILE - In this April 20, 2020, file photo, planes sit parked behind a sign marking Boeing property at a Boeing production plant in Renton, Wash. Boeing shareholders approved a slate of 12 company-backed nominees for the board on Monday, April 27, despite recommendations from two proxy advisers against five directors, including the chairman, for what the advisers called poor oversight of the company's handling of the 737 Max crisis. (AP Photo/Elaine Thompson, File)

Boeing's CEO said Monday that it will take years for the aircraft-building business to return to levels seen before the coronavirus pandemic, which has slowed air travel to a trickle and led airlines to park 2,800 jets.

“We are in an unpredictable and fast-changing environment, and it is difficult to estimate when the situation will stabilize,” David Calhoun told shareholders, “but when it does, the commercial market will be smaller and our customers’ needs will be different.”

Boeing was in crisis before the pandemic. The grounding of its best-selling jet, the 737 Max, after two crashes that killed 346 people sent the company spinning last year to its first money-losing year in two decades and battered its reputation.

The virus outbreak has added to Boeing's troubles by causing airlines to delay or cancel plans to buy new jets. The virus also caused Boeing to shut down assembly plants for several weeks, although it recently reopened in the Seattle area and announced Monday that it will resume production in a South Carolina plant in less than a week.

Boeing is expected to apply for a share of $17 billion in low-interest loans that Congress and the Trump administration set aside for defense companies.

“We know we are going to have to borrow more money in the next six months in order to get through this really difficult moment” and help suppliers, Calhoun said without detailing where or how much Boeing will borrow.

The Chicago-based company will report first-quarter results on Wednesday, and analysts surveyed by FactSet expect a loss of more than $500 million, or $1.57 per share.

Because of the pandemic, the shareholder meeting was held online. Shareholders approved a slate of 12 company-backed nominees for the board despite recommendations from two proxy advisers against five directors, including the chairman, for what the advisers called poor oversight of the company’s handling of the 737 Max crisis.

Glass Lewis told shareholders to reject Chairman Lawrence Kellner, and Institutional Shareholders Service targeted four other longtime directors and told investors to support Calhoun “with caution.” All of them served on the board during development of the Max.

Kellner received 74% of shares voted, not counting abstentions, according to Boeing. The four highlighted by ISS — Susan Schwab, Arthur Collins Jr., Edmund Giambastiani Jr. and Ronald Williams — received 57% to 67%, while all others were 95% and above.

Shareholders narrowly approved a measure calling for an independent chairman. Kellner is an outsider, but Dennis Muilenburg held both CEO and chairman titles until he was fired in December.

Boeing shares have dropped 60% this year.