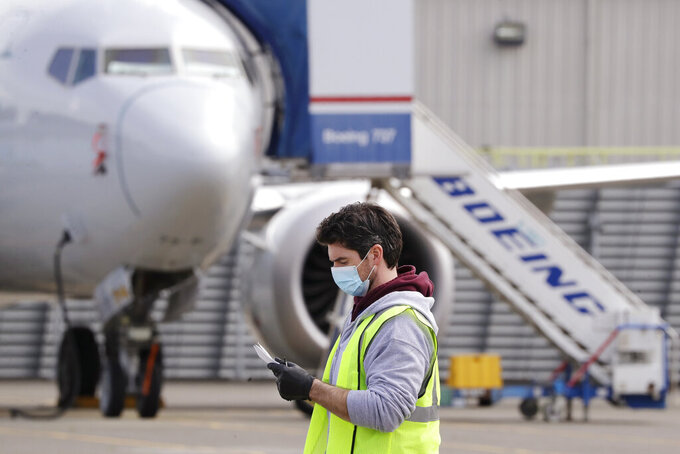 A worker walks past a Boeing 737 MAX jet at a Boeing airplane manufacturing plant Wednesday, April 29, 2020, in Renton, Wash. Boeing says it will cut about 10% of its workforce and slow production of planes as it deals with the ongoing grounding of its best-selling plane and the coronavirus pandemic. With air travel falling sharply because of the virus, airlines have delayed orders and deliveries of new planes, reducing Boeing's revenue. (AP Photo/Elaine Thompson)

SEATTLE (AP) — In normal times, news that Boeing is cutting 10 percent of its workforce would be dire in the Seattle area, a region synonymous with aerospace decades before Microsoft and Amazon moved in.

It’s even more difficult to fathom amid the economic devastation caused by the coronavirus pandemic.

“There are so many unknowns right now that it's hard to find a foothold to know where we're jumping off from,” said Anneliese Vance-Sherman, a regional labor economist with Washington state's Employment Security Department. “This is unfolding more quickly than our data.”

When the pandemic gutted air travel, Boeing was already reeling from the grounding of its best-selling jet, the 737 Max, after two crashes. The company said Wednesday that it would cut 10% of its workforce and slow the production of new planes to help survive the downturn.

The cuts will fall most heavily on its commercial jets division, which has plants in Washington and South Carolina. The assembly lines were temporarily closed after some workers became ill with COVID-19, but they are resuming operations under new social distancing rules. Boeing hasn't said how many jobs will be cut in the Seattle region; it employs 36,000 in the city of Everett and around 10,000 in Renton as part of a statewide workforce of more than 70,000.

The aerospace industry has always been cyclical, with job numbers in Washington state fluctuating sometimes by tens of thousands. The industry no longer dominates Seattle the way it used to, but it's still a huge force in the region: Everett is home to Boeing's plant, and one in every five jobs in the surrounding county is in manufacturing, many of them in aerospace.

Layoff notices already have been coming in from many Boeing suppliers and other aerospace companies.

“Our aerospace sector, like nearly every other sector in Everett, has taken a substantial hit,” Mayor Cassie Franklin said in a statement. “We’re a Boeing town, and when Boeing hurts, we all hurt.”

The company is hoping most of the job cuts will be done voluntarily. It is offering one week of severance for each year of service, up to 26 weeks. The engineering union at Boeing has urged its members to consider the offer.

State House Majority Leader Pat Sullivan, a Democrat, called Boeing's cuts “scary” but said he hoped they would largely be accomplished through voluntary layoffs. It's too soon to say what help the state might need to provide, he added.

Democratic Sen. Marko Liias, whose district is in the region, said the focus needs to be on supporting and training unemployed aerospace workers but he was confident the industry would bounce back.

“The bad news we had last year about the 737 Max was devastating, and the impact of the pandemic on global aviation is a second huge body blow to the industry," Liias said. "That basic instinct to explore the world is not going to go away. We are a center of aerospace, and we will come back from this.”