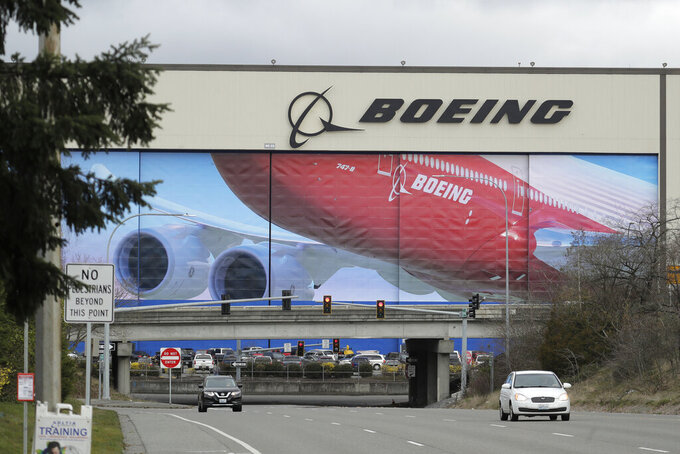 FILE - In this March 23, 2020, file photo, cars are driven near Boeing's manufacturing facility in Everett, Wash., north of Seattle. Boeing says it will resume production of its commercial airplanes in phases at its Seattle area facilities next week after suspending operations in March because of the COVID-19 pandemic. The company says 27,000 of its employees will return to work under new measures put in place to keep people safe and fight the spread of the virus. Employees for the 737, 747, 767 and 777 airplanes will return as early as Monday, April 20, with most returning to work by Tuesday, officials said. (AP Photo/Ted S. Warren, File)

SEATTLE (AP) — Boeing said Thursday it will restart production of its commercial airplanes next week in the Seattle area, putting about 27,000 people back to work after operations were suspended because of the COVID-19 pandemic.

Boeing, which is Washington state's largest private employer, said it has taken extra precautions and instituted comprehensive procedures at all of its sites to fight the spread of COVID-19. The aerospace giant said its new virus-slowing measures will include the use of face masks and other protective equipment, hand-washing sites and employee wellness checks, among others.

“This phased approach ensures we have a reliable supply base, our personal protective equipment is readily available and we have all of the necessary safety measures in place to resume essential work for our customers,” Stan Deal, president and CEO of Boeing Commercial Airplanes and senior executive in the Pacific Northwest, said in a news release.

Boeing’s shutdown went into effect March 25 after workers tested positive for the virus and a longtime inspector for the company died.

Boeing operates two commercial aviation production facilities in the Seattle area, one in Everett and another in Renton. Its Everett facility, north of Seattle, produces airplanes including 777s, 787s, 767s and 747s– along with the KC-46A military refueling and transport plane. Its plant in Renton, south of Seattle, produces the 737 line and military P-8s.

The coronavirus has exacerbated Boeing’s crisis surrounding the 737 Max, which remains grounded after two deadly crashes. The MAX assembly lines have been halted since January pending FAA clearance of Boeing’s proposed fixes for the flight control system implicated in the crashes, The Seattle Times reported.