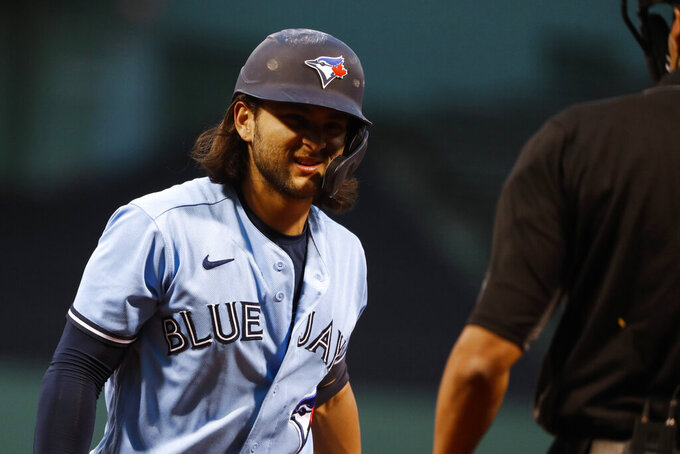 Toronto Blue Jays' Bo Bichette looks back at the umpire after being called out on strikes during the first inning of a baseball game Tuesday, April 20, 2021, at Fenway Park in Boston. (AP Photo/Winslow Townson)

BOSTON (AP) — Xander Bogaerts hit a three-run home run to back Eduardo Rodriguez in his first start at Fenway Park since 2019, and the Boston Red Sox beat the Toronto Blue Jays 4-2 on Tuesday night.

Rodriguez (3-0), who missed last season due to COVID-19 complications, allowed two runs on three hits over six innings and struck out six for AL East-leading Boston.

Matt Andriese, Adam Ottavino and Matt Barnes each worked a scoreless inning in relief. Barnes earned his third save.

“I was really excited as soon as I went out there," Rodriguez said. "It feels amazing to be back here to step on the mound and be able to compete. ... That was something special for me.”

Rodriguez was pulled after allowing his second homer of the day, a towering leadoff shot by Randal Grichuk leading off the seventh. Bo Bichette also homered for the Blue Jays, who have lost three straight.

Manager Alex Cora said he likes the way has Rodriguez attacked the strike zone and set up the bullpen this season.

“His stuff is that good. He’s evolving into one of the best lefties in the league," Cora said. “He has a good feel of what he wants to do.”

Trailing 4-2 in the eighth, the Blue Jays had a runner on third with two outs, but Bichette struck out.

Toronto had four hits, the first time it has had four or fewer hits in back-to-back games since July 2019.

“We all know they can do better. They’re just not doing it right now,” Blue Jays manager Charlie Montoyo said. “Hitting’s contagious and when you don’t hit, everybody feels the pressure.”

Rodriguez received a warm greeting from the pandemic-limited Fenway crowd of 4,728. It was a small consolation prize for the left-hander, who missed out on scheduled opening day starts each of the past two seasons.

He still appeared to feed off the home fans' energy, hurling a 95 mph fastball to strike out Bichette looking in the first inning.

Rodriguez cruised through his first three innings, allowing only a walk.

In the fourth, Bichette jumped on a first-pitch cutter and drove it over the Green Monster to put the Blue Jays in front 1-0.

Christian Arroyo and J.D. Martinez singled ahead of Bogaerts' blast to left-center in the bottom of the inning. Marwin Gonzalez doubled later in the fourth and Bobby Dalbec drove him in with a triple.

Red Sox: Left-hander Chris Sale will report to the team’s spring training facility in Fort Myers, Florida, on Sunday to continue his rehabilitation following Tommy John surgery in March of 2020. “It’s just a matter of time of when he gets on the mound. We’ll go from there,” Cora said.

Cora was delayed getting to the ballpark, saying before the game that he had issues with his COVID-19 test results.

“Some testing didn’t go the way it should have gone,” Cora said, adding that he was tested multiple times.

Cora is scheduled to receive his second dose of COVID-19 vaccine on Wednesday.

Red Sox: Right-hander Garrett Richards (0-1, 6.00) will make his fourth start of the season. He has posted a 1.80 ERA and .179 opponent batting average in his past two starts.