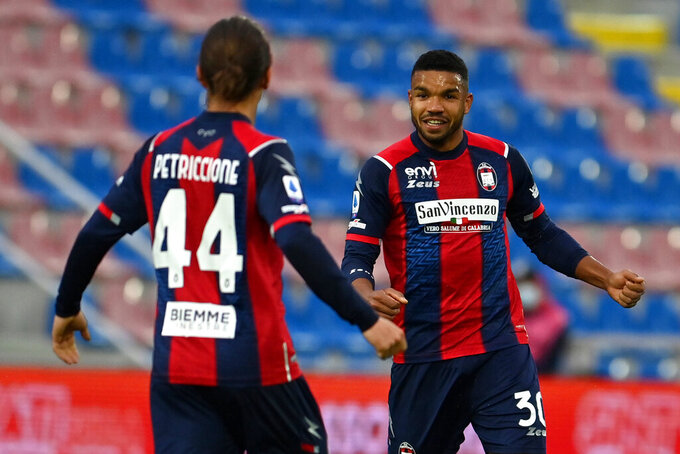 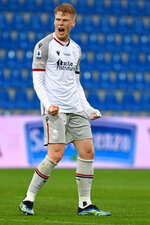 MILAN (AP) — Bottom club Crotone let slip a two-goal lead to lose 3-2 at home to Bologna in Serie A on Saturday.

Substitute Andreas Skov Olsen scored the winner for Bologna six minutes from time. Crotone had looked set for a precious win after goals from Junior Messias and Nwankwo Simy put it 2-0 up at halftime. But midtable Bologna leveled with two goals in eight second-half minutes.

Cagliari almost fought back from two goals down but had a late goal ruled out for offside in a 2-1 defeat at fellow struggler Spezia. The match between Serie A leader Inter Milan and Sassuolo was postponed because of coronavirus cases in the Nerazzurri camp.

Crotone took the lead in the 32nd minute as Messias’ free kick went past everyone and into the bottom corner.

Simy doubled Crotone’s lead eight minutes later when he drilled a penalty into the bottom right corner after Bologna defender Adama Soumaoro had bundled over Samuel Di Carmine as they tussled for a corner kick.

Bologna coach Siniša Mihajlović rang the changes at halftime, bringing on Skov Olsen and Jerdy Schouten, and the visitors upped the pressure.

Soumaoro made up for giving away the penalty by reducing the deficit in the 62nd and Schouten curled a long-range strike into the top right corner shortly after for the equalizer.

Bologna completed the extraordinary comeback late on when Alex Cordaz could only parry Rodrigo Palacio's strike and Skov Olsen slid in to slot home the rebound.

Emmanuel Rivière thought he had scored a stoppage-time equalizer for Crotone but it wad ruled out for offside.

Spezia earned a potentially crucial win against Cagliari in a direct fight to avoid relegation.

Giovanni Simeone should have leveled but he ballooned his shot over an empty goal from close range and Giulio Maggiore appeared to have won the match when he scored a chaotic second for Spezia 10 minutes from time.

Gastón Pereiro pulled one back for Cagliari three minutes later and the visitors thought they had snatched a valuable point in stoppage time but João Pedro's goal was ruled out for offside.