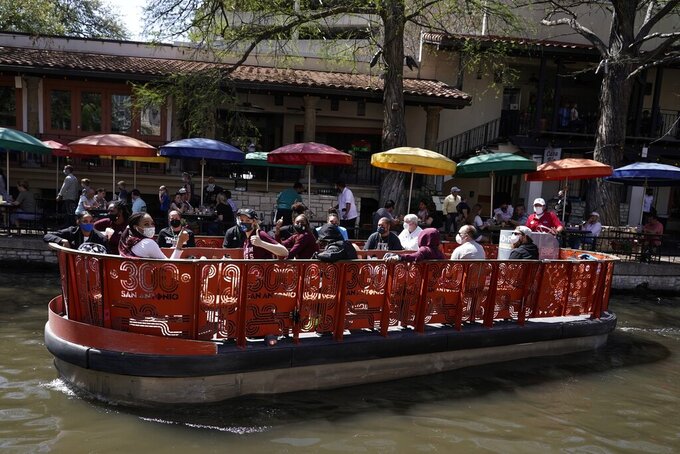 Members of the Women's Texas A&M basketball team take a riverboat tour Friday, March 26, 2021, in San Antonio. Boat rides, TikTok videos and Uno. Lots and lots of Uno, in fast-paced games where the cards fly in a frenzy. The men's and women's NCAA tournaments in Indianapolis and San Antonio aren't all COVID-19 tests, basketball and contact tracing. But being in quasi-isolation with any movement inside and outside their hotels restricted, teams had to get creative during the days and weeks between games and nasal swabs to find ways to stay entertained. - (AP Photo/Morry Gash) 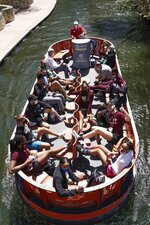 SAN ANTONIO (AP) — Wiffle ball games and ping-pong tournaments. Boat rides, TikTok videos and Uno. Lots and lots of Uno, in fast-paced games in which the cards fly in a frenzy.

The men's and women's NCAA Tournaments in Indianapolis and San Antonio aren't all COVID-19 tests, basketball and contact tracing. But being in quasi-isolation with any movement inside and outside hotels restricted, teams had to get creative during the days and weeks between games and nasal swabs to find ways to stay entertained.

“Coach Moore was knocked out multiple times, back-to-back-to-back .... And there’s been lots and lots of Uno,” forward Elisa Cunane said before the Wolfpack were eliminated in the Sweet 16.

The Stanford women had no trouble filling the gaps. They're seasoned pros after being forced to spend nearly 10 weeks away from home during the regular season because local government restrictions in Santa Clara County, California, prevented them from practicing or playing at home.

While Stanford won four games to advance to the Final Four, they were also staging sweat-inducing ping-pong tournaments. And true to form for the NCAA postseason, a few on the overall top seed in the women's tournament complained about their draw in the field.

“I got a bad draw in the ping-pong tournament,” said Cardinal coach Tara VanDerveer, who wasn't quick enough with her backhand and got knocked out pretty quick. “But I've learned once the bracket's set, you're in the bracket."

Stanford's Hannah Jump apparently is a whiz on the small court when she's not dropping 3-pointers.

“Her hands, she has really big hands,” Cardinal guard Anna Wilson said. “I think the way she handles the paddles is the reason why she’s so good. She has a great backhand and forehand.”

The women's tournament also had a digital portal where athletes could sign up for yoga or meditation sessions or just pose questions about life inside the tournament.

Cards also were big with Baylor men with serious games in the Bears hotel in Indianapolis, guard Adam Flagler said as the the No. 1 seed Bears advanced to the Final Four.

"We had a Uno tournament. We had a Connect Four tournament," Flagler said, although he didn't know who won, just that it wasn't him.

“When I lose, I can’t even focus any more," "Flagler said.

The Houston Cougars have found solace in what coach Kelvin Sampson called the team's “RV campground.""

Sampson said the Cougars have been away from home since going to their conference tournament on March 11, flying straight from Fort Worth, Texas, to Indianapolis to receive their first round of coronavirus testing.

“You know everybody comes out of their rooms at feeding time,” said Sampson, who has guided the Cougars men to the Final Foul for the first time since 1984. “We all congregate by the elevators, or the microwave, or refrigerator for late night snacks. Guys are popping popcorn, ordering a pizza. Guys walk out with their little sleeping beanies on.

“It's like, you know, everybody’s standard weekend over at uncle Joe’s house. But that’s brought us closer together. That’s sort of you know, the bubbles."

In San Antonio, where the weather has been mostly sunny with temperatures in the low 70s, teams seemed to have a little more freedom to move by the time the field had shrunk from 64 teams to 16.

Of the 64-team field, 27 took boat tours along the city's famed River Walk, and six took private tours of the iconic Alamo, which is nestled in the heart of downtown. And starting Wednesday, the last four women's teams were allowed a private visit at the San Antonio zoo, where they could feed the giraffes.

But those outings still kept the teams isolated from others because any venture out of the hotel is bound to carry some risk, even if minimal.

Texas is a wide-open state after Republican Gov. Greg Abbott lifted the state's mask requirements on March 10. Businesses are allowed to operate at 100% capacity, although many still require patrons to wear masks.

Although Texas has had more than 47,000 reported COVID-19 deaths and nearly 2.4 million confirmed infections, the state this week has reported a six-month low in hospitalizations.

The women's tournament allowed only a limited number of fans connected to players and staff to watch the first two rounds. But by the Sweet 16, the NCAA was allowing up to 17% capacity at the Alamodome, which meant sizeable crowds to watch Baylor, Texas A&M and Texas, as well as to see Stanford's Kiana Williams, who is from San Antonio.

A crowd of several thousand on hand for No. 6 Texas' upset of No. 2 Maryland in the Hemisfair Region celebrated with chants of “Texas Fight!” after the game. Texas played much of the season in front of an empty arena in Austin because of fan restrictions.

“It's awesome to have fans in the stands. The atmosphere just makes it that much better," Texas guard Celeste Taylor.

The players say they've made the best of the restrictions. Still, some frustration has bubbled up.

UConn coach Geno Auriemma missed the top-seeded Huskies' first two games because he was in quarantine after testing positive for COVID-19 and questioned some of the protocols once he arrived in San Antonio.

He was notably mystified by rules limiting four members of a team in an elevator at a time, that he said caused long delays.

“It’s four of the same team that just spent the last 45 minutes upstairs together. It’s kind of bizarre, right?” he said.

Auriemma's team is still in San Antonio after advancing to its 13th consecutive Final Four. The Huskies have been playing a tournament of Texas-themed games, including trivia and relays, set up by associate head coach Chris Dailey to break the monotony. Though that pesky elevator wait still exists.