Bosnia doctors appeal for respect of rules amid virus surge 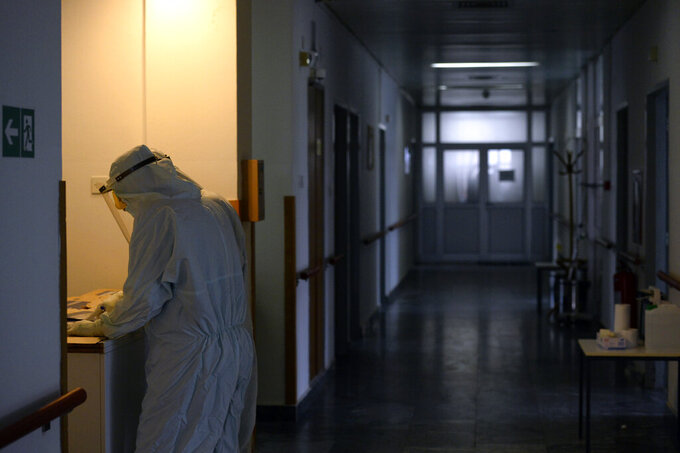 A medic wearing full protective gear works in the corridor in the COVID-19 ward at a former military hospital in the capital Sarajevo, Bosnia, Thursday, Nov. 19, 2020. Doctors in Bosnia, one of the hardest hit countries in the Balkans with the new coronavirus, are appealing on the citizens to respect preventive measures and help the ailing health system. (AP Photo/Kemal Softic)

SARAJEVO, Bosnia-Herzegovina (AP) — Doctors in Bosnia, one of the hardest-hit countries in the Balkans with the new coronavirus, are appealing to citizens to respect preventive measures to help the ailing health system.

As Bosnia battles a surge in infections and a mounting death toll, authorities have converted one third of all hospital wards to treat COVID-19 patients.

The impoverished country has one of the weakest health systems in Europe that was ravaged during the 1992-95 war and further plagued by mismanagement, lack of funds and corruption.

Authorities on Thursday reported more than 1,000 new infections in the nation of 3.5 million people while 64 people died in the past 24 hours.

“Our message to the citizens is to respect all recommended measures, including wearing face masks, keeping distance and avoiding bigger gatherings,” said Dr. Amir Cehajic, an internal medicine specialist at the Abdulah Nakas General Hospital in Sarajevo. “By bigger gatherings, I mean more than two (people.)”

On Thursday, Cehajic was making his round on the COVID-19 ward, where patients could be seen on oxygen support. As doctors checked the patients, nurses made the patients' beds. One patient could be heard apparently calling doctor Cehajic by his first name.

Cehajic said his hospital takes in patients with moderate cases of COVID-19 while those in life-threatening situations are sent to other facilities.

Still, the hospital is nearly full round-the-clock with around 90 patients and more coming in on a daily basis. Some patients are discharged to make way for new ones.

“We are functioning with huge effort, we are on the verge of our capacity, human and technical,” Dr. Bilala Oglecevac said Wednesday.