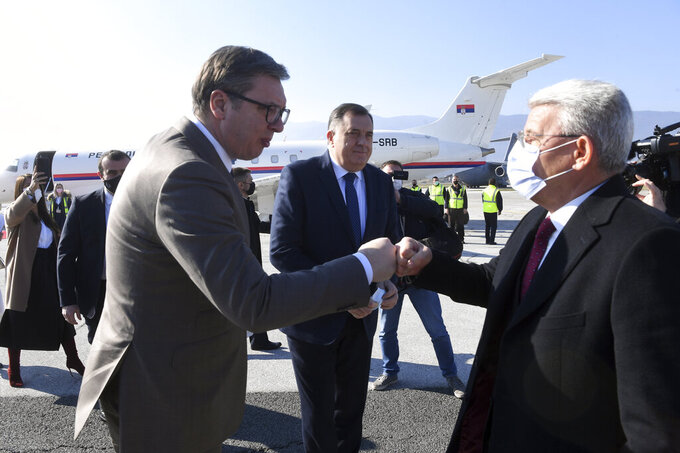 In this photo provided by the Serbian Presidential Press Service, Serbian President Aleksandar Vucic, left, and Muslim member of the tripartite Presidency of Bosnia Sefik Dzaferovic exchange fist bumps at Sarajevo Airport, Bosnia, Tuesday, March 2, 2021. Bosnia on Tuesday received 10,000 vaccines from neighboring Serbia amid a dispute with the international COVAX mechanism over a delay in planned shipments. Serbia's populist President Aleksandar Vucic flew to the Bosnian capital of Sarajevo to deliver the Astra-Zeneca vaccines to the authorities there. (Serbian Presidential Press Service via AP)

SARAJEVO, Bosnia-Herzegovina (AP) — Bosnia on Tuesday received 10,000 vaccines from neighboring Serbia amid a dispute with the international COVAX mechanism over a delay in planned shipments.

The Balkan nation has threatened to sue the program unless the vaccines arrive as agreed. It has asked for 1.2 million vaccines that would cover about one third of its population.

Bosnia will sign what it described as “additional” documentation requested by vaccine producers, a statement issued after the video conference said. It added that Bosnia has met the conditions for the arrival and storage of the jabs.

Serbia’s populist president, Aleksandar Vucic, flew to Bosnian capital Sarajevo to deliver the AstraZeneca vaccines to the authorities there. The delivery is enough for 5,000 people to receive both required doses.

Vucic described the move as an act of solidarity and urged closer cooperation among the Balkan countries.

Serbia has launched its vaccination program in January, mainly with China’s Sinopharm and to a lesser extent with Pfizer-BioNTech, Russia’s Sputnik V and as of recently AstraZeneca. Displaying a regional sway, Serbia has donated vaccines to neighboring nations that are still waiting for shipments.

“President Vucic made us an offer at the moment when international mechanisms failed and we accepted it,” said Sefik Dzaferovic, the Bosniak member of the multi-ethnic Bosnian presidency.

The Croat representative, Zeljko Komsic added that "if even one of these 5,000 vaccines saves a life, then it’s worth it.”

Relations with Serbia have remained a sensitive issue in Bosnia since the 1992-95 war when Belgrade backed a bid by Bosnia’s Serbs to form its own ministate and unite with Serbia.

The war erupted after the breakup of the former Yugoslav federation. It claimed the lives of more than 100,000 people before ending in a U.S.-brokered deal, which created a Serb and a Bosniak-Croat entity with a joint Bosnian government.

Vucic, a former extreme nationalist who supported the Bosnian Serb war effort during the conflict, said he has proposed a Serbia-Bosnia summit to be held in the coming months in Belgrade to widen economic and other cooperation.

“We can move forward much faster together,” he said. “We are stronger when we speak with one voice."

Both Bosnia and Serbia have been seeking European Union membership. Serbia and the Bosnian Serbs have also forged close relations with Russia and China.

The Bosnian Serb region has acquired Russian Sputnik V vaccines, and hundreds of medical staff from the Republika Srpska entity have crossed over to Serbia to receive vaccine shots.

The nationalist Bosnian Serb leadership has called for the separation of their entity from Bosnia while issues like border identification or property division are still burdening relations with Belgrade.

“We must start relaxing our relations at some point,” Dzaferovic said. “There has been enough tensions and futile disputes.”