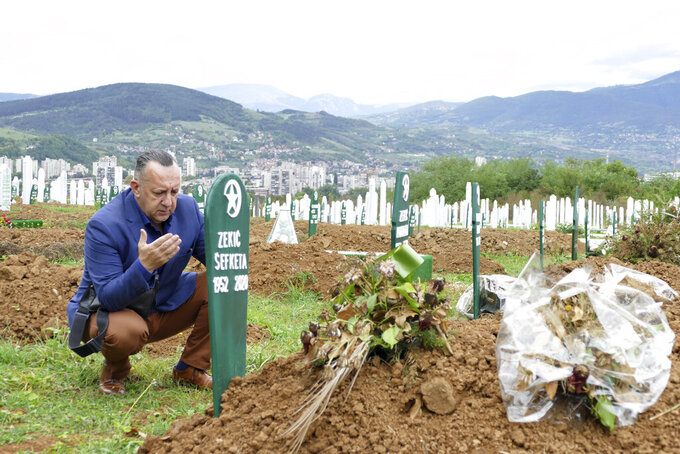 Tarik Svraka visits the graves of his parents in law, who died of COVID-19 related complications, in Zenica, Bosnia, Monday, Sept. 28, 2020. The coronavirus skeptics and rebels in Bosnia grow louder in step with the rising number of infections in the country. Recently, several families who lost their loved ones to COVID-19 were confronted online, and some even in real life, by scores of random virus believers and deniers sifting through their pain and questioning their relatives’ cause of death. (AP Photo/Almir Alic)

SARAJEVO, Bosnia-Herzegovina (AP) — Denis Zekic was on his daily video call with his parents in Bosnia in early August when his father said he might be coming down with a fever. Less than a month later, both of Zekic’s parents were dead, joining the people who would be counted as the coronavirus pandemic’s global toll climbed toward 1 million.

Zekic says his mother, Sefketa, and father, Muharem, both were comparatively healthy before they died at age 68. They were rule followers who practiced social distancing in the city of Zenica. Before his father was hospitalized, his mother wore gloves and a face mask while caring for him, but she ended up as a COVID-19 patient in the same intensive care wing, Zekic said.

“I saw her walk into the hospital on her own feet. From a distance. With protective masks covering our faces,” he said. “Honestly, I believed that she would pull through.”

Yet Zekic and his sister soon discovered that some neighbors and acquaintances had little sympathy for their sudden double loss, but plenty of opinions and, at times, cruel disdain. One time, a random man taunted the siblings at the grocery store, alleging that authorities had paid them to say the coronavirus killed their parents.

“How to respond to that?” Zekic said.

Bosnia’s coronavirus rebels have grown increasingly vocal, and hostile, in recent months as the number of confirmed virus cases rose in the small, impoverished Balkan nation of 3.5 million. Social media and the comment sections of news websites have become platforms for vicious arguments that occasionally have spilled over into invasive confrontations.

Several recent studies of coronavirus-related media content in Bosnia conducted by the independent organization Mediacentar Sarajevo concluded that pandemic-related comments on news sites are dominated by “offensive and disparaging” remarks.

“We are now paying the price for years of neglect of our education system, our political system, for our media illiteracy,” said Elvira Jukic Mujkic, editor-in-chief of its online magazine, Media.ba.

A conference in Bosnia sponsored by the European Union this week brought together fact-checkers, science journalists and experts from the Balkans and the EU, to discuss disinformation during the pandemic. One of the conclusions from the event stated: “The damage inflicted by fringe ‘scientists’ is pervasive and grave. The scientific community in the (Balkan) region does not currently feel empowered to respond to this.”

While other countries around the world also have outspoken contingents of coronavirus conspiracy theorists, the voices of the virus deniers have the potential to echo farther in Bosnia, which bears economic, political and social scars from the fratricidal ethnic war fought there during 1992-95.

The pandemic has amplified the country’s many problems, including an extreme shortage of doctors and nurses, and rampant public corruption. A number of prominent public and government officials are under investigation on suspicion of malfeasance in the procurement of desperately needed medical equipment.

“After years of declining trust in government and public institutions, public response to the perceived incompetence of our authorities in the early days of the coronavirus pandemic was to put in doubt everything they say,” psychologist Tanja Tankosic-Girt said.

The allegations further undermine the public trust on which government efforts to curb the spread of the infection in Bosnia depend. The country has a low number of confirmed virus cases compared with countries with a lot more people, but nearly 60% of its nearly 28,000 confirmed cases were reported since the end of July.

More people around the country nevertheless are bending or ignoring social distancing rules, gathering in uncomfortably close quarters and ditching face masks. At the same time, public discourse around the coronavirus, like around many other issues in the country, is growing increasingly divisive, Tankosic-Girt said.

“Black-and-white thinking is becoming so prevalent that we are reaching the point of a complete loss of empathy,” she said.

The death in early August of 37-year-old philanthropist Belma Soljanin, the director of a maternal and child health organization in the capital, Sarajevo, triggered days of heated online discussions that unraveled quite a few long friendships.

Just hours after news of Soljanin’s death broke, people were sifting through her mother’s personal Facebook account and sharing a post in which she alleged her daughter, who had been hospitalized in a COVID-19 isolation ward while in late pregnancy, died because of doctors’ negligence.

The post became fodder for virus deniers, who quickly took over the conversation.

“Coronavirus is a hoax. Even her mother says she wasn’t infected, but you just go on wearing your face masks and believing the lies they serve you,” one person wrote. “While you hide from the inexistent virus, they are ripping you off, remove face masks and be free.”

The head of the Institute of Emergency Medical Care in Sarajevo, Dr. Adem Zalihic, said he is certain that “virus deniers are contributing to the spread of the infection and the number of deaths” by convincing people they should not wear face masks and maintain social distance.

“The virus is among us. It infects and kills people, I do not understand how they can deny it despite all the evidence. How can they sleep at night?” Zalihic said.

Pulmonologist Besim Prnjavorac, the director of the COVID-19 hospital in the central city of Tesanj, said people tend to dismiss COVID-19 as “something that happens to others” or is “nonexistent” until it is too late.

“It is only when their loved ones get sick or even die that they realize the coronavirus is real and very, very dangerous,” Prnjavorac said.

Emira Telic, 38, who is currently recovering from a severe case of COVID-19 in the Tesanj hospital, has all the proof she needs to refute the deniers: the breaths she struggles to take.