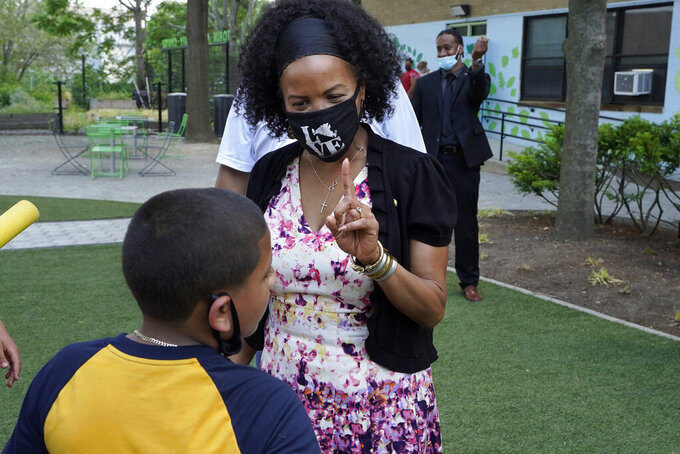 Acting Boston Mayor Kim Janey speaks with a young person while visiting the Tobin Community Center, Tuesday, June 8, 2021, in Boston. The chair of the Boston School Committee, Alexandra Oliver-Dávila, resigned amid criticism of racially charged texts she shared with another member of the committee disparaging families of students, city officials announced Tuesday, June 8. Janey said in a written statement Tuesday that the texts were "unfortunate and unfairly disparaged members of the Boston Public Schools community." (AP Photo/Steven Senne) 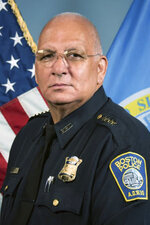 BOSTON (AP) — Boston’s leaders are scrambling to tamp down a series of political crises.

The acting mayor just fired the new police commissioner. Two school committee members abruptly quit after exchanging a series of racially charged text messages. The Boston Police Department is embroiled in an overtime fraud scandal. And on Beacon Hill, the governor is getting heat for hiring a veterans’ home administrator who had nearly 80 former military members die of COVID-19 under his watch.

All the drama is playing out against a potentially historic mayoral race that will likely see Boston elect its first person of color or woman to lead the city.

The challenges have landed on the desk of the city’s Black chief executive, acting Mayor Kim Janey, also the city’s first woman to occupy the office.

For Janey, the most recent development — the resignation of two Latina members of the Boston School Committee — has proven to be one of the more delicate problems she’s faced since assuming the office in March after former Mayor Marty Walsh stepped down to become President Biden's labor secretary.

The two resigned after texts obtained by The Boston Globe showed school committee Chair Alexandra Oliver-Davila and fellow committee member Lorna Rivera disparaging parents at a virtual hearing about a proposal to temporarily drop the entrance test requirement to the city’s exam schools.

“Wait until the white racists start yelling at us,” Rivera texted. “Whatever. They’re delusional,” texted Oliver-Davila. “I hate WR,” she texted Rivera again, a reference to the city’s West Roxbury neighborhood.

“Sick of Westie whites,” Rivera replied. “Me too. I really feel like saying that,” Oliver-Davila texted.

In her resignation letter, Oliver-Davila said she regretted the texts, but also said she was “not ashamed of the feelings from history that made me write those words,” referencing a personal history growing up in a city where she said was ostracized, teased, and called racial slurs.

The texts put Janey in an awkward spot, having also experienced racist attacks growing up in Boston.

In a written statement, Janey said the texts were “unfortunate and unfairly disparaged members of the Boston Public Schools community.”

But she was quick to praise the two as “passionate advocates for Boston families" and said she could empathize with their personal stories.

“As a Black woman, I know that racism hurts. The rocks and racial slurs thrown at me as a child left a lasting impression," Janey wrote.

As the revelation over the school committee texts was playing out over the weekend, Janey was also deciding the fate of Boston’s police commissioner after decades-old domestic violence accusations came to light.

Dennis White’s removal came four months after he was placed on leave just days into his job. White, who waged a bitter legal battle to keep the job, had been appointed by Walsh, who later said he was unaware of the accusations.

Janey said keeping White on the job “would send a chilling message to victims of domestic violence in our city and reinforce a culture of fear and a blue wall of silence in our police department.”

“I am a Black man, who has been accused falsely of crimes,” White said during his termination hearing, according to a statement provided by his lawyer.

The firing of White isn’t the only police-related controversy facing the city.

Twelve current and former officers have been charged in the scheme. Prosecutors say more than $250,000 was embezzled.

And on Beacon Hill, Gov. Charlie Baker has been facing increasing scrutiny of his handling of a COVID-19 crisis at the Holyoke Soldiers’ Home, with calls mounting for a legislative response to the outbreak that killed 76 veteran residents last year.

The tragedy led to the removal last year of Bennett Walsh, the former superintendent of the 240-bed, state-run facility.

Critics say investigations of the outbreak, including one headed by a former federal prosecutor commissioned by Baker, have raised more questions, including about Baker’s decision to appoint Walsh to lead the home in 2016 despite scant health care administration experience.

A legislative committee charged with looking into the tragedy found that “a crisis of leadership on many counts” contributed to the deaths.

Baker last week said he was eager to work with the Legislature and that he and lawmakers largely agree on the reforms needed. Baker signed a $400 million spending bill to finance construction of a new home.

Boston, of course, is no stranger to crises.

The most notable in recent decades came in the turmoil over school busing in the 1970s that thrust Boston into the national limelight and exposed in ugly ways the city's simmering racial tensions — a crisis that also helped give rise to a new generation of leaders in communities of color that have transformed the city's political landscape.