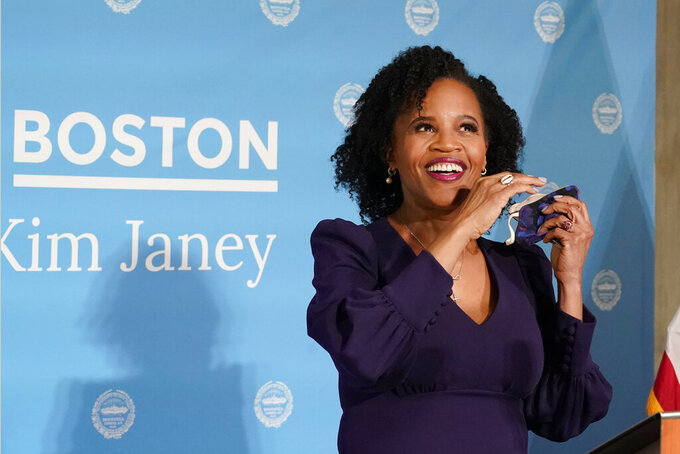 Former Boston City Council President Kim Janey, 55, takes off her face mask to speak after she was sworn in as Boston's new mayor at City Hall, Wednesday, March 24, 2021, in Boston. Janey, who is the city's first female and first person of color to take the office, replaces Marty Walsh who resigned Monday evening to become President Joe Biden's labor secretary. (AP Photo/Elise Amendola)

BOSTON (AP) — Kim Janey, who as a child had rocks hurled at her school bus during Boston's desegregation era, marked her historic elevation as the first woman and first Black person to serve as mayor of the city with a ceremonial swearing-in event Wednesday.

Janey replaces fellow Democrat Marty Walsh, who resigned Monday to become President Joe Biden’s labor secretary. She was the City Council president and will serve as acting mayor until a mayoral election in the fall.

Janey hasn’t said whether she’ll run. But she embraced the groundbreaking nature of Wednesday's transition.

“Today is a new day. I stand before you as the first woman and the first Black mayor of Boston, the city that I love,” Janey said during the City Hall event. “I come to this day with life experience that is different from the men who came before me.”

Janey, 55, promised to bring urgency to the job. She said her administration will be open to those who have felt disconnected from the city's power structure.

Helping the city emerge from the pandemic and creating a more equitable economy will be among the top goals of her administration, according to Janey, who pledged to boost testing and vaccine access in neighborhoods hardest hit by COVID-19.

Janey also promised to address food, housing and public transportation insecurity and work to close the city's wealth gap in part by ensuring that minority-owned businesses have a fairer shot at city contracts. She also pledged to work to ensure that police in the city serve all residents fairly.

“Over the past year, the same communities hardest hit by the public health crisis have experienced the highest rate of housing and food insecurity,” Janey said. “I will address these economic disparities with new urgency to reopen Boston's economy with equity."

Justice Kimberly Budd, who administered the oath, was named chief justice of the Massachusetts Supreme Judicial Court in 2020, the first Black woman to lead the state’s highest court.

U.S. Rep. Ayanna Pressley, who presided over the ceremony, was the first Black woman both to serve on the City Council and to be elected to Congress from Massachusetts.

Pressley described Janey as “a proud fourth-generation daughter of Roxbury," the heart of the city’s Black community.

“She will lead with clear eyes, a full heart, and a steady hand," Pressley said. "She will make a profound difference."

Janey's grandfather, Daniel Benjamin Janey, was a member of Twelfth Baptist Church, where Martin Luther King Jr. worshiped while attending Boston University. Her father was one of only eight Black students to graduate from the city’s prestigious Boston Latin School in 1964.

During the second phase of Boston’s tumultuous school desegregation era, Janey was bused as an 11-year-old girl to the largely white neighborhood of Charlestown.

“I had rocks and racial slurs thrown at my bus simply for attending school while Black," she said.

She began her career in advocacy with Massachusetts Advocates for Children, pushing for policy changes she said were aimed at ensuring equity and excellence for public school students in Boston.

In 2017, she won a 13-candidate race and became the first woman to represent her district, which includes most of Roxbury and parts of the South End, Dorchester and Fenway areas of the city.