Brazil squad agrees to play in Copa America despite concerns 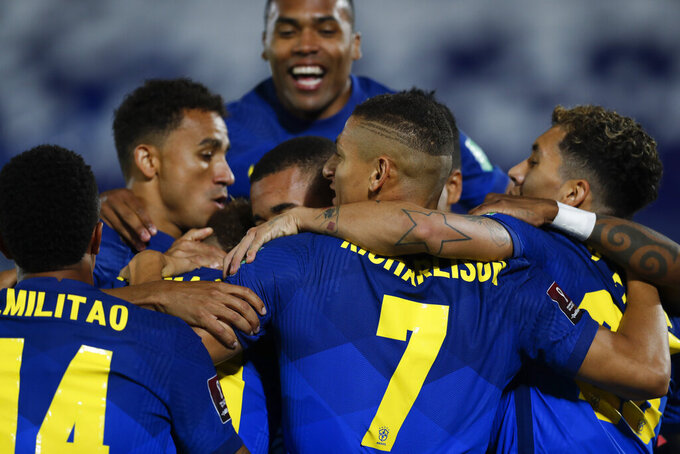 SAO PAULO (AP) — Brazil's national soccer squad has agreed to play in the Copa America despite expressing concerns over the late decision to stage the continental tournament in its home country.

Players used social media to publish a message saying they are “unsatisfied" with South American soccer's governing body, CONMEBOL, which decided to move the tournament to Brazil after Colombia and Argentina were dropped as co-hosts.

They said they don't want to make the organization of Copa America a political debate, though.

“We are a cohesive group, but with different ideas,” the players' post said. “For multiple reasons, humanitarian or of professional nature, we are unsatisfied with the leading of Copa America by CONMEBOL, no matter if it were hosted belatedly in Chile or in Brazil.”

“All the recent facts make us believe it was an inadequate process," the players' post added.

Brazil has alarming COVID-19 figures, with more than 475,000 deaths attributed to the coronavirus. Players did not address the pandemic directly in their text.

Local media reported over the last week that many Brazilian players weren't necessarily worried about the virus, but felt they had to voice their criticism to the president of the Brazilian soccer confederation, Rogerio Caboclo, for deciding to move the tournament without consulting them.

Caboclo was suspended from his office on Sunday following a sexual harassment case. He denies any wrong-doing. The 30-day forced absence may be extended by the ethics committee of the Brazilian soccer confederation.

“We are workers, professional footballers. We have a mission to take with the historic green and yellow shirt that won the World Cup five times," the players' message said. "We are against the organization of Copa America, but we will never say no to the Brazilian national team.”

Organizers did not immediately respond the criticism of Brazil players.

Brazil and Venezuela are scheduled to open the Copa America at the Mané Garrincha stadium on Sunday evening in the capital Brasilia. But the country's top court could stop it when it votes Thursday on whether or not the tournament can proceed.

On Friday, after Brazil’s 2-0 home win against Ecuador in a World Cup qualifying game, coach Tite said he and his players would delay an announcement on whether they would participate in the tournament, in a decision that mixes views on pandemic control and internal politics.

The announcement came after Tuesday's match against Paraguay in World Cup qualifiers. Brazil won 2-0, with goals by Neymar and Lucas Paquetá. The Brazilians lead the table with six wins in six matches.

President Jair Bolsonaro is a staunch supporter of the tournament being held in Brazil. The far-right leader has defied social distancing policies, claiming shutdown measures kill more than the virus.

Many Bolsonaro supporters have criticized Tite since Friday, suggesting the coach was leading a boycott against the tournament for an alleged opposition to the president. The coach never said his players should skip Copa America, but local reports said team captains discussed that possibility over the last week.

Juninho Paulista, the coordinator of Brazil's national team, said in the post-match news conference Tuesday that the text published by players also includes the opinion of the coaching staff.

Tite insisted since last week his priority was the two rounds of World Cup qualifiers that Brazil played and won. He promised to discuss the decisions around Copa America after the match against Paraguay, but fell short when he had the chance.

Tite is expected to announce Brazil's squad for Copa America on Wednesday.