Brazil wins World Cup qualifier amid drama off the pitch 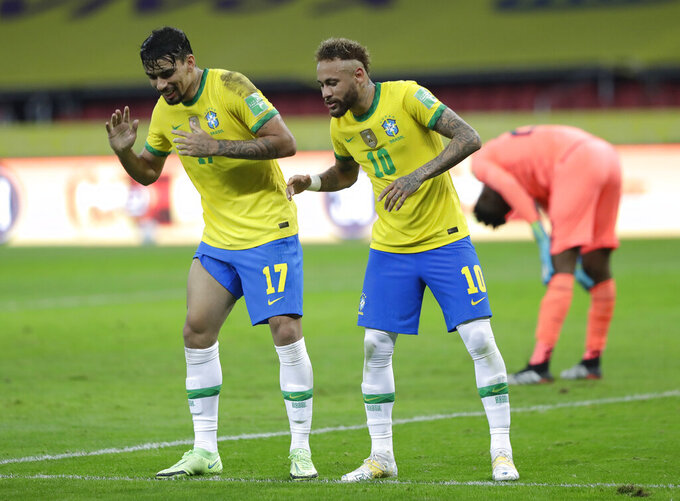 Brazil now leads the round-robin tournament with 15 points, four ahead of second-place Argentina. It appears all but certain that Brazil will qualify for one of the four direct South American spots for Qatar 2022.

Gabriel Barbosa had a goal disallowed for offside in the first half before Richarlison opened the scoring in the 65th minute with a powerful shot from close range. Neymar assisted on the first goal and added the second from the spot in added time. The penalty was awarded after a video review, which also allowed Brazil's No. 10 to take a second chance after being stopped by goalkeeper Alexander Dominguez.

Both goals were celebrated with the entire team around coach Tite. All players escorted Tite to the dressing room after the match.

Drama has been brewing around team since Brazil agreed to host Copa America. Team captain Casemiro suggested Friday that the players don’t want to be at the tournament at home while Brazilians are still dying in large numbers from COVID-19. More than 470,000 Brazilians have died so far from the coronavirus.

Copa America was originally scheduled to be co-hosted by Colombia and Argentina. Colombia was forced to withdraw because of social unrest and Argentina last week declined to host the continental tournament because of a worsening of the pandemic.

Tite's post-match news conference was highly anticipated after rumors swirled during the day that he could resign before Copa America begins. The coach avoided giving details of what is to come, but did not rule out leaving the job.

On the eve of the match, Tite admitted that his players had discussed with the president of the Brazilian soccer confederation whether or not they should play the continental tournament. A final answer on the issue is expected after the match against Paraguay on Tuesday.

“I am doing my job normally. I always do. I am at peace with myself," said Tite, who was wearing a mask during the entire news conference. “My adversities are very little in comparison with other people."

Asked whether he could leave the job next week, Tite replied: “You can raise any hypothesis, I only ask you to be careful. I will express it when it matters. Not now. This was a tough match against Ecuador."

Casemiro said after Friday's win over Ecuador that “the players' position is very clear. More clear than this is impossible for now.”

“We want to speak after the match against Paraguay because we don't want to lose our focus,” Casemiro said. “This is the World Cup for us.”

The midfielder added any decision “will come from all" Brazil players. Local media has reported that Brazil's Europe-based players were leading a push against playing in Copa America.

Ecuador defender Robert Arboleda added that national team captains were discussing their participation in the South American championship, which is scheduled to be played June 13-July 10.

“There's a lot of people dying and something must be done. For us players it is hard to go to a hotel because people with the virus could give it to us and then we can infect the whole squad,” he said, without answering whether he and his team will play in the tournament.

The next South American World Cup qualifiers will be played on Tuesday: Paraguay is up against Brazil and Colombia takes on Argentina. Also, it's Ecuador vs. Peru, Venezuela vs. Uruguay and Chile vs Bolivia.