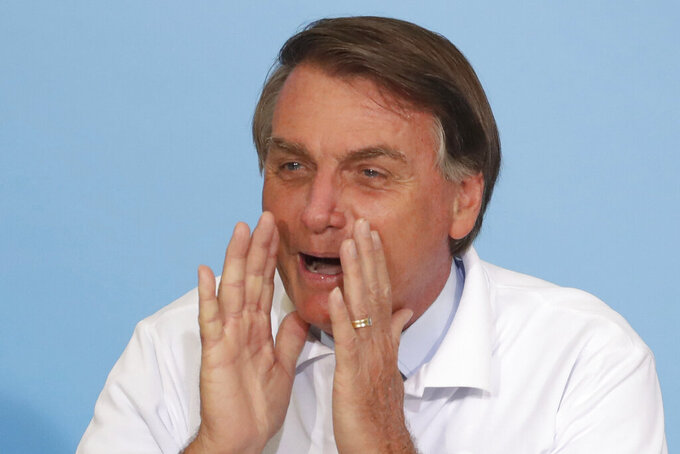 Brazil's President Jair Bolsonaro speaks to one of his ministers during a ceremony commemorating the 160th anniversary of the state bank Caixa Economica Federal at Planalto presidential palace in Brasilia, Brazil, Tuesday, Jan. 12, 2021. (AP Photo/Eraldo Peres)

SAO PAULO (AP) — Brazil’s President Jair Bolsonaro delivered a profanity-laced attack on the media Wednesday after reports that his administration spent $3 million on cans of condensed milk in 2020 sparked outrage and ridicule. The purchases triggered a debate over spending priorities weeks after he declined to extend a pandemic welfare program.

Bolsonaro issued expletives and insults against journalists while addressing dozens of supporters at a restaurant in Brasilia, adding the 2.5 million cans of condensed milk, one of his favorite desserts, will feed more than 370,000 members of the armed forces, among others.

“This (the cans of condensed milk) is to stick up your rears, you in the press!” Bolsonaro said in a video published on multiple social media channels, as his supporters and ministers cheered him on. “These frivolous accusations don’t take us anywhere. And if they accuse me of this, it’s because they have nothing else to accuse me of.”

News of the purchase garnered so much attention that the government’s website for spending transparency crashed on Tuesday, as an excessive number of curious Brazilians sought to review the figures. Bolsonaro told his supporters prior administrations spent more on condensed milk than his. The website came back online on Wednesday.

Brazilian social media was flooded by memes linking Bolsonaro with condensed milk on Tuesday, including one that portrayed soldiers painting a curb with paint cans filled with the viscous liquid.

Earlier on Tuesday, Bolsonaro told supporters in social media messaging app Telegram that condensed milk is ideal for soldiers, because many operate in isolated regions where fresh milk can’t be sent. The Brazilian president has posted pictures of himself eating bread covered with condensed milk since his victorious presidential campaign in 2018.

His disdain for the mainstream media dates back to even before his candidacy, when he was a fringe lawmaker.

Bolsonaro is facing pressure after almost a year downplaying COVID-19. His administration so far has secured only 12.8 million shots for 210 million Brazilians, most purchased from a state governor who is his political rival. Almost 220,000 people have died of the disease in Brazil.

Also on Tuesday his administration started paying the last batch of handouts worth $110 to nearly 200,000 Brazilians, an initiative that helped tens of millions during the pandemic. Bolsonaro decided to end it, despite pressure from lawmakers, due to government spending limits.

And days after his administration declined to purchase 331 million syringes for COVID-19 vaccination citing inflated prices, Bolsonaro blamed the media for overblowing the pandemic and seeking to undermine his administration.

“Brazil is broke and I can’t do anything,” he said told supporters on Jan. 5. “I wanted to change the income tax table, but there was this virus, pumped up by this media we have, this media with no character. It is relentless work to wear us out to get us out of here.”