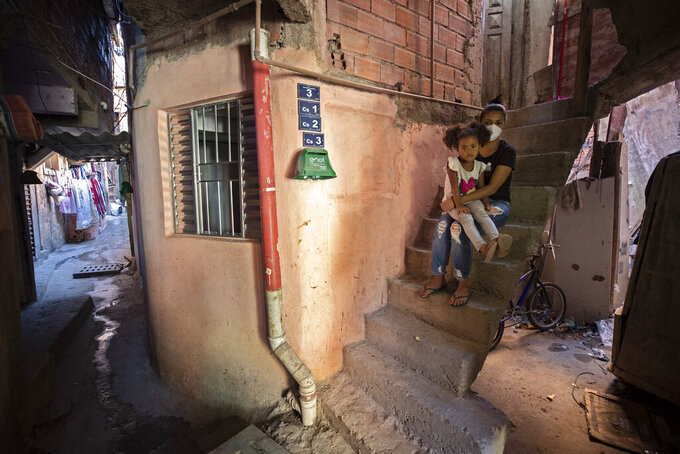 Ana Carolina Silva, who lost her job during the COVID-19 pandemic, sits with her daughter Cataleia outside her home in the Paraisopolis favela of Sao Paulo, Brazil, Monday, May 24, 2021. (AP Photo/Andre Penner)

RIO DE JANEIRO (AP) — Brazil's economy grew more than expected in the first quarter of 2021, continuing its rebound from pandemic recession as many declined to hunker down amid COVID-19's brutal second wave.

Latin America's largest economy grew 1.2% from the fourth quarter, according to data the national statistics agency released Tuesday. That was above the 0.7% median forecast from economists surveyed by Broadcast, the real-time financial news service of Agencia Estado. The increase was led by a 5.7% jump in the agriculture sector, and also included a 4.6% surge in investments.

Brazil’s economy has returned to pre-pandemic levels of activity after a 4.1% recession last year that was smaller than its neighbors, some of which contracted by twice as much. In large part that was due to the generous pandemic welfare program that reached about a third of the population and buoyed activity. At the same time, President Jair Bolsonaro denounced restrictions aimed at containing the pandemic, saying economic activity must not grind to a halt, and he influenced many local leaders and residents.

“Even with the second wave of the COVID-19 pandemic, GDP grew in the first quarter, given that, unlike last year, there weren’t as many restrictions that impeded economic activity in the country,″ the statistics agency’s GDP survey coordinator, Rebeca Palis, said in a statement.

Bolsonaro celebrated the GDP results, saying on Twitter that they stem from "intense work that prioritized, in addition to fighting the illness, protecting jobs and guaranteeing Brazilians' dignity.″

But health experts have said that heightened activity boosted COVID-19's impact, and some have begun warning that a third wave may be taking shape. The nation's daily death toll has receded from more than 3,000 a day in mid-April, when Brazil was the virus' global epicenter. It remains the world's second-highest at 1,850, according to Our World in Data, an online research site.

Family consumption, the largest component of demand in Brazil's economy, stalled in the first quarter. That reflected withdrawal of pandemic welfare at year-end 2020, a struggling job market, and double-digit food inflation, according to Palis. The welfare was reintroduced in April at a significantly reduced level, but Brazil's poor continue to suffer.

The economy ministry last month raised its 2021 GDP outlook to 3.5%, in line with market economists surveyed by the central bank, who have boosted their forecasts for six straight weeks, to 3.96%. Revisions came on the heels of data indicating Brazilians who needed to earn their livelihoods, or were burned out on quarantine, sustained activity.

Tuesday's GDP figures reinforce those leading indicators. After release of the data, Goldman Sachs raised its 2021 GDP forecast for Brazil to 5.5% from 4.6%, according to a note from Alberto Ramos, head of Latin America economics.

"Overall, the data confirm that Brazil’s economy held up pretty well during the virus waves in the first quarter – and that seems to be what’s happening in Q2 too,″ William Jackson, chief emerging markets economist at Capital Economics, wrote in a note.