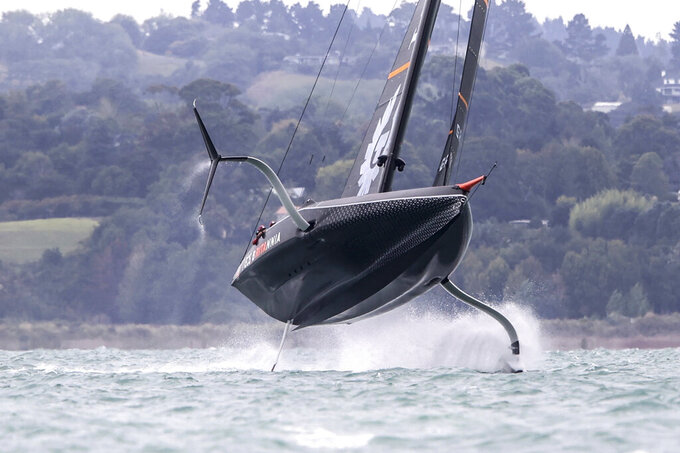 WELLINGTON, New Zealand (AP) — Britain’s INEOS Team UK is hoping for a momentum shift in its America’s Cup challenger series final against Italy’s Luna Rossa Prada Pirelli as a coronavirus lockdown in host city Auckland has led to a longer than expected break in racing.

Luna Rossa leads the first-to-seven-win series 4-0 after winning two races Saturday and Sunday on each of the first two days of the Prada Cup final. Racing was due to resume with two races on Wednesday but a small community outbreak of COVID-19 has seen the series delayed at least by a day as Auckland locks down for 72 hours.

While no new cases were reported Monday, the lockdown may be extended until further community transmission can be ruled out. That could see the challenger final, due to end Feb. 22, further disrupted.

The teams have no choice but to use the available time to review their performances to date and, in Team UK’s case, to find a way to close an obvious gap on Luna Rossa.

“We have to break that momentum,” Team UK skipper Ben Ainslie said. “In sport momentum is pretty powerful and it has been with the Italians. We have to turn that around. We need to regroup and come back stronger.”

Ainslie knows better than most that remarkable changes of fortune are possible in the America’s Cup. He was a teammate of Luna Rossa helmsman James Spithill with Oracle Team USA which in 2013 rallied from 8-1 down in the first-to-nine win America’s Cup match against Team New Zealand to win 9-8.

“We know we’re up against really tough opposition, that was our expectation," Ainslee said. “But in a decent breeze we’ve got a boat that can do it so it’s down to us. We’ve just got to go out sail hard, get stuck in and we can do it.”

“Given what I went through in the past I’m the last person in the world to be counting my chickens,” he said. “Ben and I went through that together, so we know better than anyone. It doesn’t matter whether you are four up or four down."

“As soon as we get a bit of breeze we have a pretty even boat race,” he said. “We just need to up our game and do the boat proud.

“It’s very subtle between success and failure. It’s split-second and not much in it. We need to make sure that we keep going through our processes but start getting it right when it counts.”