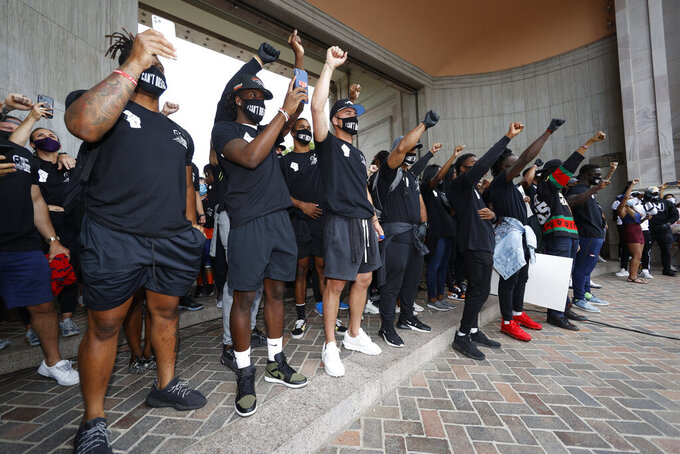 Denver Broncos take part in a rally in the Greek Amphitheatre in Civic Center Park over the death of George Floyd Saturday, June 6, 2020, in downtown Denver. (AP Photo/David Zalubowski)

DENVER (AP) — Denver Broncos coaches and players marched and spoke out against racism and police brutality at a protest in downtown Denver on Saturday.

The players wore black shirts with the fist of power image and “Justice for George Floyd” emblazoned on the front and the words, “If you ain’t with us, you against us” on the back.

All of them wore face masks in accordance with coronavirus mitigation efforts, and most of the players’ masks were black with the phrase “I can’t breathe” in white lettering.

Safety Kareem Jackson was instrumental in organizing the team’s appearance at Civic Center Park on the 10th day of demonstrations sparked by the death of Floyd, a handcuffed black man in Minneapolis who died after a white police officer knelt on Floyd’s neck for nearly nine minutes.

Safety Justin Simmons flew in from Florida to join dozens of his teammates at the demonstration that included quarterback Drew Lock and first-round draft pick Jerry Jeudy, making his first trip to Denver.

Simmons and linebackers Von Miller, Alexander Johnson and Jeremiah Attaochu were among the Broncos who spoke to the crowd of thousands from the steps of the Greek Amphitheater. Afterward, the team marched with other demonstrators through downtown streets, fists raised and chanting, “I can’t breathe!” and “Black lives matter!”

The crowd was about evenly split between whites and racial minorities, something Simmons, who is biracial, said was important.

Simmons thanked his “fellow black brothers and sisters,” asked them to look around and see the support they had and implored them to “keep fighting the good fight.”

“I understand the grief, I understand the pain, I’ve lived it, I’ve been a part of it,” Simmons said. “I’m standing here today telling you hate does not drive out hate, OK? ... We have to make sure we stick together. ... This is making a difference.”

Simmons thanked the white demonstrators for coming out and asked them to continue speaking out against racism and excessive use of force by police against racial minorities “because you have more power in your voice than we could ever have.”

Failing to spread the word, he said, would stifle real change and justice.

“If you can look at white people and do not have those conversations their lives will not be affected by it,” Simmons said. “But black lives will.”