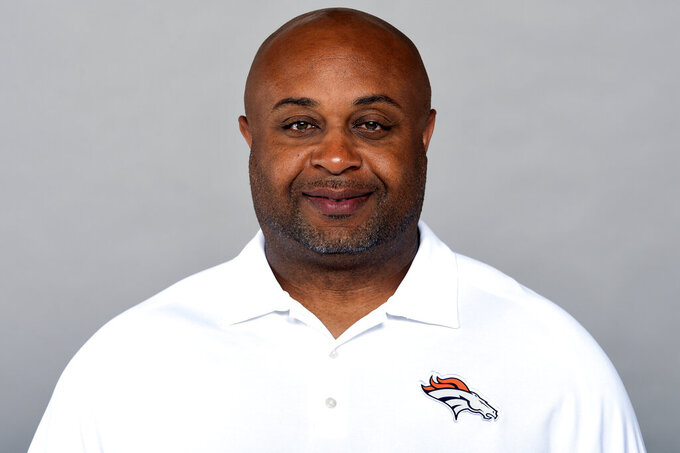 This is a 2019 photo of Curtis Modkins of the Denver Broncos NFL football team. Modkins has tested positive for COVID-19 and won’t accompany the team on its trip to New England. The Broncos said they learned of Modkins’ diagnosis early Saturday, Oct. 17, 2020. (AP Photo/File)

The Broncos said they learned of the diagnosis early Saturday.

“Curtis is currently at home in self-isolation and experiencing no symptoms,” the team said. “We have evaluated close contacts, administered necessary point of care testing (no positive COVID-19 results) and implemented additional health and safety measures at UCHealth Training Center per NFL-NFLPA protocols.”

“We will take all necessary precautions to ensure the safety of our team, opponents and community,” the team added.

The Broncos were originally scheduled to play at New England last weekend but that game got delayed twice, first by a day, then by seven, after several coronavirus cases on the Patriots, including those of Cam Newton and Stephon Gilmore.

On Friday, the Broncos held running back Melvin Gordon out of practice because of what coach Vic Fangio said was an illness unrelated to the coronavirus.

The Patriots canceled practice Friday and later placed center James Ferentz on the reserve/COVID-19 list. He's the fifth case on the Patriots, who returned to practice Saturday.

On Saturday, the Broncos announced they had elevated defensive lineman Sylvester Williams to the active roster along with running back Jeremy Cox and linebacker Josh Watson.

They also released quarterback Blake Bortles, whom they signed after Drew Lock sprained the rotator cuff in his right shoulder in Week 2.

Luck is expected to start Sunday.