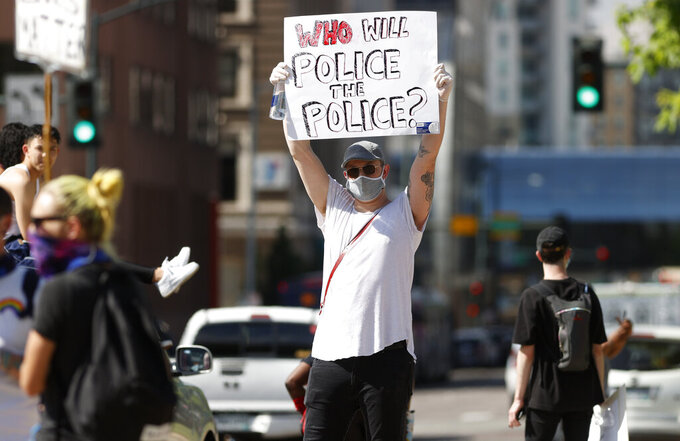 A demonstrator wears a face mask and latex gloves while waving a placard along Lincoln Avenue during a protest Tuesday, June 2, 2020, in Denver over the death of George Floyd, a handcuffed black man in police custody in Minneapolis. (AP Photo/David Zalubowski)

Instead of X's and O's, the Denver Broncos spent Tuesday talking about racial injustice, police brutality and healing a nation rocked by demonstrations over George Floyd’s death in Minneapolis on top of the coronavirus outbreak and its economic devastation.

Team president Joe Ellis addressed the offense and defense in separate Zoom calls that replaced the team’s regular video conference sessions, which are a substitute for in-person training during the pandemic.

Coach Vic Fangio and general manager John Elway also participated in the calls, in which Ellis emphasized society’s need to eradicate racism and told the players that the organization shares in the outrage over Floyd’s death last week.

Ellis, who told players he wanted to hear from them before issuing a statement, also listened as more than a dozen players spoke up on the calls.

“My takeaway from it was that we have to figure out what we can do, not only as a team, but as an organization,” safety Kareem Jackson said. “How can we get out and how can we impact the Denver community? Maybe we can get out and put together a march as a team or something like that.”

After the Zoom calls, the Broncos tweeted, “We will stand by our players. We will lift up their voices. We can do more. We will do more.”

The team also retweeted several players’ personal posts, including Malik Reed’s: “I have been one of the ones to not be outspoken about the things we go through, but that doesn’t help create change. My heart goes out to everyone who has lost someone due to the wickedness of this world.”

Floyd, a black man who was handcuffed, died May 25 after a white Minneapolis police officer, Derek Chauvin, pressed his knee into Floyd’s neck for several minutes even after Floyd stopped moving and pleading for air. Chauvin was fired along with three other officers and faces homicide charges.

Fangio started off a media call a few hours later by saying, “I was shocked, sad and angry at what I saw a policeman do to a handcuffed George Floyd. ... He should be punished to fullest extent of the law for the crimes he has been charged with in addition to being charged with treason for failing to uphold the badge.”

Fangio said he has the utmost respect for police but added that Chauvin “failed the 99 percent of police that do a great job and we are all paying the price for that.”

Denver is among the dozens of cities where peaceful protests during daylight hours have been followed by break-ins, stealing and clashes with police come nightfall.

Fangio said society could learn a lot from an NFL locker room, where skin color is no barrier.

“We’re a league of meritocracy,” Fangio said. “You earn what you get, you get what you earn. I don’t see racism at all in the NFL. I don’t see discrimination in the NFL. We live in a great atmosphere. ... We’re lucky. We all live together joined as one for one common goal, and we all intermingle and mix tremendously. If society reflected an NFL team, we’d all be great.”

Fangio said the words of Kareem Abdul Jabbar and Broncos safety Justin Simmons especially resonated with him over a weekend of increasing unrest and said that sports brings people together.

“I look forward to the Broncos and the NFL leading that charge,” Fangio said.

Simmons, the team’s 2019 Walter Payton Man of the Year nominee, helped lead a peaceful protest in Florida on Sunday. He called for unity and non-violence.

Simmons implored a crowd to “understand that we are fighting for equality, not superiority. All lives matter when black lives matter. We pledge our allegiance to the flag for freedom and justice for all and we do not have our justice. So let’s understand that. We will get it, (but) not by force.”

Fangio also praised Simmons, saying, “I think Justin is one of those guys that will help us find solutions and lead us out of this mess that we’re in.”