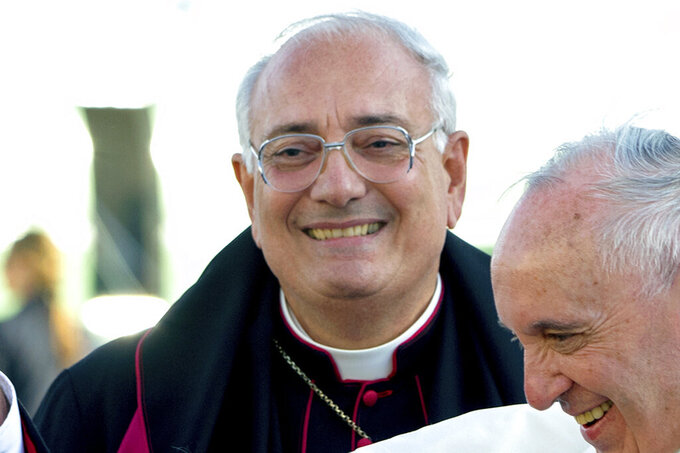 NEW YORK (AP) — The longtime head of the Roman Catholic Church in Brooklyn said Friday that a ruling by the Supreme Court that barred New York from enforcing certain restrictions on religious services in areas hit hard by the coronavirus is a “good decision” that guarantees constitutional protections for the free exercise of religion.

The high court late Wednesday sided with the Diocese of Brooklyn and other religious organizations in New York state in temporarily barring New York from enforcing the restrictions against the groups. In an unsigned opinion the Supreme Court said the restrictions “single out houses of worship for especially harsh treatment.” The groups said the state action had limited attendance for religious worshippers while other businesses in state-designated red zones could remain open without capacity limits.

“Right now, we see this as a good decision, opening up the understanding that First Amendment rights are much more powerful than the right for somebody to shop,” Bishop Nicholas DiMarzio said in an interview with the Associated Press.

“I think the pope’s words are wonderful. I don’t think we protested. I don’t think we’ve ever negated the rules that were imposed upon us, except we had a difference of opinion on the number of people that could go into a building. That’s a big difference from flaunting the rules, as some congregations have done in Brooklyn and Queens," he told the AP. "They refused to take precautions. That was not our case. We complied with everything we were asked to do and more.”

“So, I think that it’s a big difference. I don’t think those words of the pope really apply to us - this is not an ideological issue. It’s not anti-government, but it is looking at the First Amendment that people have a right to worship when it’s possible.”

New York City became an early U.S. hot spot of the pandemic and the deadliest with some of the city’s worst-hit areas concentrated in Brooklyn and Queens.

The Diocese of Brooklyn and Agudath Israel of America have churches and synagogues in areas of the two boroughs previously designated red and orange zones. The state had capped attendance at houses of worship at 10 people in red zones and 25 people for orange zones. But those areas are now designated as yellow zones with less restrictive rules neither group challenged.

New York Gov. Andrew Cuomo has said that the court’s decision is “irrelevant from any practical impact” given that the restrictions have already been removed. Cuomo also said that the 5-4 ruling, with new Justice Amy Coney Barrett in the majority, is more about demonstrating that the high court has changed its stripes. But DiMarzio disagreed.

“(Cuomo) said the court changed its decision because it’s politically convenient, it has nothing to do with that” DiMarzio said. “The Supreme Court many times changes its position.”

Churches under the Diocese of Brooklyn were disproportionately hit and suffered many losses at the onset of the pandemic. The Rev. Jorge Ortiz-Garay, the pastor of St. Brigid Church in Brooklyn, was the first Catholic cleric in the U.S to die from the coronavirus. By July, Saint Bartholomew Roman Catholic Church in Queens, reported that at least 74 parishioners had died from COVID-19.

DiMarzio said that Ortiz-Garay and the Rev. Gioacchino Basile, a priest of the Archdiocese of Newark who was ministering as pastor of Saint Gabriel Church in East Elmhurst, contracted the virus before rules had been issued on how to protect against the pandemic.

“So, you shouldn’t be looking at that. Subsequently with the idea of St. Bartholomew, for example: It doesn’t mean they got sick in church. It means they got sick.”

DiMarzio said he closed the churches down 10 days before an order by the governor and delayed opening a week after that order was lifted in July. “So, I think we’ve been overly cautious...” he said. A spokesperson for the Diocese of Brooklyn said that St. Bartholomew has not reported any new deaths since July, according to the church’s pastor.

The 18-point precautions at churches in Brooklyn and Queens under the diocese’s jurisdiction include sanitizing churches regularly, asking everyone to wear a mask for the entire Mass and keeping social distancing. Members of the clergy must also sanitize their hands before Mass, while congregants cannot exchange peace or hold hands during the recitation of the Lord’s Prayer, and the Holy Communion must be given in the hand. DiMarzio also said that all Masses are live streamed and in-person services have been capped to about 50% capacity.

“Look, we were the epicenter at the beginning of this. Now, we’re the best. From the worst we became the best because of the restrictions and the way people followed them,” he said, calling the rules issued by Cuomo overtly restrictive.

“Ten people to 25 people in churches that hold 500 and 1,000 people, that’s the crux of the matter, because we were designated to be non-essential. So, we were put with theaters and bowling alleys and other things that were recreational, and not with something that’s essential as a church.”

DiMarzio expects the Christmas season to be challenging but essential for believers after a long pandemic.

“People want to go to Mass at Christmas. The children need to see the Nativity and act it out, sometimes in different churches. So, we’re trying to prepare for that again safely,” he said.