Brooklyn building collapses after being cited by inspectors 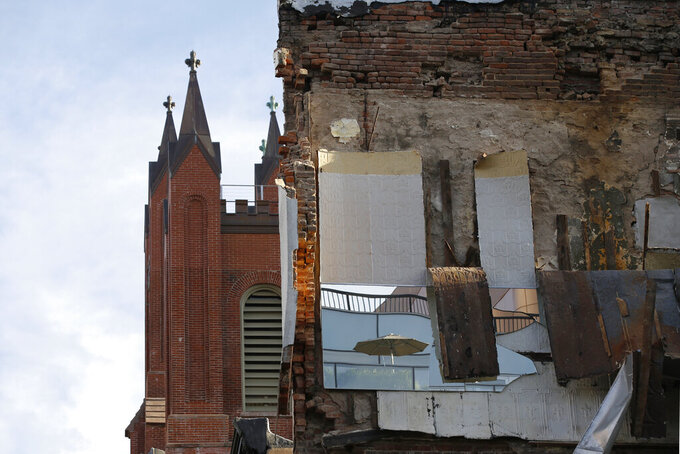 A building across the street is reflected in a mirror hanging from the remains of a multistory building that collapsed Wednesday, July 1, 2020, in the Carroll Gardens neighborhood of the Brooklyn borough of New York. The building, which housed a health club, had been shuttered during the pandemic, but collapsed just three weeks after building inspectors had ordered a halt to some construction because of structural problems. (AP Photo/Kathy Willens)

NEW YORK (AP) — A multistory health club shuttered by the coronavirus pandemic collapsed into a heap of rubble on a Brooklyn street Wednesday, three weeks after building inspectors ordered a halt to some construction work at the location because of structural problems.

The fire department said one person had been inside the building on the second floor, but made it out before emergency personnel arrived at the scene and was treated only for minor injuries.

Officials did not know why that person was inside the structure.

Inspectors issued a partial stop work order June 10 for the building because of a “brick wall dangerously bulging over” a sidewalk that was left unprotected during demolition work, Buildings Department records show.

The department has received a handful of complaints going back more than a decade about cracked and bulging walls at the building. In March, inspectors cited cracks in several areas of the building.

The department said it has personnel at the scene investigating the collapse.

No working telephone numbers were immediately found for the building's owner.

The collapsed building is located on a busy street of restaurants and shops in a neighborhood of brownstones where traditional Italian bakeries and social clubs have given way in recent years to wine bars, boutique shops and farm-to-table restaurants.