Browns fumble away first shot at playoffs amid wild weekend 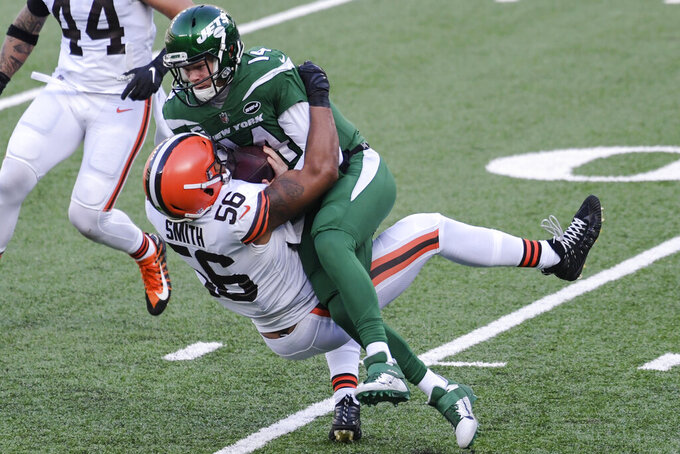 CLEVELAND (AP) — The Browns had handled so many of 2020's obstacles, navigating the coronavirus minefield and overcoming injuries while becoming one of the NFL's biggest surprises.

Sunday's 23-16 loss to the New York Jets, which came after Cleveland lost six players because of COVID-19 protocols, dumped the Browns into the final wild-card spot and left them in a win-or-else scenario this week against the Pittsburgh Steelers.

The league's longest playoff drought — going back to 2002 — drags on.

On Monday, coach Kevin Stefanski, who has refused to make excuses for him or his players during a first year in Cleveland he won't forget, bemoaned the Browns' mistakes — penalties, turnovers, three fumbles by Baker Mayfield and dropped passes.

“Just was sloppy,” he said.

So, too, was the apparent behavior of some Browns players last week as a positive coronavirus test for linebacker B.J. Goodson morphed into wide receivers Jarvis Landry﻿, Rashard Higgins﻿, Donovan Peoples-Jones and KhaDarel Hodge along with rookie linebacker Jacob Phillips all being ruled out of the game as high-risk close contacts.

In addition, rookie left tackle Jedrick Wills was scratched because he had COVID-19-like symptoms. That decision came after he was activated on Saturday, two days after being placed on the COVID list from being exposed to an infected person outside the team.

The close contact with Goodson occurred when the players were together in the recovery pool area at the team's facility, which was redesigned months ago to adhere to league guidelines for player safety.

Stefanski refused to offer any specifics about the situation or what led to the players becoming ineligible. But much like in the game, corrections need to be made.

There's a lot to process for Stefanski, who's being criticized for having Mayfield throw 53 times. Stefanski had been expected to lean on his strong running game, but the Browns were missing two starting linemen — Wills and right guard Wyatt Teller — and the Jets jammed the point of attack.

After learning he'd be without so many players, Stefanski said there wasn't enough time to radically change the game plan. He decided to push forward with a proven formula despite being short-handed, and it didn't work.

The Browns were a shell of themselves.

“That is not why we lost yesterday,” he said, reiterating his postgame stance. "We got beat. I got outcoached. We have to be better. We had the players we needed to win that game, and we did not get it done.”

They've got one more chance to get it right.

For obvious reasons, not much went right. Mayfield kept the Browns close despite not having his usual weapons and his fumbles, the last coming on a fourth-down sneak at the Jets 16-yard line with 1:25 left, were costly.

He blamed himself for the loss.

“We will coach him up,” Stefanski said. "It is not one thing, and it is definitely not one person. He had some great plays and had some plays he wishes he had back. I have a ton of confidence in him.”

Cleveland's running game isn't the same without Teller, who missed his second straight game with a sprained ankle. Stefanski said Teller could be back at practice Wednesday.

“We miss him a ton,” running back Kareem Hunt said. “Wyatt is a great offensive lineman, a tough guy and he brings it.”

Sheldon Richardson was one of the few Browns who stepped up. The defensive tackle blocked an extra point and a field-goal attempt and was credited with a team-high 10 tackles.

Tight end Austin Hooper needed to have a big game to help offset the wide receiver mess. He made seven catches for 71 yards, but had a couple drops — in his 15 targets — and has rarely picked up additional yards after receptions this season.

Cody Parkey missed another PAT (he's 40 of 44), but Stefanski remains in his corner.

“He knows what is expected of him,” Stefanski said. "We are counting on him, and I have a ton of confidence in him.”

Stefanski said the close-contact COVID-19 players will be eligible to return Thursday, assuming there are no positive tests before then. Goodson will have to sit out against Pittsburgh as players are required to stay out 10 days after testing positive.

Everything will be on the line for the Browns in one of the biggest matchups of their rivalry with the Steelers in years. In the past, a finale with Pittsburgh usually meant a loss followed by a Cleveland coaching change. This season, the Browns can make it something worth celebrating.