Browns' Garrett still not all the way back after COVID 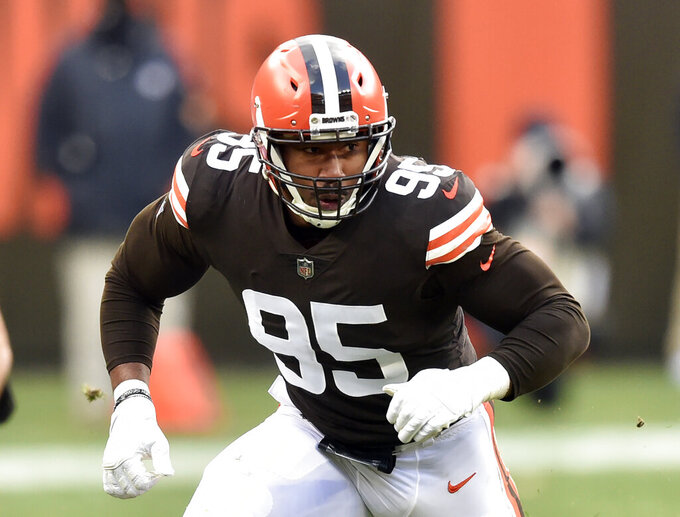 FILE - In this Nov. 15, 2020, file photo, Cleveland Browns defensive end Myles Garrett rushes the passer during an NFL football game against the Houston Texans in Cleveland. Garrett on Thursday, Dec. 10, 2020, was named the Browns' Walter Payton Man of the Year, which annually recognizes the NFL’s best players for their excellence on the field and dedication to community service. (AP Photo/David Richard, File)

Cleveland's star defensive end has played two games since missing two with the virus and said Friday that he's not all the way back.

A fitness buff and a player often called “a physical freak” by teammates and opponents, Garrett wishes those who dispute the seriousness of the pandemic or the severity of the illness would use his case as an example that it's very real.

“I do not think anybody should think they are the bulletproof or just because you are asymptomatic that it will not have any effect on you down the line,” he said. “This is something new that nobody has ever seen before.”

Garrett's only 24, a supreme athlete in the prime of his life and coronavirus flattened him. When he returned a few weeks back, he said the illness “kicked my butt.”

He wishes others weren't so dismissive or doubtful about its severity.

"People are so caught up in conspiracies and trying to downplay it that they do not actually see that it can be serious in different ways,” he said Friday on a Zoom calls as the Browns (9-4) prepared to face the New York Giants (5-8) on Sunday night. "Talk about how there are not many cases of people dying from it, but that is not all it is about.

“There are cases of people having the mental illnesses just as an effect of COVID, heart problems, lung issues and being hospitalized for days and weeks on end. There are so many things that come with being diagnosed with COVID or testing positive for COVID. You have to take it seriously.”

Garrett knows there can be long-term effects after becoming infected. But at the moment, he's most concerned about being as healthy as possible to help the Browns in their push to make the NFL playoffs for the first time since 2002.

He's had two of his 10 1/2 sacks since returning, but acknowledged he's still doesn't have the same stamina as he did before getting sick.

"I’m not sure how long it’s going to take for me to feel really 100 (percent) with my wind,” he said. “Physically, speed and strength-wise, I feel normal, it’s just about trying not to gas out too early and trying to pace myself knowing it can jump on me rather quickly.”

As he works his way back to complete health, Garrett said he hasn't had to curb his workout routine.

“I have honestly turned it up,” he said. "Just trying to catch back up to what I feel like I was at before. I want to be progressing, not digressing or going back. We will see. Hopefully, it is the right state of mind to have, but I think I am doing well and getting back to where I was with my conditioning.”

NOTES: Browns starting RG Wyatt Teller will miss Sunday's game with an ankle injury suffered Monday night against Baltimore. Coach Kevin Stefanski did not provide any specifics on Teller and said he's “week-to-week.” He missed three previous games with a calf strain. Chris Hubbard will replace Teller, who has had a solid season. ... CBs Denzel Ward (calf) and Kevin Johnson (groin), TEs Austin Hooper (neck) and David Njoku (knee) and WR KhaDarel Hodge (hamstring) are questionable, but Stefanski seemed optimistic about all of them playing.