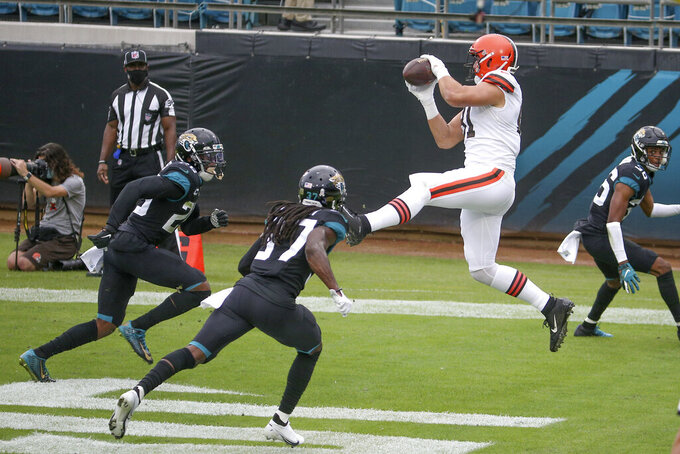 CLEVELAND (AP) — The Cleveland Browns won't have top cornerback Denzel Ward for their matchup against the Baltimore Ravens on Monday night as he continues to be slowed by a calf strain.

The team still doesn't know if starting tight end Austin Hooper will be ready. He missed his second straight practice Saturday with a neck injury and is listed as questionable.

Earlier this week, Browns coach Kevin Stefanski expressed hope Ward might be able to make it back. But the 2018 first-round draft pick, who is having a Pro Bowl-caliber season, will miss his third game in a row.

“He is working hard,” Stefanski said. "He is moving around. He is progressing about where you would expect. I am hopeful. It did not happen this week, but I am definitely hopeful for next week.”

Wide receiver KhaDarel Hodge was ruled out for the second straight game with a hamstring injury.

Hooper didn't appear on the injury report until Thursday.

“I do not know when it happened,” Browns coach Kevin Stefanski said of Hooper's injury. “It kind of popped up, if you will.”

Stefanski said Hooper's injury isn't as serious as the “fluke” one that landed receiver Taywan Taylor on injured reserve early this week.

Hooper signed a four-year, $42 million contract as a free agent with the Browns (9-3) in March after four seasons in Atlanta. He missed two games earlier this season after an emergency appendectomy. Hooper has 30 catches for 286 yards and two touchdowns.

Stefanski still expects starting right guard Wyatt Teller to be activated from the COVID-19 list in time to face the Ravens (7-5). Teller was placed on the list earlier this week after he had close contact with a person outside the Browns who tested positive.