Browns never win in Pittsburgh, so challenge is immense 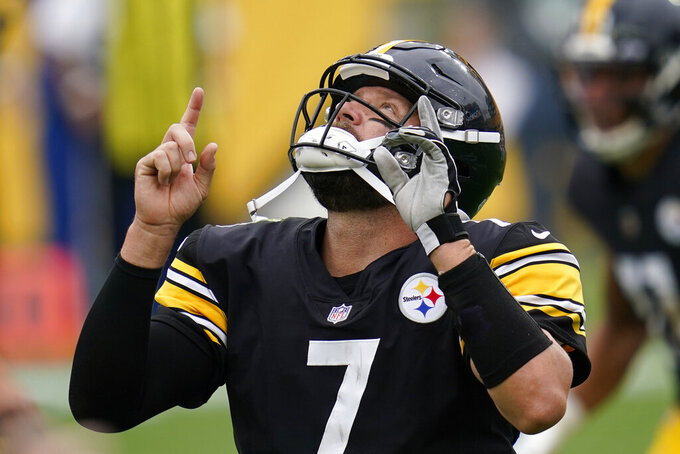 Pittsburgh Steelers quarterback Ben Roethlisberger (7) celebrates a touchdown during the first half of an NFL football game against the Philadelphia Eagles, Sunday, Oct. 11, 2020, in Pittsburgh. (AP Photo/Keith Srakocic)

Once the best of NFL rivalries, Cleveland-Pittsburgh fell on hard times as a matchup basically when the Browns left for Baltimore in 1996. The team that replaced them in Cleveland in 1999 never has measured up, and Ravens-Steelers became an AFC biggie.

Maybe now, finally, the Browns are ready for the big time.

They are 4-1 under first-year coach Kevin Stefanski, looking balanced on offense and defense. On Sunday comes their biggest test since an opening-game flop at Baltimore when they head for the short drive southeast to the Steel City, where the Browns haven't won since 2003.

“We are not worried about the past,” said quarterback Baker Mayfield, who nursed sore ribs this week. “We are worried about right now. And the next game is the most important one, and we have a very good division opponent we are going up against in their house.”

Pittsburgh, ranked fourth in the AP Pro32, is 4-0, but those opponents have a total of three victories combined. Their toughest opposition would have been Tennessee, but that game was moved to Oct. 25 because of the COVID-19 pandemic.

Cleveland, ranked 10th, is a 3 1/2 point underdog at Pittsburgh.

Could this be current Jets and former Dolphins coach Adam Gase's last game?

This might be the last time we do this all season. We are slow learners.

No team has looked better than the Packers, and they come in rested.

Your basic trap game for the Titans, who face Pittsburgh next week. Still, can’t pick Houston.

It's been a role-reversal season for these two long-time rivals.

It sure seems like forever that this game has been in limbo.

A short bus trip to another victory for the Ravens, their first ever in Philly.

Joe Judge gets to celebrate a victory as a head coach, finally.

Raheem Morris does not get his first victory as interim head coach in Atlanta.

The scoreboard might explode — or expire — in this shootout.

Joe Burrow deserves better protection and he won't likely get it here.

Matt Rhule is our early choice for Coach of the Year.