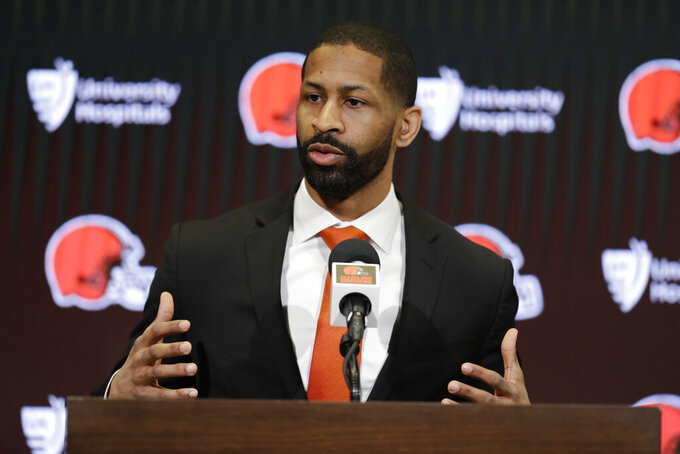 FILE - In this Feb. 5, 2020, file photo, Cleveland Browns general manager Andrew Berry speaks during a news conference at the NFL football team's training camp facility in Berea, Ohio. The Browns first-time general manager said Friday, April 10, 2020, that he's not worried about any logistical challenges that may arise during the upcoming draft, which has been forced to go virtual due to the COVID-19 pandemic. Berry said the Browns are prepared for all scenarios and he's confident the team can handle any worst-case, “Armageddon” scenarios while picking players.(AP Photo/Tony Dejak, File)

CLEVELAND (AP) — With degrees from Harvard in economics and computer science, Browns general manager Andrew Berry would seem perfectly suited to handle any pitfalls or problems he might encounter in his first NFL draft — a draft like no other.

He's a one-man IT department.

Cleveland's new general manager said Friday he’s not worried about the obvious logistical challenges or potential glitches that may arise during the upcoming draft, which has been forced to become a virtual experience for the league due to the COVID-19 global pandemic.

While some football executives and coaches have raised concerns over wireless connections, social-distancing guidelines and even potential hacking during the three-day draft from April 23-25, Berry believes the Browns will be able to handle anything.

“We are going to be prepared and ready to go regardless of the circumstances,” Berry said on a conference call. "I feel confident that we are going to have a very high-quality draft. We have a really strong support staff that has been working through a number of creative and effective solutions that we have used already throughout the free agency and draft preparation process.

"I have full confidence that we are going to be ready to go here in two weeks.”

Berry, who came back to Cleveland after one season with Philadelphia, has spent part of the past few weeks separated from his family, which delayed its move to Ohio before the virus outbreak. He's stayed busy with free agency — the Browns have signed nine players — draft preparation and planning with first-year coach Kevin Stefanski for an upcoming season that remains uncertain.

It's been a blur of Zoom meetings, FaceTime calls with prospective players and text messages.

The Browns have done their homework and Berry said the team will conduct several “dress rehearsals” before they're on the clock with the No. 10 overall pick in two weeks.

They're planning for every possible scenario — from good to bad to worst.

"We are going to make sure that we are prepared in any decision-making scenario that we have what we need if there was to be a kind of a Armageddon scenario with power, internet access or something along those lines,” Berry said.

Cleveland's primary need is at left tackle, a position it has only addressed with stopgap measures since perennial All-Pro tackle Joe Thomas retired before the 2018 season.

Fortunately for the Browns, this year's draft is loaded with quality tackles in Alabama's Jedrick Wills, Georgia's Andrew Thomas, Iowa's Tristan Wirfs, and Louisville''s Mekhi Becton. Wills and Wirfs have primarily played right tackle, and there are major questions whether they could handle a switch to the other side, where one of their primary responsibilities will be protecting quarterback Baker Mayfield's blind side.

The 33-year-old Berry, one of the youngest GMs in league history, feels pigeonholing players by their position is an archaic approach.

"Honestly, I think the distinction between left and right tackle is really outdated," he said. “We are no longer in the days of football where teams will have their best rusher and line him up on the defensive right side and offensive left side of the formation. Really, the game is not played that way. From my perspective, tackles are tackles."

The Browns are set at right tackle after signing free agent Jack Conklin to a three-year, $42 million contract.

Still, Berry's other signings would seem to point toward the Browns being focused on adding a left tackle. However, he warned not to look too closely at his recent record.

“I would not make any assumptions about what we may or may not do moving forward,” said Berry, who was Browns vice president of player personnel from 2016-18. "My goal is to make sure that we are adding talent across the roster and adding competition across the roster. That is something that we are looking forward to continuing to do over the next several months.”

NOTES: Berry would not make specific comments on the team's interest in free agent defensive end Jadeveon Clowney, who remains unsigned. “Obviously, Jadeveon, he is a good football player,” he said. “We are going to make sure if there is an opportunity to upgrade the team and we think it makes sense, we are going to be proactive there.”