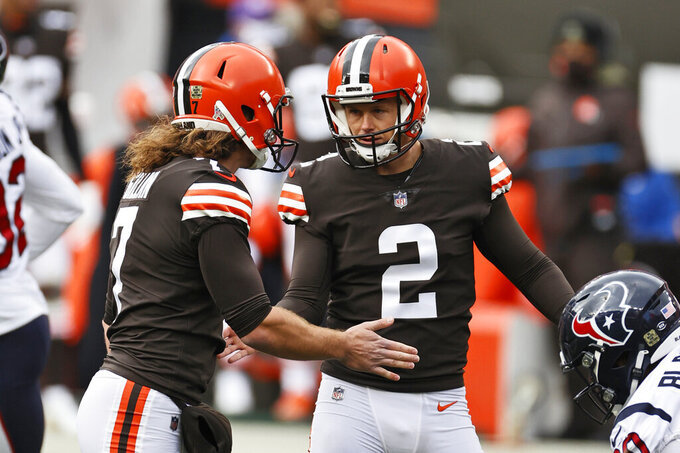 Cleveland Browns kicker Cody Parkey (2) is congratulated by Jamie Gillan after Parkey kicked a 41-yard field goal during the first half of an NFL football game against the Houston Texans, Sunday, Nov. 15, 2020, in Cleveland. The Cleveland Browns were forced to place three more players, including starting right tackle Jack Conklin and kicker Cody Parkey, on the COVID-19 list Wednesday, Nov. 18, 2020, as they prepare for this week's home game against Philadelphia.(AP Photo/Ron Schwane) 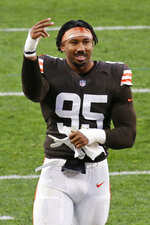 "Some soup and maybe some poems he can read up on,” the quarterback cracked.

As they try to stay one step ahead of the coronavirus, the Browns practiced Wednesday without their defensive star and were forced to place three other regulars on the COVID-19 list after they had close contact with an infected person.

Garrett was isolated at home because he was “feeling sick,” according to Browns coach Kevin Stefanski. The NFL has told teams to keep any players showing COVID-19-like symptoms away from their facilities until they can be tested again.

Stefanski said Garrett, who has 9 1/2 sacks and been dominant all season, has not tested positive. He could be back by Friday, pending test results over the next two days.

The Browns had a similar situation a few weeks ago with receiver Odell Beckham Jr.

“You know how it is when guys are sick,” Stefanski said. "It is not like the old days where you say, ‘All right, come on in later in the day.’ You can’t do that.”

They joined fullback Andy Janovich and offensive lineman Chris Hubbard, who were previously placed on the list. Janovich played in Sunday's win over Houston.

On top of that, Browns starting center and NFLPA President JC Tretter missed practice with an excused absence.

Stefanski couldn't elaborate on whether Conklin, Parkey or Hughlett tested positive for coronavirus, but it's believed they've been identified as “high risk” due to exposure with a non-staff member who recently tested positive. As long as they continue to test negative, they'll be able to face the Eagles (3-5-1).

“We are going to keep that same mentality of adapt to whatever happens, and next man-up mentality,” Mayfield said. "Whatever happens, happens. We can’t control a lot it. We can only hope to improve and move forward.”

In the meantime, the Browns are holding all meetings virtually as they continue to practice NFL-mandated intensive protocols, which the league is requiring teams to do for the remainder of the season starting Saturday to mitigate the virus' spread. The measures call for masks to be worn at all times at facilities, including during practice and in weight rooms. Meals must be available for grab-and-go to avoid players and staff congregating in cafeterias.

The Browns have had to shut down their headquarters twice since Friday in order to do contact tracing after being informed of positive tests. They also put Mayfield on the COVID-19 list for a few days after he had contact with a positive staffer.

Mayfield said there was an actual benefit from being away from the team.

“When you are sitting there at home, you want to be at practice and you want to be with everybody, but to me, it kind of makes you lock in a lot more mentally because you know you are not getting the physical reps,” he said. "With the guys that are in the protocol right now, I think they will handle it just as that is.”

With Conklin out and his backup, Hubbard, still not available, Stefanski said Kendall Lamm is currently the team's starting right tackle and may have to face the Eagles, who have one of the league's best pass rushes.

“Kendall works extremely hard,” Stefanski said. “He fits the bill of the guys that we’re looking for, and he does a great job at practice. I see him a lot because he gets a ton of reps on the scout team, so he’s blocking Myles Garrett many times, Olivier Vernon. So he gets great work during the week.

“He’s a very conscientious person, player, studies real hard. So should he be the guy, he’ll be ready to go.”

Hughlett has been the Browns' snapper since 2015. Stefanski said linebacker Mack Wilson is among the candidates to fill in if Hughlett he can't play.

Parkey is 11 for 12 on field-goal tries this season. He made a 41-yarder in blustery conditions Sunday in Cleveland's 10-7 win over Houston.