Browns place Hubbard on COVID list, game against Texans on 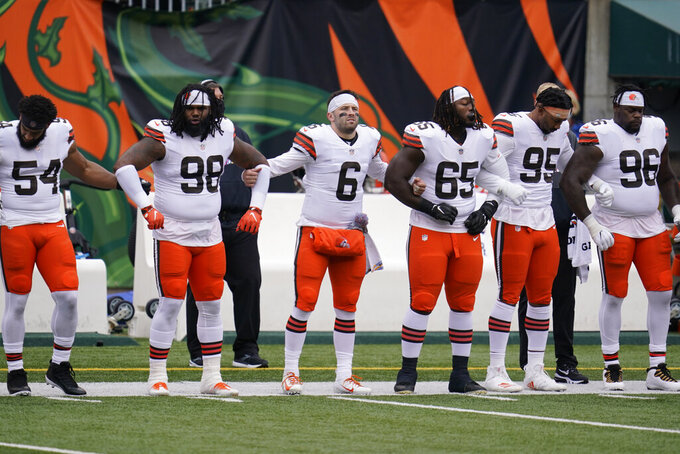 CLEVELAND (AP) — The Browns came back from their bye week healthier than they've been in a month only to have an unexpected scare.

Two days before facing Houston, Cleveland placed offensive lineman Chris Hubbard on the COVID-19 list after shutting down its facility and delaying practice Friday to do contact tracing that fortunately didn't turn up any other “high-risk" cases.

Hubbard will miss Sunday's game against the Texans. He had started Cleveland's past three games at right guard for Wyatt Teller, who is back and will play after missing three games with a strained calf.

Once they learned of Hubbard's positive test, the Browns — who had already been adhering to intensive protocols this week after a staff member tested positive for the coronavirus last weekend — immediately began contact tracing.

The team said “zero high-risk contacts were identified,” and that Hubbard was the only player going on the COVID-19 list.

“We just try to follow all the protocols to a T,” coach Kevin Stefanski said. "We met virtually this morning, which we were doing already. We just basically had to push back the day a little bit. Obviously, every single day, it is part of how we operate.

"I think also a big part of this is not having any high-risk close contact is really a main goal of ours today and moving forward every day. It is something we take very seriously.”

While Hubbard won't be able to help, the Browns are expected to get back star running back Nick Chubb after he missed four games with a sprained right knee.

Chubb had a good week of practice and Stefanski was waiting to meet with the team's medical staff before activating the 24-year-old, who was the NFL's second-leading rusher in 2019.

All signs point to Chubb playing.

"We wanted to use each one of these days and see how he responded each day,” Stefanski said after the Browns' delayed workout. “He hit all of the benchmarks, so it’s just a matter of making sure we’re all on the same page in making sure that he’s ready to go.

"If he’s ready, he’ll be out there. And if we feel like he’s not ready this week, then we’ll make that decision. We are going to do what is best for Nick and best for the Browns.”

Cleveland's week after the bye began with quarterback Baker Mayfield missing practice Monday after he was placed on the reserve/COVID list last weekend when the Browns were off. Mayfield had close contact with the unidentified positive staffer. He returned on Wednesday.

The Browns have held all their meetings virtually this week, and players were required to wear a mask or shield during practice.

NFL spokesman Brian McCarthy said Sunday's game against the Texans at FirstEnergy Stadium will not be affected.

“There’s no change to the status of the game,” McCarthy said in an email. “The goal is to test, isolate the individual, conduct contact tracing and stop the spread of transmission amongst the club. We have been successful in doing so and everyone in the NFL family will continue to remain vigilant in fighting the virus.”

Stefanski said his players adjusted well during an extraordinary week.

“We have changed the schedule on our players about 500 times so they roll with the punches,” he said. "They know that is kind of how things go.”

Cornerback Denzel Ward and linebacker Sione Takitaki weren't cleared in time for practice, but Stefanski expects both to be in the building Saturday.

NOTES: Chubb didn't have a brace on his knee for the second straight day. Rain is in the forecast, but Stefanski doesn't think that will affect the decision on whether Chubb plays. ... Stefanski said he leans on center and NFLPA President JC Tretter to navigate the COVID protocols and the Browns have numerous contingency plans in place in the event players are ruled out. “You have to. This is 2020,” he said. "Things are going to come your way, and you have to react. I think our team is used to that. We got our work in and got all the reps we were supposed to get. It just was a little bit darker out there.”