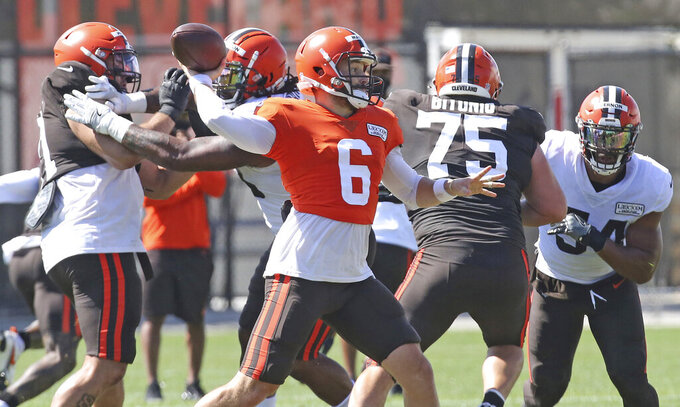 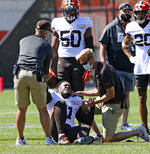 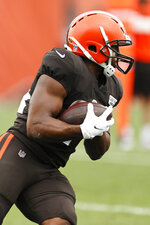 BEREA, Ohio (AP) — The Browns' first significant injury of 2020 is self-inflicted. Cleveland might have a second one.

Pro Bowl running back Nick Chubb has been placed in concussion protocol after he sustained a head injury while being tackled around the neck by starting linebacker Mack Wilson during the team's first fully padded practice on Monday.

And not long after first-year Browns coach Kevin Stefanski announced Chubb's concussion on Tuesday, Wilson, who was demoted to the second-team defense for hurting his teammate, sustained a left knee injury while breaking up a pass and had to be carted off the field.

Wilson sustained a hyperextended knee and will miss some time, a person familiar with the injury told the Associated Press on Tuesday night. A timetable for Wilson's return will be determined after further evaluation, said the person who spoke on condition of anonymity because of the sensitivity of the situation.

Per league rules, Chubb, who finished second in the NFL last season with 1,494 yards rushing, will have to pass several neurological tests before he’ll be permitted to return.

The linked injuries to two starters — the team is also missing starting center JC Tretter following knee surgery — are hardly ideal for Stefanski, who is already trying to cram as much as he can into training camp after not being able to work with his team on the field earlier this year because of the coronavirus pandemic.

The Browns open the season in Baltimore on Sept. 13.

Chubb's injury came after Stefanski said he had spoken to his team about the importance of not being overly aggressive during its first workout in shoulder pads. Chubb caught a short pass and was running toward the sideline when he was brought down by Wilson's high tackle.

Stefanski didn't specifically comment on Wilson's reckless play but said it was fair to say he wasn't happy with losing one of his best players to such aggressiveness.

“Yeah, that was disappointing,” he said. “We've got to be smart. We've got a lot of work to do and we're going to continue to have our pads on and we've got to make sure as a team that we get our work done and get it done while taking care of each other.”

Before the Browns scrimmaged 11 on 11 on Tuesday, Stefanski gathered his players to presumably deliver the same message.

During a 7-on-7 drill, Wilson, the second-year linebacker from Alabama, appeared to twist his left knee while lunging to break up a pass over the middle. He immediately grabbed his leg, crumpled to the ground and could be heard yelling in pain.

Wilson only put a little weight on his leg while being helped to the sideline, where a trainer worked on him before he was taken back to the team's facility on the cart. Wilson pressed his hands against his head for much of the short ride.

Wilson showed some promise when he started 14 games as a rookie last season after Christian Kirksey got hurt.

The loss of Wilson for any length of time would be a damaging blow to Cleveland's depth at linebacker. The unit is already thin and lacking experience. Tae Davis took Wilson’s spot after he left and Willie Harvey also took some snaps alongside B.J. Goodson and Sione Takitaki.

Chubb's injury deprives the Browns of one of their best players.

The third-year back hasn't missed a game since being drafted in the second round in 2018. Chubb was in line to win the league rushing title last year before he was surpassed by Tennessee's Derrick Henry in the final week.

While Chubb is sidelined, Kareem Hunt will be Cleveland's primary ball carrier. He's in his second season with the Browns, who signed him as a free agent last year after he was released by Kansas City following a violent off-the-field incident that resulted in an eight-game league suspension.

Hunt was the league's leading rusher as a rookie with the Chiefs in 2017.

“Kareem looks great,” Stefanski said. "He is really moving around and has a very good grasp of what we want this offense to look like. Excited for what Kareem has going forward.”

NOTES: Star DE Myles Garrett remains sidelined with a hamstring issue. ... DT Larry Ogunjobi sat out with a groin injury. ... TE David Njoku declined to explain why he changed his mind after asking the Browns to trade him earlier this summer. Njoku then gave some conflicting comments when he said he's in Cleveland “for the time being” before later saying he wanted to be with the Browns “long term.”