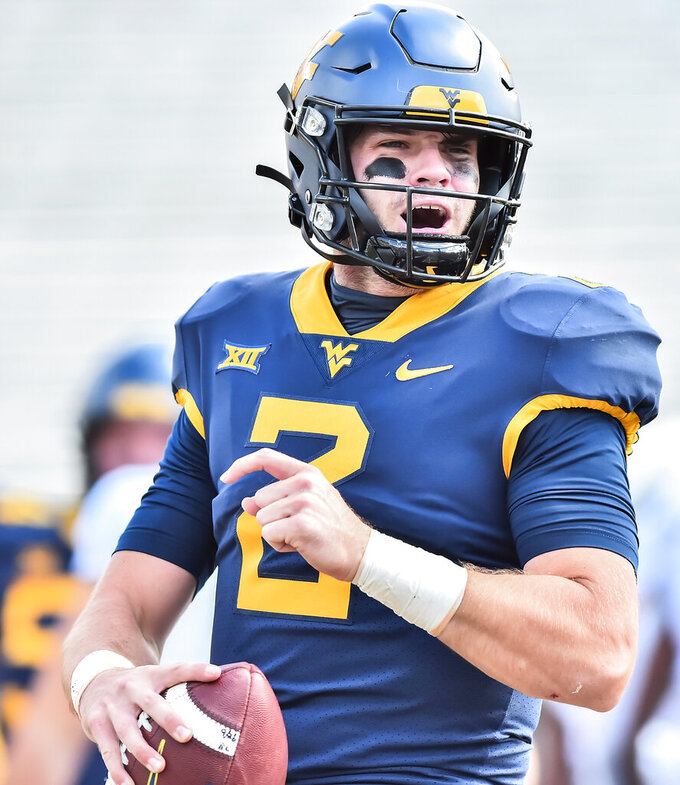 MORGANTOWN, W.Va. (AP) — Leddie Brown scored a 3-yard touchdown run in the second overtime after West Virginia's defense made a stop, and the Mountaineers outlasted Baylor 27-21 on Saturday.

West Virginia (2-1, 1-1 Big 12) squeaked out the win in a game where offensive consistency was rare and mistakes were plentiful. Baylor (1-1, 1-1) surpassed 200 rushing yards a week ago against Kansas but managed 256 yards overall against West Virginia.

“It wasn’t a thing of beauty, but offensively we didn’t lose the game,” said West Virginia coach Neal Brown. “A lot of credit to our offensive guys for regrouping, not getting down, and finding a way to put the ball in the end zone twice in overtime.”

West Virginia sophomore Tykee Smith made an over-the-shoulder catch on a pass intended for Trestan Ebner along the line in the back of the end zone. The call was upheld upon review.

“I feel bad for our group,” Baylor coach Dave Aranda said. “Going back to the beginning of the week, the energy, I thought we had some good practices. You could feel some momentum building. Just to come up short and kind of be right there, and see the hurt on their faces, hurts me. A lot of lessons to be learned.”

The Mountaineers needed five plays to score on their second-overtime possession with Brown covering the final 12 yards on three rushes. Brown finished with 93 yards, falling short in his bid for three straight 100-yard efforts to start the season.

Baylor forced overtime with the score tied at 14-14 when Brewer found Josh Fleeks with a 34-yard touchdown pass with 1:19 left in the fourth quarter.

The teams traded touchdown passes in the first overtime, with West Virginia's Jarret Doege finding Bryce Ford-Wheaton from 6 yards out, and Brewer hitting tight end Ben Sims for a 25-yard score on the first play of Baylor’s possession.

On the game’s opening drive, Doege took the Mountaineers downfield in 15 plays for his own short touchdown run.

Things unraveled quickly after that.

Doege fumbled twice after getting hit while attempting to pass. Baylor recovered one of them at the West Virginia 19 but couldn’t take advantage. John Mayers missed both of his field goal attempts. Noah Rauschenberg’s 51-yard try was blocked as the second-quarter clock expired.

Doege completed 30 of 42 passes for 211 yards and was intercepted twice.

Baylor: Missed field goals, a dozen penalties and a lethargic run game cost the Bears a chance to pull out yet another overtime win. Last year Brewer led Baylor on a pair of game-winning drives in the fourth quarter and two others that tied games which Baylor won in overtime.

West Virginia: In front of a few hundred relatives of players and coaches, the Mountaineers held the ball 46 minutes on offense, but the defense stood out in this one. After a quiet start to the season, West Virginia defensive linemen Darius Stills had another solid effort against Baylor with 2.5 sacks. West Virginia now has 19 sacks against the Bears over the past three meetings.

“I see opportunity, I take it,” said Stills, the Big 12 preseason defensive player of the year.

Ebner, who scored four touchdowns a week ago, including on a kickoff and a free kick after a safety, was limited to 53 all-purpose yards Saturday.

West Virginia starting left guard James Gmiter announced before the game on Twitter that he tested positive for the coronavirus. West Virginia’s marching band canceled its appearance at the game after two positive cases were confirmed Friday night, the band said on its Facebook page. The band had been scheduled to perform from the stands.

Players from each team briefly locked arms on their respective sidelines prior to kickoff to support the fight against racial injustice.

Baylor has a week off before hosting No. 17 Oklahoma State on Oct. 17.