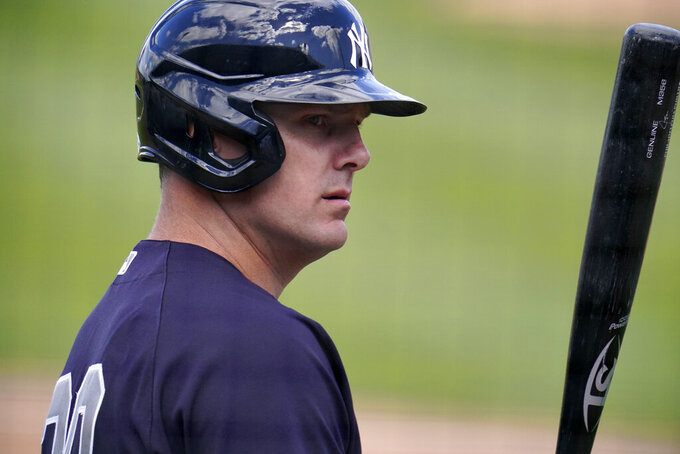 Jay Bruce returned to the major leagues Saturday, making the New York Yankees' roster at the deadline for decisions on free agents who had gone to spring training with minor league contracts.

The Chicago Cubs told infielder Eric Sogard he will be added.

Detroit, having already told pitcher Julio Teheran he will be on the roster, informed pitcher Derek Holland he will be added and decided to pay a $100,000 retention bonus to keep pitcher Erasmo Ramirez.

Under baseball's collective bargaining agreement, players who became free agents after the World Series and then went to spring training with minor league contracts had to be told by noon EDT Saturday that they would be added to the 40-man roster, paid the retention bonus or released.

Released players can re-sign with the same team.

Miami paid the retention bonus to catcher Sandy Leon, the only other player given the bonus.

Cincinnati released right-hander Noé Ramirez, acquired in December when the Reds traded reliever Raisel Iglesias to the Angels. Ramirez gets $284,274 termination pay rather than a $1,175,000 salary.

Francisco Lindor had three hits and three RBIs for New York. Pete Alonso and Dominic Smith hit back-to-back homers in the seventh, and Joey Lucchesi pitched 4 2/3 innings of one-run ball in relief. Lucchesi is a leading contender for the fifth-starter job with the team.

Lindor has a team-high 14 RBIs in his first spring with the Mets.

Houston scratched Myles Straw due to health and safety protocols related to COVID-19. It was not clear whether Straw had tested positive or if it was contact related. Straw is expected to take over in center field for George Springer, who signed with Toronto in the offseason.

Yankees shortstop Gleyber Torres went 3 for 3 with two home runs, a solo shot in the third and a two-run shot in the fourth. Mike Ford had four hits, and Jhoulys Chacín pitched 2 2/3 scoreless innings.

Anthony Kay pitched 2 2/3 innings for Toronto before departing with a lower right leg contusion. He was charged with two runs and seven hits.

Julio Teheran was roughed up in his fifth appearance for Detroit, surrendering six runs and three hits in 3 2/3 innings. Grayson Greiner hit a leadoff drive in the eighth, sparking an eight-run rally.

The Tigers optioned struggling reliever Joe Jiménez to Triple-A Toledo. First baseman Renato Núñez, who led the team with 12 homers last season, is weighing his options after being informed that he didn't make the opening-day roster.

Kevin Newman and Bryan Reynolds each had three hits for Pittsburgh. Newman is batting .714 (20 for 28) this spring.

Josh Donaldson had one of Minnesota’s four hits — all singles. Alex Colomé worked a scoreless inning in relief.

Cleveland ace Shane Bieber struck out nine in 5 2/3 innings in his final start before opening day. Cesar Hernandez homered for the Indians, and Eddie Rosario drove in two runs.

Dodgers right-hander Trevor Bauer struggled with his control in the first, came out of the game for an out and returned to complete 5 2/3 innings. He was charged with three earned runs and four hits.

Jaime Barria opened for the Angels, allowing a hit over two scoreless innings. Junior Guerra got three outs and was charged with two runs and two hits.

Lorenzo Cain and Jackie Bradley Jr. returned to Milwaukee's lineup. Cain had been sidelined by a strained right quadriceps, and Bradley was out with a sore right wrist.

Brandon Woodruff struck out seven in 4 1/3 innings for the Brewers, permitting two runs and four hits.

Ronald Acuña Jr. hit a leadoff homer, his fifth long ball of the spring, and Max Fried tuned up for his opening day assignment with three shutout innings of two-hit ball for Atlanta. The left-hander struck out five, walked two and finished the spring with a 1.38 ERA.

Austin Riley delivered a three-run double, and Marcell Ozuna had a two-run single.

All-Star starter Sandy Alcantara went three innings for Miami, allowing one run and three hits with three strikeouts and no walks. He wrapped up a strong spring with a 1.33 ERA.

Touted prospect JJ Bleday, the fourth pick in the 2019 amateur draft, homered, tripled and drove in two runs for the Marlins. Jon Berti went 2 for 2 with a triple.

Jack Flaherty struck out four in three innings for St. Louis. He permitted just an unearned run and three hits.

Nico Hoerner drove in two runs for Chicago, and Anthony Rizzo had an RBI double. Shelby Miller started and struck out four in three innings. He gave up one run and two hits.

Scott Kazmir started for San Francisco and gave up five runs and six hits over 3 2/3 innings. He struck out three and walked one.