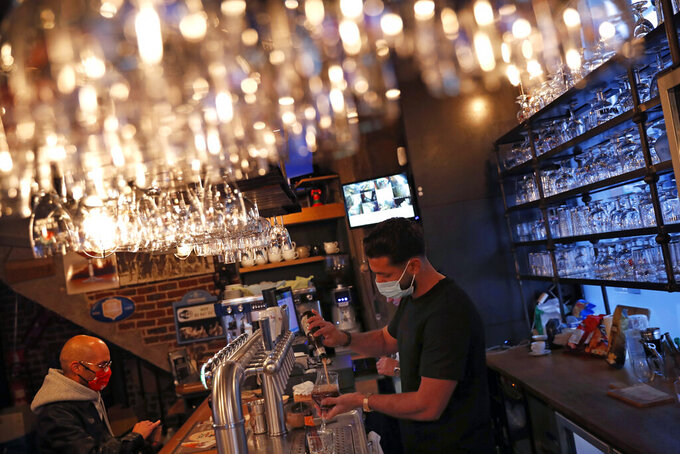 A bartender, wearing a face mask to fight against the spread of coronavirus, serves a beer to a customer in a pub in Brussels, Wednesday, Oct. 7, 2020. Brussels on Wednesday decided at that all bars, dance halls and cafeterias will have to close for a month to counter a surge in coronavirus cases leaving beer lovers and revelers in a bind. (AP Photo/Francisco Seco)

BRUSSELS (AP) — Brussels authorities on Wednesday decided that all the city's bars, dance clubs and cafeterias will have to close for a month to counter a surge in new coronavirus cases, leaving beer lovers and revelers high and dry.

The measures in the Belgian capital will come into effect Thursday. They go beyond nationwide restrictions that were announced only Tuesday, which ordered bars to close at 11 p.m.

But because the pandemic is hitting the capital especially hard, the Brussels region said additional action was needed. The city hosts the European Union headquarters, which draws in people from 27 nations.

“We decided that bars, cafes but also tea rooms will have to close their doors and remain closed,” said Brussels Minister President Rudi Vervoort.

Drastic action is needed because Belgian cases increased again over the week ending Oct. 3, spiking 57% compared to the previous week. The daily average over that period went from 1,570 to 2,466 new infections a day.

Brussels has stood out as the main center of concern.

Despite the necessity, many rue the fact that the bar scene will be hit again after it already had to adapt a lot since the crisis broke in March.

“Now we are told to close for a month when (we haven't) even recovered from the first lockdown," said Sebastien Vandenheede, who owns the Manneken Pis cafe in central Brussels. “So shutting down a second time is a very bad signal for the population and the economy."

It also affects consumers, left again at a loss as to where to go. And this time, with rain and cold ever more present, the streets and terraces offer less of an option.

“I do not (know) where I should date anymore,” lamented Vladimir Li, a 30 year old Belgian working in advertising.

At best, bars will open again in early November.