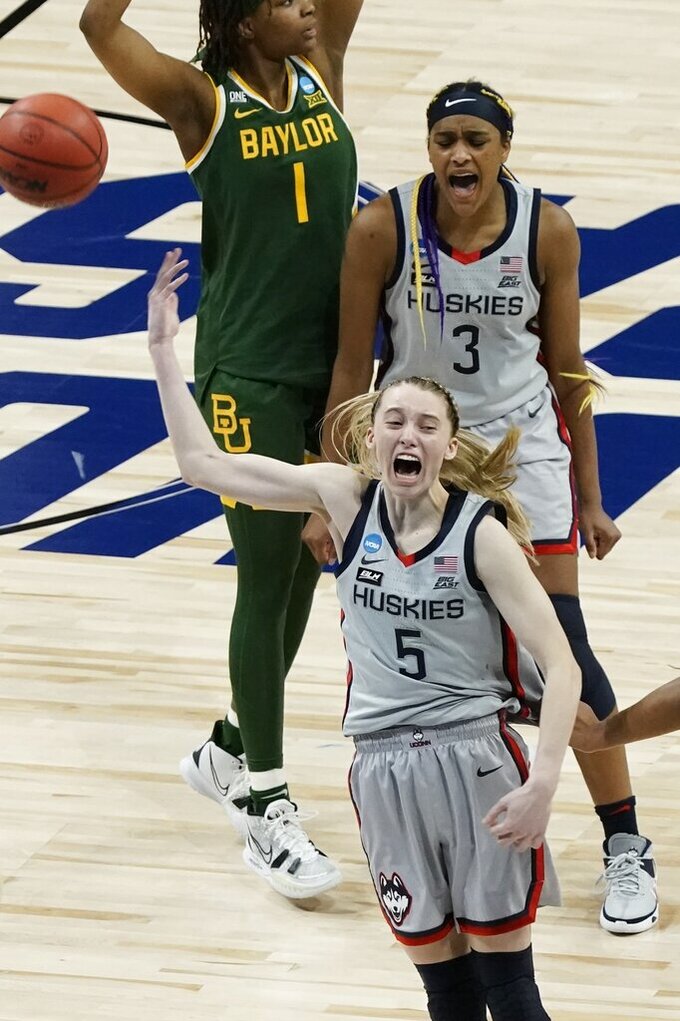 UConn's Paige Bueckers celebrates after an NCAA college basketball game against Baylor in the Elite Eight round of the Women's NCAA tournament Monday, March 29, 2021, at the Alamodome in San Antonio. UConn won 69-67 to advance to the Final Four. (AP Photo/Morry Gash)

SAN ANTONIO (AP) — One is a freshman who stepped into the job of leading the most successful program in women’s basketball. The other is a senior who accepted the call to build one of the worst into one of this season’s best.

Together, UConn’s Paige Bueckers and Arizona’s Aari McDonald are two of the most dynamic scorers in the country heading into their Friday night clash in the women’s NCAA Tournament Final Four.

UConn won the River Walk region and rides into its 13th consecutive Final Four as Bueckers this week became the first freshman to win The Associated Press national player of the year award.

The challenge for Bueckers this season was learning how to lead a program that had already produced some of the game’s greatest players — including Rebecca Lobo, Sue Bird, Diana Taurasi, Maya Moore and Breanna Stewart — in the Huskies' charge for a potential 12th national championship.

Before the season began, UConn coach Geno Auriemma considered bringing her off the bench just to ease her into the role. Two weeks of watching Bueckers in practice tossed that idea “out the window,” he said.

Bueckers led the Huskies (28-1) in scoring, assists and steals this season and scored 28 points in their 69-67 regional final win over Baylor. Auriemma this week called Bueckers “dominant” in “the biggest games we played.”

But she’s still a freshman playing in her first Final Four at a program where winning it all is the annual demand. UConn hasn’t made it to the championship game since 2016.

“She’s still a young kid who was playing against high school girls last year, so yeah, this is big. Nothing that I say is gonna change the bigness of it,” Auriemma said. “I’m sure there’s a part of her that, you know, is anxious, nervous, all the things that you would be if you were her in a game like this ... But somehow, someway, she finds what all great players do. She finds that thing that she has inside of her that very few people have, that allows to her to function in those big moments.”

McDonald’s burden was to build a winner at a program stuck in a basketball desert. Coach Adia Barnes put that job on her as soon as McDonald transferred from Washington in 2017 when the Wildcats were living at the bottom of the Pac-12.

McDonald sat out the 2017-2018 season and watched at Arizona won just six games. Now she is the conference player of the year and has the Wildcats on level ground with the Huskies for at least one more day.

“It’s crazy. We really started at the bottom,” McDonald said. “Coach (Adia) Barnes and the other coaches. They do a great job recruiting. They changed the culture since I’ve been here. My teammates have put in so much work and it’s exciting to see it all pay off.”

The Wildcats (20-5) won the Mercado region as a No. 3 seed. McDonald has scored at least 31 points in each of the Wildcats previous two games. Against Indiana in the regional final, she twisted her left ankle with 2:35 left, but limped back on to put the exclamation on the win with a 3-point play. She said the ankle should be fine Friday night.

“Nobody thinks we can win. We’re the underdogs We’re going to play loose and free” McDonald said.

The UConn-Arizona winner advances to Sunday’s final against the winner of Friday’s other semifinal matchup between Stanford and South Carolina.

BACK TO THE FUTURE

Auriemma and Barnes met in the 1998 women's NCAA Tournament when Barnes the point guard led Arizona to the Sweet 16, in what had been the school’s deepest tourney run. UConn won 74-57, but Auriemma remembers Barnes, who was the conference player of the year that season, as an “impossible matchup.”

UConn’s Christyn Williams has the difficult job of defending McDonald, who uses the quick bursts in her 5-foot-6 frame to blow by defenders on drives into the lane or sneak through traffic for wide-open 3-pointers. McDonald made five of six from long range against Indiana. She also grabbed 11 rebounds.

“She’s a great player, very quick, she can get to the basket, she can create space for herself,” Williams said. “She’s a handful.”

Williams drew a similar assignment in the Sweet 16 and was able to contain Iowa’s Caitlin Clark, the nation’s leading scorer, holding her to 21 points, six below her average.

Arizona is the first women's team to make the Final Four after missing the previous 10 NCAA Tournaments. They likely would have made the tournament last season but it was cancelled due to the coronavirus pandemic. Barnes is the sixth coach to lead their alma mater to the Final Four. She also joins South Carolina’s Dawn Staley in the first time two Black women head coaches have made to the national semifinals.