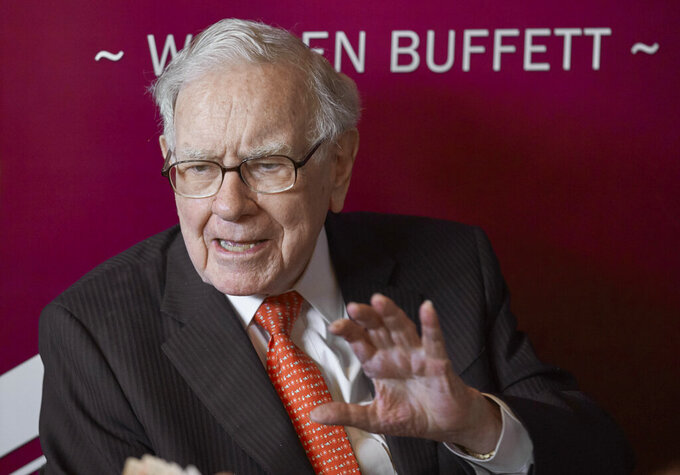 OMAHA, Neb. (AP) — Billionaire investor Warren Buffett doesn't know how or when the economy will recover from the coronavirus outbreak shutdown, but he remains optimistic in the long-term future of the United States.

Buffett said Saturday at Berkshire Hathaway's online annual meeting that there's no way to predict the economic future right now because the possibilities are still too varied. Berkshire's meeting was held without any of the roughly 40,000 shareholders who typically attend because of the virus.

"We do not know exactly what happens when you voluntarily shut down a substantial portion of your society," Buffett said because it has never been done. He said it may take several years to understand all the economic implications of the coronavirus outbreak, but it hasn't changed his long-term view because the country has endured wars and depressions before.

“In the end, the answer is never bet against America,” Buffett said.

It's not clear how long the virus will continue to weigh on the economy, Buffett said. He said there could still be unpleasant surprises from the virus and the way people react to it.

“You're dealing with a huge unknown,” Buffett said, so businesses and investors can't be certain of what will happen in the near future.

Buffett said he doesn't expect major banks to have significant financial problems during the virus crisis because they are in much better shape than they were during the financial crisis of 2008.

All of the events surrounding the annual meeting, including a trade show where Berkshire companies sell their products, were cancelled this year because of the coronavirus pandemic, and Buffett had a different partner for the question session.

Instead of sitting next to business partner Charlie Munger in an arena filled with shareholders, Buffett was joined this year by Berkshire Vice Chairman Greg Abel, who oversees all of the company's non-insurance businesses, to answer questions in front of a Yahoo Finance camera.

“It's certainly a break with years and years of tradition with Buffett and Munger,” said Andy Kilpatrick, a retired stockbroker who wrote a Buffett biography and has attended every annual meeting since 1985.

The fact that Abel appeared alongside Buffett will add to speculation that he could one day succeed the 89-year-old billionaire as CEO, but it likely also reflects the fact that Abel is based relatively close to Omaha, in Des Moines, Iowa. Abel and fellow longtime executive Ajit Jain, who oversees Berkshire's insurance businesses, are seen as the two most likely successor candidates although Buffett has no plans to retire.

Omaha missed out on the profits that comes from all the out-of-town visitors attending the meeting. Local economic development officials estimate that Berkshire Hathaway's annual meeting normally provides a $21.3 million boost to the area.

Buffett and Abel discussed the nearly $50 billion loss that Berkshire reported Saturday morning and the huge pile of cash the company is holding.

The biggest factor in the loss was a $54.5 billion loss on the value of Berkshire's investment portfolio as the stock market declined sharply after the coronavirus outbreak began.

Berkshire’s revenue grew 1 percent to $61.27 billion. The company said revenue slowed considerably in April as the virus outbreak negatively affected most of its businesses. Berkshire closed several of its retail businesses, such as See’s Candy and the Nebraska Furniture Mart, this spring while BNSF railroad and its insurance and utility businesses continued operating while adjusting to reduced demand.

Berkshire is sitting on a pile of more than $137 billion cash because Buffett has struggled to find major acquisitions for the company recently and he wants to be prepared to endure any crisis. Edward Jones analyst Jim Shanahan said it was striking that Buffett didn't find any bargains to invest in at the end of the first quarter.

“The lack of investment activity really sticks out,” Shanahan said.

Buffett said that Berkshire sold roughly $6.5 billion of stock in April when it unloaded his company's roughly 10% stakes in the four largest airlines. Buffett said he decided that he made a mistake in how he valued airlines, so he sold all of Berkshire's American, Delta, Southwest and United Continental airline stock.

Buffett said he hasn't made any big deals during the coronavirus crisis because he hasn't seen any on attractive terms. He said many companies have been able to borrow money in the market in the past two months because the Federal Reserve stepped in to keep markets moving, so they haven't turned to Berkshire for help.

Berkshire Hathaway Inc. owns more than 90 companies, including the railroad and insurance, utility, furniture and jewelry businesses. The company also has major investments in such companies as Apple, American Express, Coca-Cola and Bank of America.