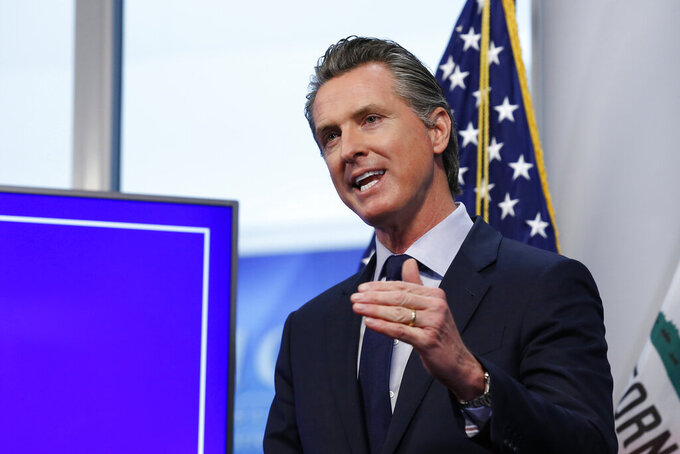 FILE — In the April 14, 2020 file, Gov. Gavin Newsom discusses an outline for what it will take to lift coronavirus restrictions during a news conference at the Governor's Office of Emergency Services in Rancho Cordova, Calif. Newsom announced an 80-member Task Force on Business and Jobs Recovery on Friday, April 17, 2020, to help revive California's economy in the wake of the COVID-19 pandemic. (AP Photo/Rich Pedroncelli, File)

SACRAMENTO, Calif. (AP) — As Gov. Gavin Newsom turns his attention to the economic devastation in California brought on by the coronavirus pandemic, he's turning to the heads of some of the country's biggest companies, labor unions, four former governors and other political allies to lead the effort.

“I have asked and tasked some of the best and brightest minds that we could source — a disproportionate number almost exclusively reside here in the state of California,” he said.

“We recognize our unique responsibility as Californians to do our fair share, and to help lead the way in terms of job creation, retention and job growth,” Newsom said Friday during his daily news conference on the state's response to the pandemic.

The Task Force on Business and Jobs Recovery, with more than 90 members, Newsom said, will focus on reviving the economy in the nation's most populous state. More than 3 million of the state's nearly 40 million residents have filed for unemployment, and a recession has officially begun.

It will be led by Newsom's chief of staff, Ann O'Leary, and Tom Steyer, the billionaire philanthropist and former businessman who sought the Democratic nomination for president earlier this year.

Steyer has become one of the nation’s most prominent Democratic donors, spending millions of dollars of his own money on political organizations aimed at tackling climate change and impeaching Republican President Donald Trump.

“To name someone who has just spent the last two-plus years putting themselves on TV as a hyper-partisan and then, obviously, ran for president, just doesn’t make sense,” said Rob Stutzman, a Republican former adviser to Gov. Arnold Schwarzenegger.

Also named to the council are Schwarzenegger, a Republican, and California's other three living former governors — Republican Pete Wilson and Democrats Jerry Brown and Gray Davis. Appointing all four, regardless of their party, could help “smooth the edges,” of Steyer's appointment, said Sherry Bebitch Jeffe, a communications professor at the University of Southern California.

Davis said Newsom has done a fantastic job tackling the public health crisis, but he said the economic crisis will at some point take center stage.

Newsom will have to work on “reigniting the economy fast enough that people feel the personal sacrifice they endured at the request of the governor was worth the effort," Davis said.

Others on the task force include Bob Iger, the head of Disney; Tim Cook, the chief executive of Apple; Gregory Adams, CEO of Kaiser Foundation Health Plan; Janet Yellen, the head of the Federal Reserve under former Democratic President Barack Obama; Angela Glover Blackwell of PolicyLink, an organization that advocates for racial and economic justice; and the heads of several major unions.

Many of them have their own vested interests in a strong economic recovery as they try to reopen their businesses, increase their profits or put their members back to work.

The announcement comes nearly a month after Newsom issued a statewide stay-at-home order that radically shifted the state's economy, forcing businesses to shut their doors, lay off workers or downsize their operations. And it follows Trump's announcement of a White House economic task force including dozens of business leaders.

Newsom said it's critical that the economic recovery prioritizes addressing racial and economic disparities. Blackwell noted that coronavirus has disproportionately affected African Americans, comparing it to gallons of alcohol being thrown on the nation's “open wounds” of racism and inequality.

Jeffe said the message sent by having Steyer and Newsom's chief of staff as co-chairs is that “Newsom’s going to control this."

The SEIU and its various chapters donated tens of thousands of dollars to Newsom's 2018 gubernatorial campaign.