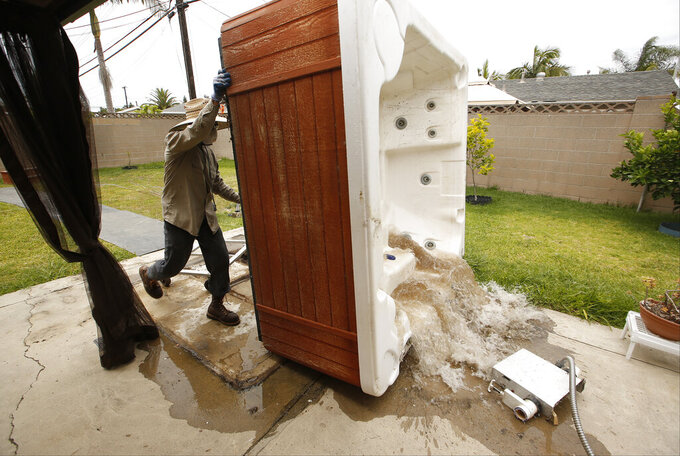 FILE - In this May 6, 2015, file photo, professional spa remover Juan Alexander empties a spa for permanent removal at a residence in which the owner considered it "a waste of water," in Garden Grove, Calif. Gov. Gavin Newsom on Monday, May 10, 2021, declared a drought emergency for most of California, extending a previous order that affected two counties to 41 counties throughout much of the state. (AP Photo/Damian Dovarganes, File)

SACRAMENTO, Calif. (AP) — California Gov. Gavin Newsom on Monday expanded a drought emergency to a large swath of the nation's most populous state while seeking more than $6 billion in multiyear water spending as one of the warmest, driest springs on record threatens another severe wildfire season across the American West.

The Democratic governor said he is acting amid “acute water supply shortages" in northern and central parts of California as he called again for voluntary conservation. Yet the state is in relatively better shape than it was when the last five-year drought ended in 2017, he said, as good habits have led to a 16% reduction in water usage.

His emergency declaration now includes 41 of 58 counties, covering 30% of California's nearly 40 million people, and he said a further expansion is likely as conditions worsen. The U.S. Drought Monitor shows most of the state and the American West is in extensive drought just a few years after California emerged from the last punishing multiyear dry spell.

“We’re staring down at what could be disastrous summer and fall, with the potential of communities running out water, and fires," said Democratic U.S. Rep. Jim Costa, who accompanied Newsom to the announcement made before a Central Valley reservoir with a deep bathtub ring of dry earth surrounded by browning grass.

Like most of the state's extensive interconnected system of reservoirs and canals, the San Luis Reservoir is at less than 60% of its seasonal average as scarce winter rain and snow turns to a dry summer that Newsom said is imperiled by climate change.

That requires the state to envision “a much more resilient, a much more vibrant, much more dynamic water delivery system,” he said, noting that the one largely constructed in the last mid-century to carry water from Northern California to the south, “helped us build the world’s largest middle class" by enabling the state's population and agricultural growth.

The governor is asking state lawmakers to approve what he said is a record $5.1 billion over four years for water projects, plus another $1 billion to help an estimated million Californians who are behind on their water bills in part because of the economic hardship of the pandemic.

Another $200 million would go to repair canals damaged when the ground beneath them sank as more groundwater was pulled from wells.

His expanded drought emergency declaration includes the counties in the Klamath River, Sacramento-San Joaquin Delta and Tulare Lake watersheds across much of the northern and central parts of the state.

The Sierra Nevada snowpack, which provides about a third of the state’s water, was at just 59% of average on April 1, when it is normally at its peak.

This year is unique because of extraordinarily warm temperatures in April and early May, Newsom said. That led to quick melting of the Sierra Nevada snowpack in the waterways that feed the Sacramento River, which in turn supplies much of the state’s summer water supply.

The problem was worse because much of the snow seeped into the ground instead of flowing into rivers and reservoirs, he said.

The warmer temperatures also caused water users to draw more water more quickly than even in other drought years, he said, leaving reservoirs extremely low for farmers, fish and wildlife that depend on them.

That all reduced the state’s water supplies by as much as what would supply up to 1 million households for a year, he said.

Newsom urged residents to limit their use, whether by limiting outdoor watering, checking for leaks, or taking shorter showers and turning off the water when washing dishes or brushing teeth.

Senate Republicans blamed majority Democrats for not building more dams to increase water storage, with GOP leader Scott Wilk saying in a statement that the governor's declaration "does nothing to remove regulatory roadblocks that hold up shovel-ready water projects.”

Newsom is spending the week previewing highlights of the revised budget he will present to state lawmakers Friday for the fiscal year that begins July 1.

Earlier Monday in the San Francisco Bay Area, Newsom proposed tax rebates of up to $1,100 for millions of lower- and middle-income Californians, one leg of a pandemic recovery plan made possible by an eye-popping $76 billion budget surplus.

The barnstorming comes as Newsom faces a fall recall election driven in large part by frustration over his handling of the pandemic, though he noted that he also previewed his budget proposals in the past when he wasn’t facing a recall.

“This expanded #drought declaration should have happened weeks ago,” tweeted former Congressman Doug Ose, one of the Republicans who wants to replace Newsom. “Playing politics like this with people’s livelihoods doesn’t do anybody any good.”

The governor’s fellow Democrats, who control the Legislature, have until June 15 to pass a spending plan.