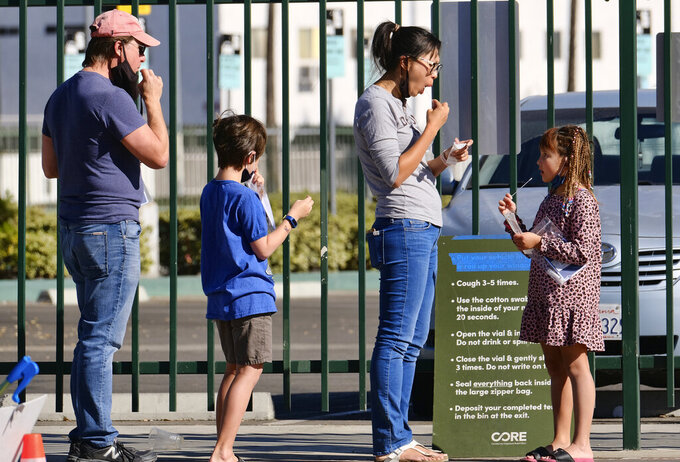 People swab their cheeks at a COVID-19 testing site in the North Hollywood section of Los Angeles on Saturday, Dec. 5, 2020. With coronavirus cases surging at a record pace, California Gov. Gavin Newsom announced a new stay-at-home order and said if people don't comply the state's hospitals will be overwhelmed with infected patients.(AP Photo/Richard Vogel)

The tool — which has been used on a pilot basis on some state university campuses — doesn’t track people’s identities or locations but uses Bluetooth wireless signals to detect when two phones are within 6 feet (1.8 meters) of each other for at least 15 minutes, officials said.

California's 40 million residents can opt in to the system starting Thursday. When someone who has activated the technology tests positive for the virus, that person will receive a verification code from state health officials that can be used to send an anonymous alert to other users who may have been exposed over the past 14 days.

"The more people that participate in it, the more that opt in, the more effective this program can be," Newsom told reporters. “We are hoping there will be enough to make this meaningful.”

The technology comes as coronavirus cases are exploding in California and more than 80% of the state’s residents are under orders not to leave their homes for at least the next three weeks except for essential purposes. Sixteen other states, plus Guam and Washington, D.C., have already made available the system co-created by Apple and Google, though most residents of those places aren’t using it.

Andrew Noymer, a public health professor at University of California, Irvine, questioned how many residents would opt in due to privacy concerns and the value of the tool if they don't.

He said people may find themselves paralyzed by a flood of information and it isn't clear what they'll do with it — especially if they take a coronavirus test after getting an alert and wind up negative, only to receive another alert.

“In a purely epidemiological perspective, uptake is everything. If about 10% of people do it, it's useless,” he said. “Even if it does get takers, it's still unproven. Because then, what do you do?”

Over the past two weeks, California has reported a quarter of a million positive virus cases. The seven-day average for newly reported virus cases on Monday neared 22,000, a 50% increase over the prior week, state data shows.

More than 10,000 people were hospitalized with COVID-19, including more than 2,300 in intensive care, Newsom said.

The state's 400 hospitals are at about 80% capacity but there are hospitals in San Diego, Imperial, and Los Angeles counties with intensive care units that are full, said Carmela Coyle, president of the California Hospital Association. Hospitals are limited by staff shortages following a spike in virus cases around Halloween, she said.

“These numbers do not yet include the Thanksgiving holiday, and the gathering of families just a week or so ago so. We do expect that this will get far worse before it gets better,” she said.

The numbers leave California back where it started 10 months ago with stay-at-home rules, but now fewer people are likely to obey them.

Newsom’s administration issued the stay-at-home rules closing restaurant dining, salons and playgrounds in Southern California and a large swath of the Central Valley agricultural region after more than 85% of intensive care units were occupied in those regions. Five San Francisco Bay Area counties voluntarily joined the rules over ICU capacity concerns, and restrictions there will last until Jan. 4, a week longer than the state’s timeline. Retailers including supermarkets and shopping centers can operate with 20% capacity.

The U.S. Forest Service announced that it was closing developed campgrounds in eight national forests in the state's Southern California and San Joaquin Valley regions to be consistent with the state order, and said other closures were possible. The park said day use of the forests will be allowed.

“Campgrounds, like other overnight accommodations, create opportunities for people from differing households and communities to gather” and closing them will reduce COVID-19 exposure to visitors and employees, said a statement from Randy Moore, U.S. Forest Service regional forester for the Pacific Southwest Region.

Some business owners said they would keep their doors open and several law enforcement agencies say they won't enforce the rules and are counting on people to voluntarily wear masks and practice physical distancing to protect themselves and their families. While the Orange County Sheriff has said he won’t send deputies to enforce the state’s virus rules, Santa Clara County recently had firefighters help ensure compliance at area businesses.

Lu Garcia Reynoso, who owns a Southern California barbershop, told the Press-Enterprise she'll stay open despite the latest order and is concerned some salons may move underground to avoid being detected.

“This will encourage people to board up their windows and take clients in secret,” she said.

Morrow also said many hospitals haven't yet canceled elective procedures or taken other steps to enhance capacity. And while it's clear that staying home and wearing masks can help slow the spread of the virus, it isn't clear public health officials know how to get community members to do so, he said.

“I appreciate that some of you think I (or the government) have magical abilities to change everyone’s behavior, but I assure you, I (we) do not,” Morrow wrote in a statement.

Schools that are currently open can continue providing in-person instruction.

But Los Angeles Unified School District, the nation's second-largest, on Monday announced the suspension of all school-based instructional and childcare programs and conditioning programs for student athletes due to the record number of virus cases.

Starting Thursday, Californians will be able to activate the new “exposure notification” tool in their iPhone settings or on Android phones by downloading the CA Notify app from the Google Play store. Many residents will get a notification inviting them to participate.

Officials said the encounters are temporarily logged in a way that doesn’t reveal a person’s identity or geographic location.